Back in 2010, I asked whether the U.S. might be in for a prolonged economic slump, similar to what Canada experienced in the 1990s (The Great Canadian Slump). It looks like the answer should have been "yes."

I think this is an interesting comparison because the slump in Canada was not precipitated by a financial crisis. Moreover, there was no "zero lower bound" issue at the time. Unlike in the U.S. today, the yields on Canadian government debt were high, not low.

Let's take a look at some data. Consider first the employment-population ratio (population of adults), or EPOP for short. 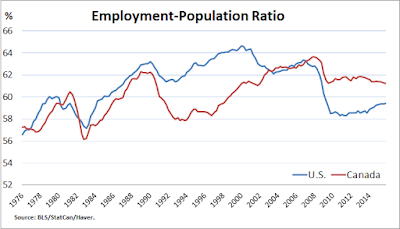 In the early 1990s, employment in Canada dropped very sharply and dramatically. This decline was as severe as the decline in U.S. employment during the great recession. It took roughly a decade for the Canadian EPOP to attain its previous peak. In the Great White North, this episode is called the Great Canadian Slump.

The parallel between these two recovery dynamics, for two different countries, at two different times, is really quite remarkable. The following diagram normalizes the EPOP to 100 at its cyclical peak (1990Q1 for Canada and 2008Q1 for the U.S.) and then plots the recovery dynamic in each case. 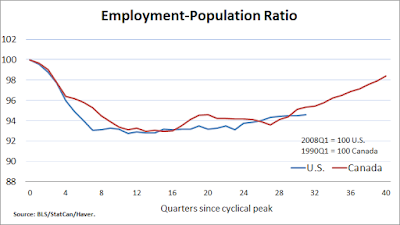 We can repeat the same exercise for the labor-force participation rate (LFPR). 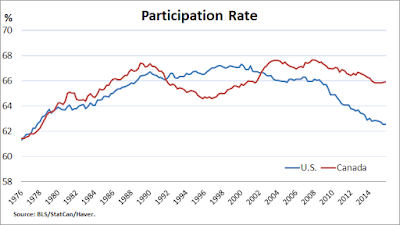 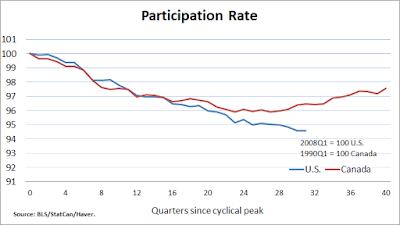 The declining U.S. labor force participation rate has been much talked about, of course. Some analysts believe that the decline is driven primarily by demographics. Canada's LFPR has also declined since 2008, but not nearly as dramatically as the U.S. To the extent that Canadian and American demographics are similar, the comparison above suggests a more prominent role for other factors (e.g., differences in national policies, cyclical conditions, etc.). In an earlier post comparing U.S. border states to Canada and the rest of the U.S., the evidence suggests that differences in national policies may be important: 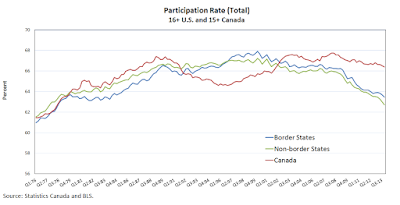 Let me finish up here with one more comparison. Here I plot real per capita GDP against EPOP for Canada: 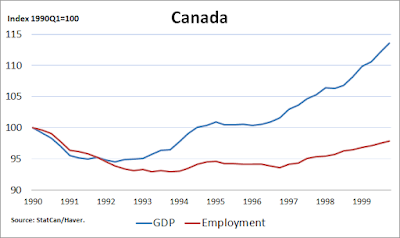 Back then people were talking about "jobless recoveries." As you can see from the diagram above, that's quite a jobless recovery. Here's what the corresponding data looks like for the United States today: 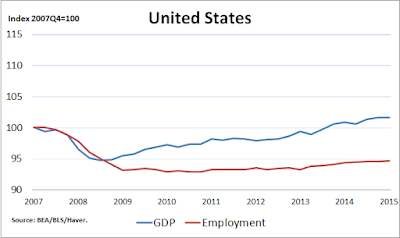 I don't hear too much talk about "jobless recovery" in relation to the U.S. today. The language has shifted to describing this recovery dynamic as "secular stagnation."

I'm still not entirely clear what people mean by term "secular stagnation." The phrase was originally coined by Hansen (1939). Hansen argued that rapid growth in technology and/or population was necessary to keep the economy at "full employment." The proposition sounds like a version of Okun's Law, except that the relationship posited seems to be between the level of employment (EPOP) as a function of the growth rate of the economy.

Hansen did not have much to say about interest rates, except to remark that they're mainly symptomatic and that economists tend to make too much of them. This view seems somewhat different from the one espoused by Larry Summers, who attaches greater significance to low interest rates--even suggesting that they're a defining characteristic of secular stagnation. Moreover, unlike Hansen, he seems to suggest at times that the direction of causality can be reversed; i.e., that a policy that increases the level EPOP can stimulate GDP growth (both in the short and long run, I presume). This latter proposition sounds a bit like Verdoorn's law. I'll have a bit more to say about all this in a future post.

Posted by David Andolfatto at 12:04 PM