What is the yield curve forecasting?

It's well-known that in the United States, recessions are often preceded by an inversion of the yield curve. Is there any economic rationale for why this should be the case?

What is the economic intuition for these claims? One way to think about this is in terms of Friedman’s Permanent Income Hypothesis, which states that an individual’s desired consumption expenditure today should depend not only on current income, but the likely path of his/her income over the foreseeable future. The logic of this argument follows from the assumption that people are willing and able to smooth their consumption over time, given their expectations over how their incomes are likely to evolve over time. For example, if people expect their income to be higher in the future, then they will want to consume more today in order to smooth out their consumption. They can attempt to do so by saving less (or borrowing more). If a community is collectively “bullish” in this sense, desired consumer spending should rise in the aggregate, and desired saving should fall, leading to upward pressure on the real interest rate.

So, in theory at least, an inverted yield curve does not forecast recessions--it forecasts growth slowdowns. Nevertheless, there is a sense in which an inverted (or even flat) yield curve can, in some circumstances, suggest that recession is more likely. Here's the basic idea.

Consider an economy that grows over time, but where growth occurs unevenly (i.e., the economy alternates between high- and low-growth regimes). Imagine, as well, that the economy is occasionally buffeted by negative “shocks”—adverse events that occur at unpredictable moments in time (an oil price spike, a stock market collapse, etc.). It seems clear enough that in such an economy, recessions are more likely to occur when a shock of a given size occurs in a low-growth state as opposed to a high-growth state.

How does this idea match up the data? Here is a plot of the 10-1 real yield spread in the United States from 1985-2018 (blue line) along with the year-over-year growth rate of real per capita consumption--nondurables plus services (orange line). 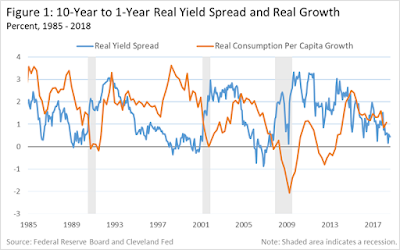 Well, it's not perfect, but as is clear from the figure, the real yield curve flattened and inverted prior to each of the past three recessions. Consistent with the theory, note that consumption growth tends to decelerate as the yield curve flattens. This is true even in non-recessionary episodes. In particular, the consumption growth deceleration of 1985-85, 1988-89, and 2006-07 were each associated or preceded by a flattening or inverted yield curve. Each of the three recessions occurred when consumption was growing at a moderate to low pace.

Were the recessions that occurred following yield curve inversion forecastable? The proximate cause of the 1990 recession was the Iraqi invasion of Kuwait and the associated spike in world oil prices. Is it plausible to believe that bond market participants knew well in advance Saddam Hussein’s plans of invasion? The proximate cause of the two most recent recessions were asset price collapses (some blame Fed tightening, but theoretically gradual tightening should only cause a slowdown in growth, not a sharp collapse). While many people may have had a sense of impending doom, it seems unlikely that anyone knew years in advance the exact date of collapse. According to the interpretation here, the severity of the Great Recession was in part due to the fact that the economy was already growing slowly at the time of the collapse in real estate prices. While consumption growth did slow prior to the collapse of the “dot com” asset price bubble in 2000, it grew at a moderate rate entering that recession. Accordingly, the recession of 2000-2001 is one of the mildest ever recorded.

Does the recent flattening of the yield curve portend recession? Not necessarily. The flattening of the real yield curve may simply reflect the fact that real consumption growth is not expected to accelerate or decelerate from the present growth rate of about 1% per annum. On the other hand, a 1% growth rate is substantially lower than the historical average of 2% in the United States. Because of this, the risk that a negative shock (of comparable magnitude to past shocks) sends the economy into technical recession is increased. While the exact date at which the shock arrives is itself is unpredictable, the likelihood of recession is higher relative to a high real interest rate, high growth economy.
Posted by David Andolfatto at 7:11 AM 1 comment: