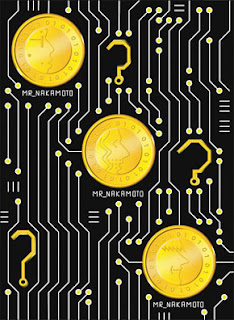 A desirable property of a monetary instrument is that it holds its value over short periods of time. Most assets do not have this property: their purchasing power fluctuates greatly at very high frequency. Imagine having gone to work for gold a few weeks ago, only to see the purchasing power of your wages drop by 10% in one day. Imagine having purchased something using Bitcoin, only to watch the purchasing power of your spent Bitcoin rise by 100% the next day. It would be frustrating.
Is it important for a monetary instrument to hold its value over long periods of time? I used to think so. But now I'm not so sure. While I do not necessarily like the idea of inflation eating away at the value of fiat money, I don't think that a low and stable inflation rate is such a big deal. Money is not meant to be a long-term store of value, after all. Once you receive your wages, you are free to purchase gold, bitcoin, or any other asset you wish. (Inflation does hurt those on fixed nominal payments, but the remedy for that is simply to index those payments to inflation. No big deal.)
I find it interesting to compare the huge price movements in gold and Bitcoin recently, especially since the physical properties of the two objects are so different. That is, gold is a solid metal, while Bitcoin is just an abstract accounting unit (like fiat money).

But despite these physical differences, the two objects do share two important characteristics:

[1] They are (or are perceived to be) in relatively fixed supply; and
[2] The demand for these objects can fluctuate violently.

The implication of [1] and [2] is that the purchasing power (or price) of these objects can fluctuate violently and at high frequency. Given [2], the property [1], which is the property that gold standard advocates like to emphasize, results in price-level instability. In principle, these wild fluctuations in purchasing power can be mitigated by having an "elastic" money supply, managed by some (private or public) monetary institution. This latter belief is what underlies the establishment of a central bank managing a fiat money system (though there are other ways to achieve the same result).
The following graph depicts the rate of return on US money over the past century (the rate of return is actually the inverse of the inflation rate). The US was on and off the gold standard many times in its history. Early on in this sample, the gold standard was abandoned during times of war and re-instituted afterward. While inflation averaged around zero in the long-run, it was very volatile early in the sample. The U.S. last went off the gold standard in 1971. Later on in the sample, we see the great "peacetime inflation," followed by a period of low and stable inflation. 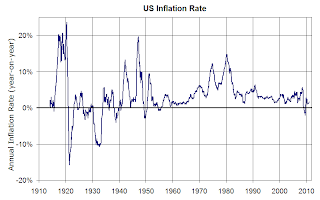 Gold standard advocates are quick to point out the benefits of long-term price-level stability. The volatile nature of inflation early on in the sample is attributed to governments abandoning the gold standard. If only they would have kept the gold standard in place...
Of course, that is the whole point. A gold standard is not a guarantee of anything: it is a promise made "out of thin air" by a government to fix the value of its paper money to a specific quantity of gold. It is possible to create inflation under a gold standard simply by redefining the meaning of a "dollar." For example, in 1933, FDR redefined a dollar to be 1/35th of an ounce of gold (down from the previous 1/20th of an ounce). This simple act devalued the purchasing power of "gold backed money" by almost 60%.
If the existence of a gold reserve does not prevent a government from reneging on its promises, then why bother with a gold standard at all? The key issue for any monetary system is credibility of the agencies responsible for managing the economy's money supply in a socially responsible manner. A popular design in many countries is a politically independent central bank, mandated to achieve some measure of price-level stability. And whatever faults one might ascribe to the U.S. Federal Reserve Bank, as the data above shows, since the early 1980s, the Fed has at least managed to keep inflation relatively low and relatively stable.
Posted by David Andolfatto at 12:53 PM 61 comments:

Krugman has an interesting article today, Monetary Policy in a Liquidity Trap. I (sort of) agree with much of it. But I believe that a few comments are in order.


So, at this point America and Japan (and core Europe) are all in liquidity traps: private demand is so weak that even at a zero short-term interest rate spending falls far short of what would be needed for full employment. And interest rates can’t go below zero (except trivially for very short periods), because investors always have the option of simply holding cash.

First, the quoted passage above suggests that a liquidity trap is the byproduct of "insufficient private demand," with the implication, of course, that more "public demand" is needed to rectify the situation. This may or may not be true. Regardless, the statement is [1], [2], and [3] above. Beware of economists making bald assertions.

Second, the statement is wrong in suggesting that our current liquidity trap is associated with zero nominal interest rates. Liquidity trap phenomena are much more general than this. And if you really want to further your understanding on this matter, please go read this piece by Steve Williamson: Liquidity Traps, Money, Inflation, and Bond Yields. As Steve says: this is not your grandma's liquidity trap.

If this latter view is correct, then "corrective" measures like expanding G or increasing the inflation target are not addressing the fundamental economic problem: low real interest rates as the byproduct of real economic/political/financial factors.

Given these "real" problems, Steve's view is that the Fed is largely irrelevant. But he does assign hope to the Treasury: increase the supply of its securities to meet the world demand for them. I've been making similar arguments for some time now; for example, here.

Apart from all this, it will be interesting to see how the experiment in Japan plays out. Most of the massive purchases announced by the BOJ are for JGBs -- I'm really skeptical what sort of effect this should have (since the operation constitutes swaps of two assets that are close to perfect substitutes--although some purchases will take the form of higher risk assets--see Noah Smith on this). But what I think really does not matter--it is what market participants think--and the program does appear to be having some effect in financial markets.

Thank you, Japan, for this interesting experiment. Domo arigato, gozaimasu!
Posted by David Andolfatto at 9:26 AM 54 comments:

The paper is available here: The Eurosystem Household Finance and Consumption Survey. The cross country comparison of net wealth can be found in Table 4.1 on page 76.

This just doesn't sound right to me, but I haven't gone through the report in detail. Evidently, the differences are driven primarily by real estate wealth. Thankfully (?), Germany escaped the housing price "bubble" that afflicted many European countries; see figure below.

Moreover, as I noted here, the German growth experience over the past 20 years has been nothing to write home about.

April 16, 2013: Update here from VOX, who emphasize that the wealth distribution in Germany distorts the picture presented here.
Posted by David Andolfatto at 9:11 AM 7 comments: