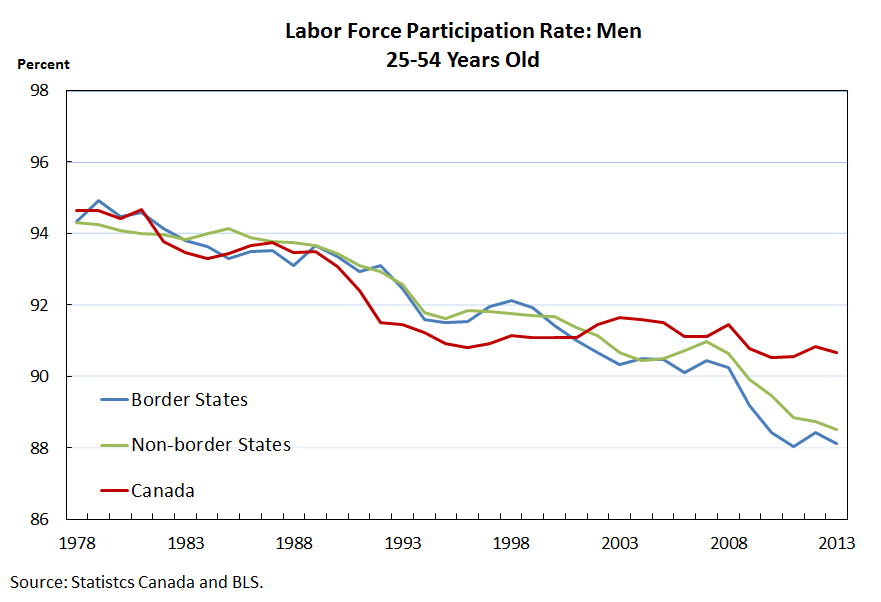 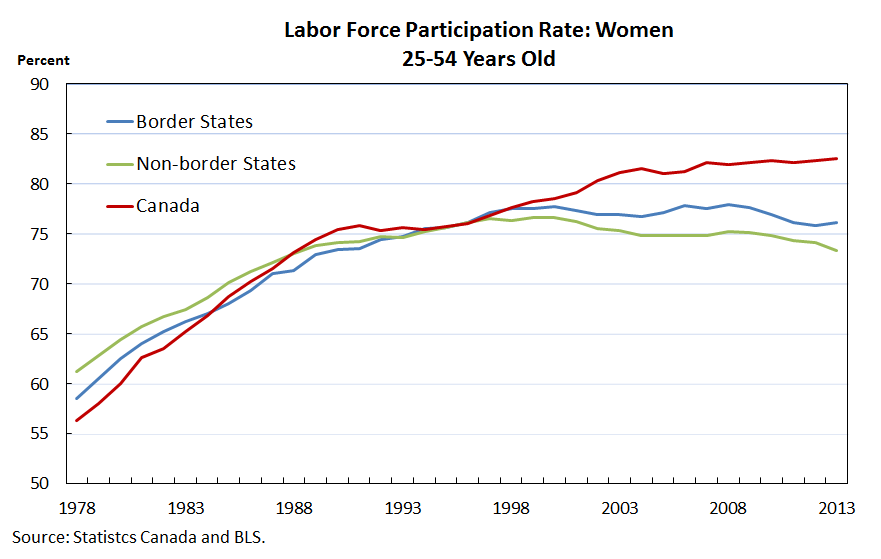 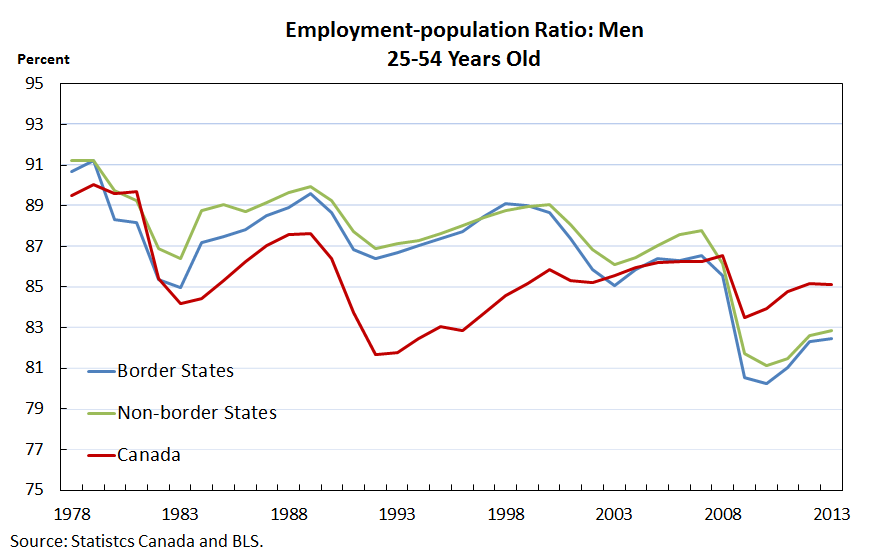 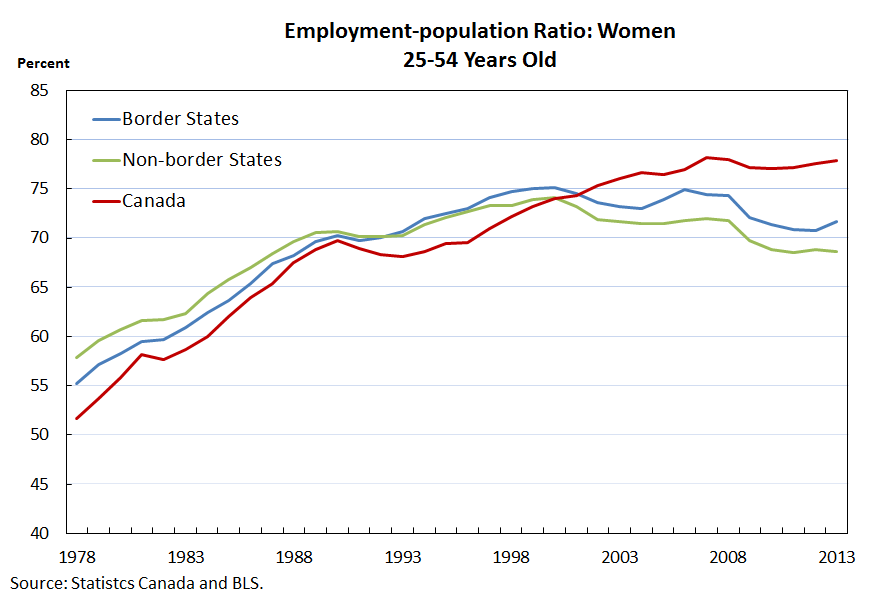 While we can't say for sure just by looking at this data, I suspect that national policy differences are driving much of the different behavior here. But before I start looking for what these policy differences might be, I'll ask my trusty R.A. to look at sectoral decompositions.
Posted by David Andolfatto at 7:02 AM 8 comments:

My colleague Kevin Kliesen supplies me with the following updates on inflation expectations and real treasury yields.

The first two plots show not very much action since the beginning of the year. The latest data show a recent tick down in inflation expectations, and a tick up in real yields: 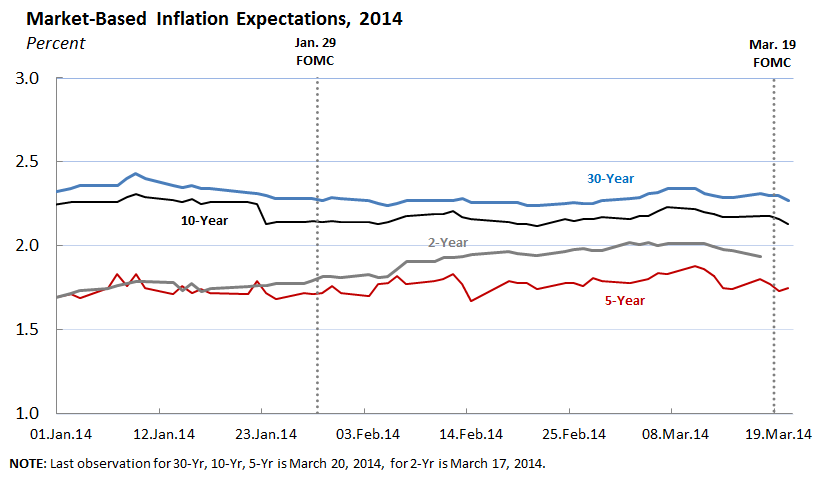 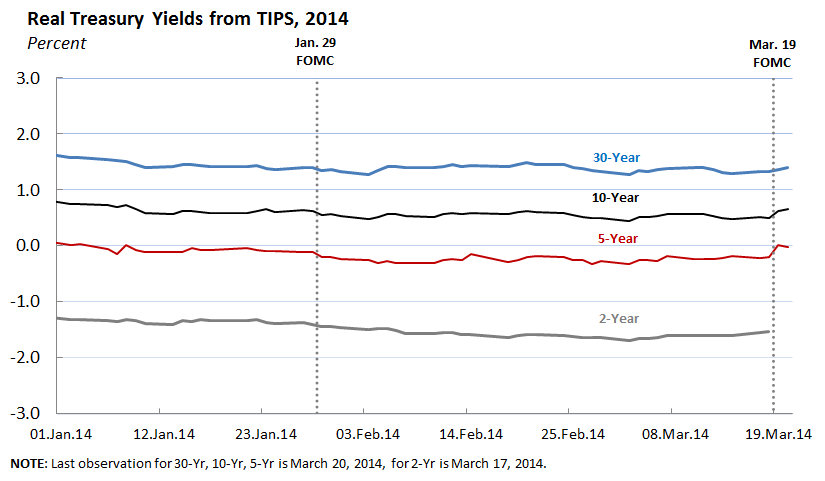 ﻿
Here is what the data looks like since 2007. Following some volatile behavior during the crisis, inflation expectations have roughly remained stable since 2009. 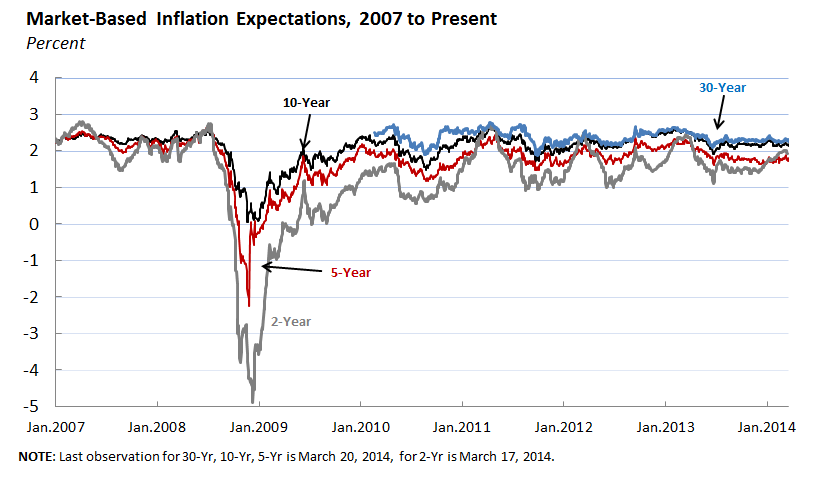 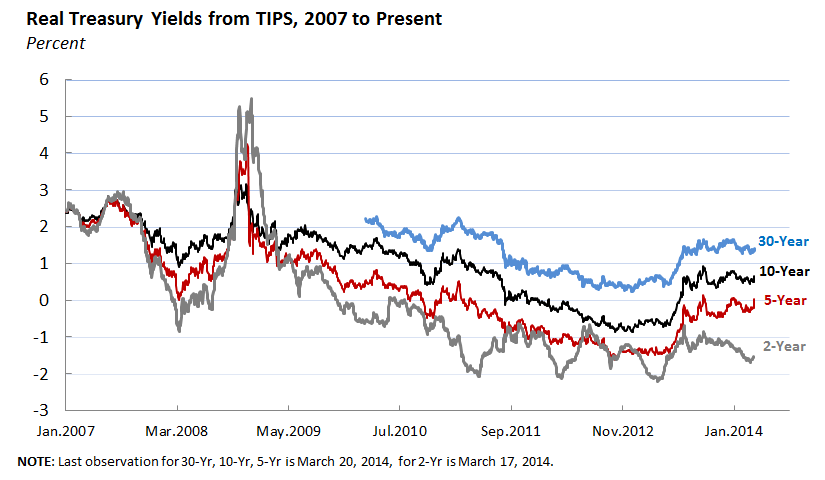 The interesting behavior since that time was fall yields and a flattening of the yield curve (nominal and real).  That downward trend appears to have reversed in mid 2013 (the taper tantrum), but has more or less remained stable since then (with the exception of the 2-year real, which has declined somewhat).

So while the real yield curve has steepened as of late, real yields are still well below where they were before the crisis (especially at the short end).
Posted by David Andolfatto at 1:14 PM 2 comments:

Employment Along the Canada-U.S. Border

I've written about differences in the Canadian and U.S. labor markets before; see here.  I see that Steve Williamson has recently chimed in as well with this: Why are Canadians Working so Much More than Americans?


A question that interested me is to what extent this cross-country difference is driven by regional considerations. That is, we know that most of the Canadian population lives and works near the U.S. border (the 49th parallel):

Now consider creating a new country consisting of U.S. border states: Washington, Montana, North Dakota, Minnesota, Wisconsin, Michigan, Ohio, New York, Vermont, New Hampshire and Maine (I exclude Alaska, Idaho, and Pennsylvania). If we were to combine these border states with Canada, the region of interest would look roughly like this (map is a little off, but you get the idea): 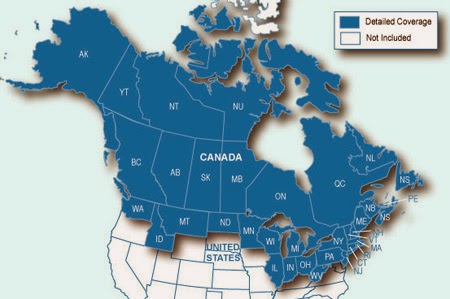 Here is a plot of the participation rate (employment plus unemployment as a ratio of the working age population): 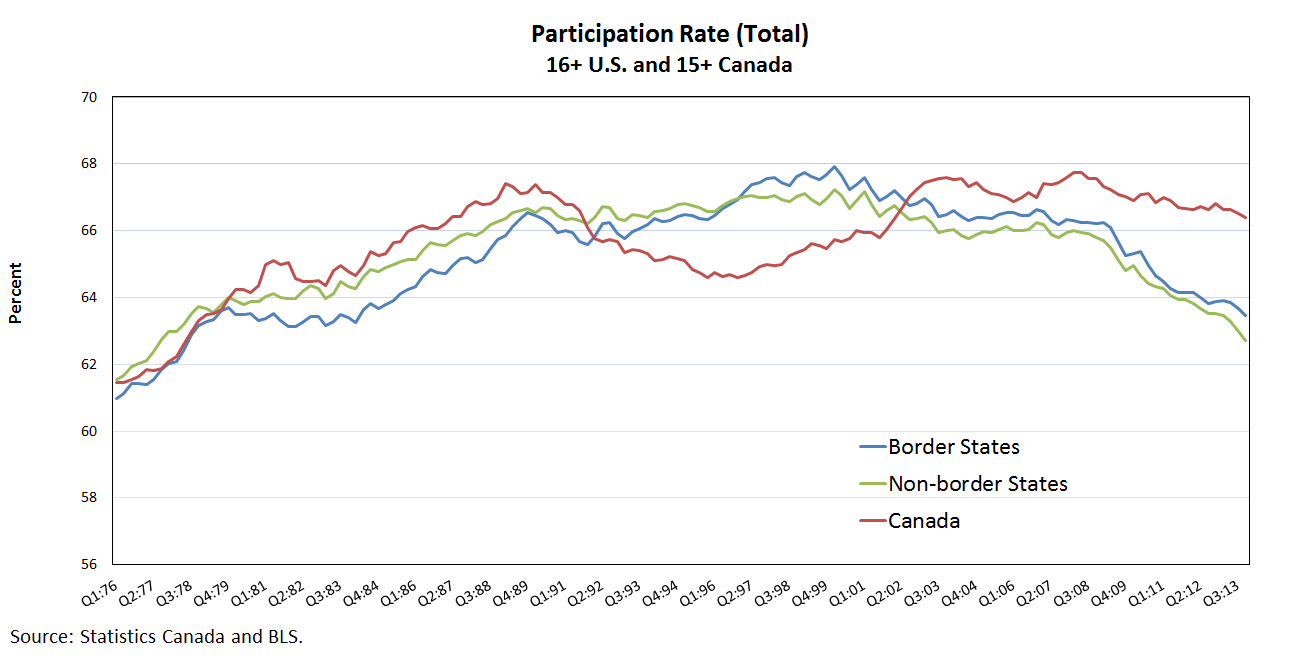 The U.S. border states look a lot more like the rest of the U.S. and not like Canada at all. Here is a plot of the employment rate (employment as a ratio of the working age population): 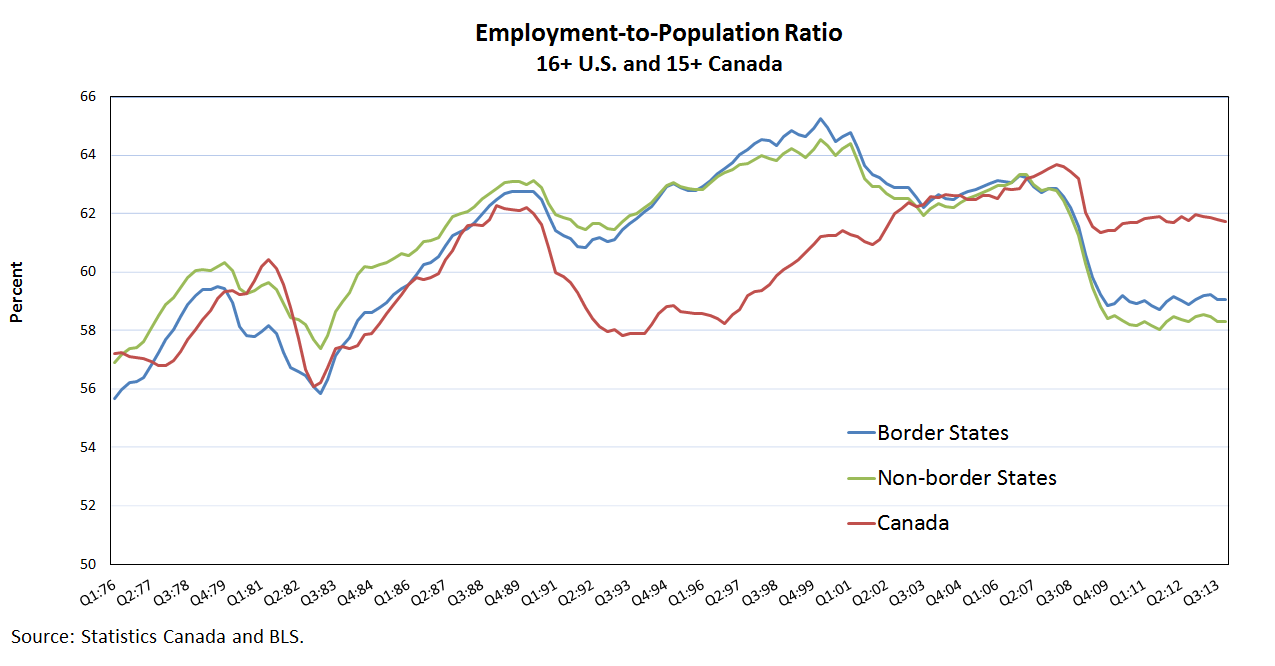 Once again, the border states look more like the U.S. in general, rather than Canada.

A preliminary conclusion is as follows: [1] If Canada-U.S. demographics are roughly similar; and [2] if U.S. border states are roughly similar to their Canadian counterparts in terms of sectoral composition; then the differences we observe between the two countries (in terms of labor market activity) are quite possibly driven by policy differences.

Exactly what sort of policy differences we are talking about here remains an open question.
Posted by David Andolfatto at 10:03 AM 12 comments: