Nick Rowe's post on upward-sloping IS curves motivates today's musings. I'm sorry, but what follows is a tad on the wonkish side. It's intended mainly to promote a conversation with Nick. (You can look in if you want, but I'm sure most of you have better things to do on Christmas Eve!).

Consider the Solow growth model. Output (the real GDP) is produced with capital (K) and labor (N) according to a neoclassical aggregate production function Y = F(K,N).

If capital and labor are exchanged on competitive markets, then factor prices are equated to their respective marginal products. Let (w,r) denote the real wage and the real rental rate, respectively. Let 0 < a < 1 denote capital's share of income. Then,

Now, consider an economy populated by two-period-lived overlapping generations. People enter the economy as youngsters, they become old, and then they exit the economy. The population of young people remains fixed at N over time t = 0,1,2,... The young are each endowed with one unit of labor, which they supply inelastically at the going wage. Hence, N represents labor supply. The young save all their income and consume only when they are old. Saving is used to finance investment, which adds to the future stock of productive capital. For simplicity, assume that capital depreciates fully after it is used in production. (None of the results below are sensitive to these simplifying assumptions).

Since a young person saves his entire wage, the capital stock (per worker) evolves over time as follows:

The transition dynamics are such that k(t) converges monotonically to a steady-state satisfying k* = (1 - a)f(k*). 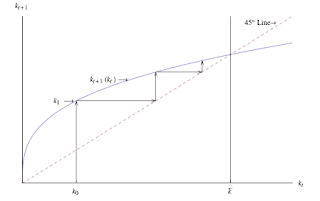 The IS curve in this model is defined as the locus of real interest rates and output consistent with goods-market-clearing. In the present context:

Now, let's consider one of Nick's experiments. Begin in a steady state. Nick considers an exogenous 10% increase in the capital stock. I'll do the opposite experiment and consider a 10% decline.

In a competitive economy, these price adjustments reflect the underlying fundamentals. The shock renders capital scarce. Less capital depresses the demand for labor, which is reflected in a lower real wage. Capital scarcity means the the return to rebuilding the capital stock is high. As saving flows into capital spending, the scarcity diminishes, and the real interest rate falls back to normal levels.

An implication of this policy is that the real wage will not fall. It's not that it cannot fall (it would fall if the real interest rate was permitted to rise). The real wage needs to fall, temporarily, to maintain full employment. But because it will not fall, then something else has to give. The level of employment must fall. Since k* = K/N is fixed and since K falls by 10%, it follows that N must fall by 10% as well. The central bank's refusal to permit the real interest rate to rise has led to an increase in unemployment (instead of a decrease in the real wage).

But things are even worse than they seem. While a shock that evaporates a part of the capital stock is eventually replenished when factor prices are market-determined, the same is not true when either the real interest rate or the real wage is fixed. In a post I wrote earlier (here), I considered a fixed real wage. But Nick's column made me realize that the same result holds if we fix the interest rate instead. A "low interest rate policy" in this case leads to "secular stagnation" (the level of output and employment is lower than it should be) as depicted in the following diagram: 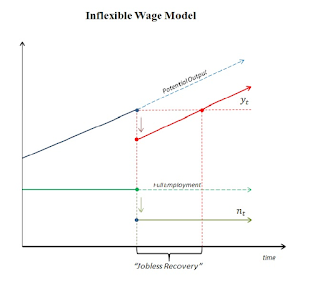 One way to read this result is that it vindicates Bill Gross' idea that artificially low interest rate policy constitutes a form of "financial repression" inhibiting the U.S. recovery (I criticize his views here.)

How seriously to take this result? I'm not so sure. A lot depends on the nature of the shock that is imagined to have afflicted the economy. In the experiment considered above, I just wiped out a fraction of the economy's capital stock--like a hurricane, or nuclear bomb. A more generous interpretation is that the shock stands in for an event that evaporates a fraction of the value of existing capital (not necessarily its physical quantity). People do not become any more pessimistic in the model as a result of the shock, which is why the economy transitions back to its initial steady-state when the price-system is left unencumbered. A depressed economic outlook, on the other hand, would serve to reduce real interest rates, not increase them as in the experiment above--and that sort of scenario would provide more justification for low-interest policy.

Posted by David Andolfatto at 9:51 AM