Fed chair Janet Yellen gave what I considered to be a good speech at this year's Jackson Hole conference (see here).  Not everyone seems impressed, however. The Fed has no credibility, it seems. For example, it keeps saying it's going to do things, like raise its policy interest rate, only to repeatedly back off. I mean, what the heck? Don't they even know what they're doing?

At some level, this degree of frustration is understandable. (I am less sympathetic, however, when it comes to informed journalists and market traders, who should know better.) Let me try to help ease your frustration.

The first thing to keep in mind is that monetary policy is not a precise science. Much remains to be discovered, especially since the environment (technology in particular) continues to evolve. Keep in mind that most central banks employ the services of research divisions. As Einstein is purported to have said: "If we knew what it was we were doing, it would not be called research, would it?"

That's not to say that monetary policy makers are completely clueless. Evidence. Theory. Discussion. Debate. Experience. Wisdom. They all have a role to play in the process of formulating monetary policy. There is considerable consensus along some dimensions (e.g., keeping inflation low and stable). There is outright disagreement along other dimensions. That's just the way it is. And it's likely to remain this way for the foreseeable future. But in the meantime, if you live in the U.S., try to take some solace in this:

Now, in terms of Yellen's Jackson Hole speech, what are people complaining about? Well, consider this WSJ article: Yellen Cries Wolf, with the subtitle: Fed chairwoman tries to convince market that a rate rise is coming but investors aren't listening. Of course, digging deeper into the article, the author clarifies that Yellen did not actually say that, only that she came "close" to saying it. Sigh.

The main issue here, I think, is what people expect in the way of Fed communication in terms of its economic outlook and its description/explanation of its policy rule. These are two conceptually distinct objects and are often confused.

My own personal view is that a central bank should make its policy rule clear, but that it should refrain from providing an economic outlook. So, for example, the Fed should want to make it clear that a sharp uptick in inflation would be met with a correspondingly sharp increase in its policy rate (assuming that this is an appropriate policy response). But what would be the use in having the Fed provide an outlook (a probability assessment) over future inflation? All that people need to know, really, is that the Fed is committed to keeping inflation in check. The credibility of this belief is ultimately based on reputation (see diagram above). As for forecasting the contingencies that would trigger this or that policy response, let the private forecasters do their job.

But some people want more from the Fed. They want the Fed to tell them how the economy is going to evolve in the foreseeable future (and in some cases, beyond). As if the Fed, or anyone for that matter, can actually know.

Now, if people generally appreciated the inherent difficulty in offering forecasts of this sort, I'd say that it would do no harm for a central bank to offer its economic outlook--a prognosis that would find its way in a portfolio of outlooks generated by other agencies. Market participants could then combine the information in these outlooks and, together with the Fed's clearly stated policy rule, make their own forecast of (say) the future path of short-term interest rates.

But perhaps I'm being naive. If a central bank was to just state its policy rule and refrain from offering its outlook, it would surely be criticized for not providing the market with enough "guidance." It is the demand for this "guidance" that compels central bankers to offer an economic outlook. Here is the outlook provided by JY (emphasized phrases my own):

Looking ahead, the FOMC expects moderate growth in real gross domestic product (GDP), additional strengthening in the labor market, and inflation rising to 2 percent over the next few years. Based on this economic outlook, the FOMC continues to anticipate that gradual increases in the federal funds rate will be appropriate over time to achieve and sustain employment and inflation near our statutory objectives. Indeed, in light of the continued solid performance of the labor market and our outlook for economic activity and inflation, I believe the case for an increase in the federal funds rate has strengthened in recent months. Of course, our decisions always depend on the degree to which incoming data continues to confirm the Committee's outlook.

And, as ever, the economic outlook is uncertain, and so monetary policy is not on a preset course. Our ability to predict how the federal funds rate will evolve over time is quite limited because monetary policy will need to respond to whatever disturbances may buffet the economy. In addition, the level of short-term interest rates consistent with the dual mandate varies over time in response to shifts in underlying economic conditions that are often evident only in hindsight. For these reasons, the range of reasonably likely outcomes for the federal funds rate is quite wide--a point illustrated by figure 1 in your handout...The reason for the wide range is that the economy is frequently buffeted by shocks and thus rarely evolves as predicted. 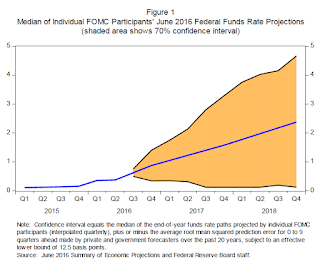 And so, there you have it. Evidently, the Fed plans to raise its policy rate soon. And if it doesn't, its credibility will be diminished. Or if it does raise rates even though conditions do not warrant it, its credibility will be again be diminished. Or, as the fan chart above demonstrates, the Fed evidently has no idea where interest rates will go. There's no winning this game. Go back and look at the first diagram again and give it a rest.

Posted by David Andolfatto at 11:31 AM 7 comments: