St. Louis Fed president James Bullard recently gave this speech on the U.S. macroeconomic outlook. The key themes of his talk were:
What does Bullard have in mind when he speaks of a low-growth "regime?" The usual way of interpreting development dynamics is that long-run growth is more or less stable and that deviations from this stable trend represent "cyclical" mean-reverting departures from trend. And if it's "cyclical," then it's temporary--we should be forecasting reversion to the mean in the near future--like the red forecasting lines in the picture below. 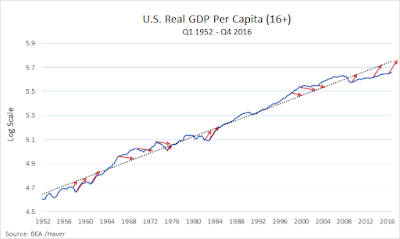 This view of the world can lead to a series of embarrassing forecast errors. Since the end of the Great Recession, for example, you would have forecast several recoveries, none of which have materialized.

But what if that's not the way growth happens? Suppose instead that growth occurs in decade-long spurts? Something like this. 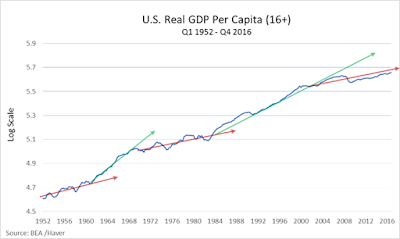 This view of the development process does not say we're presently stuck forever in a low-growth regime. It simply suggests that we have no idea when the economy will once again embark on a higher (or heaven-forbid, lower) growth regime and that in the meantime our best forecast is for continued low-growth for the foreseeable future.

A reader suggests plotting the annualized ten-year growth rate quarter-by-quarter. Here is what it looks like: 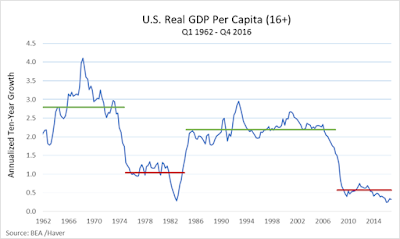 What determines a growth regime? Government policies may play a role. Or perhaps it's just the way economies grow. There is no God-given rule which says that productivity growth must at all times proceed in a straight line. Here is the San Francisco Fed's measure of total factor productivity: 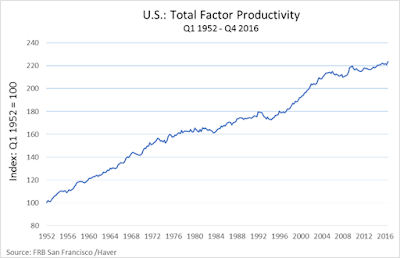 Note that the most recent productivity growth slowdown occurred well before the financial crisis.

The notion that the economy has converged to a low-growth regime is also evident in a variety of labor market measures. The prime-age unemployment rate is essentially back to its recent historical average, for example. 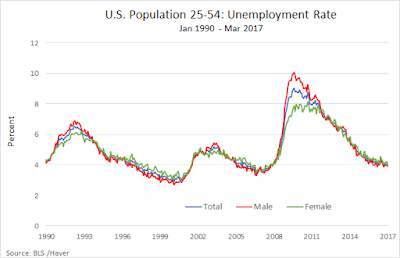 Measures of prime-age employment and participation still have a way to go, but arguably not very much. 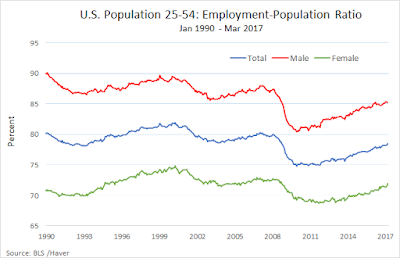 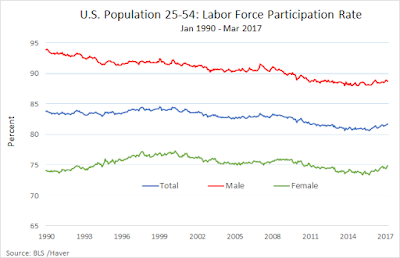 Next, what does he have in mind when he speaks of a "low-safe-real-interest-rate regime?" Bullard associates the "safe-real-interest-rate" with the expected real rate of return on (nominally) safe U.S. treasury debt (which he labels "r-dagger"). Operationally, he uses the one-year U.S. treasury yield minus a measure of year-over-year inflation (e.g., the Dallas trimmed-mean inflation). Below I plot "r-dagger" using year-over-year PCE inflation. I also plot an hypothetical "r-star" interest rate which (as suggested by theory) should track the expected growth rate of real per capita consumption expenditure. 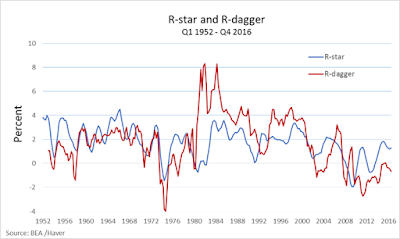 The (theoretical) real interest rate (as measured here by consumption growth)--the blue line--is on average high in high-growth regimes and low in low-growth regimes (the 1950s provide an exception). The r-dagger interest rate appears to move broadly with r-star (the early 1980s provide a dramatic exception).  The gap between r-star and r-dagger could be interpreted as a risk-premium (or a liquidity premium). The secular decline in r-dagger since the early 1980s reflects a number of factors. Inflation expectations fell and became anchored under Volcker. And since at least 2000, there's been an ever-expanding global demand for safe assets which are used extensively as collateral in shadow banking, as safe stores of wealth in emerging economies, and as objects that fulfill growing regulatory requirements (Dodd-Frank and Basel III). Evidently, Bullard does not believe that the appetite for these safe assets is likely to dissipate any time soon.
As for inflation, headline PCE inflation has only recently ticked back up close to the Fed's official 2% target. Nominal wage growth has also ticked up recently, but remains rather muted. The growth in real wages remains low--which is consistent with the U.S. economy operating in a low-growth regime. 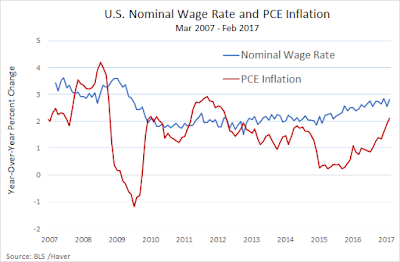 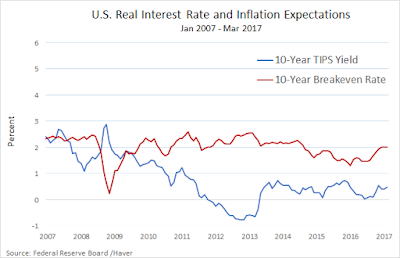 Given these observations, what's the rush to raise the policy rate?

At the same time, Bullard is suggesting that it might be a good time to think about reducing the size of the Fed's balance sheet. He notes that recent FOMC policy is putting upward pressure at the short end of the yield curve (via recent policy rate increases) at the same time putting downward pressure at the long end of the yield curve (via the long-term securities purchased in the LSAP). Bullard notes that "this type of twist operation does not appear to have theoretical basis." In fact, it's not clear what policy should aim for (if anything at all) in terms of influencing the slope of the yield curve.

Nevertheless, there are some good reasons to shrink the balance sheet (I provide a reason for keeping it large here). First, if there is indeed a shortage of safe assets, why is the Fed buying them up (replacing them with reserves that only depository institutions can access directly)? Ending the reinvestment program would release additional safe assets for the market, the effect of which would be to increase yields on safe assets (a good thing to the extent higher yields represent diminished liquidity premia.) Second, ending reinvestment (especially in MBS) would be a good move politically. One concern about ending reinvestment seems centered around the possibility of creating another "taper tantrum" event. But it seems unlikely that disruption in the bond market would occur if the policy change is communicated clearly and with plenty of advance notice.