Fiat money in theory and in Somalia

A classic question in the theory of money is how an intrinsically useless object like fiat money can possess exchange value. The modern theory of money has essentially settled on the answer first provided by Ostroy (1973). In a nutshell, circumstances may dictate that some objects are relative good for record-keeping purposes, quite apart from any other use they may have in consumption, production, or storage; see also, Kocherlakota (1998).

The basic idea is as follows. We know that monetary exchange is not necessary, even in economies where mutually beneficial bilateral barter exchanges do not exist (what economists clumsily call a lack of double coincidence of wants). This is not simply a theoretical statement; we know of (and indeed most of us belong to) small economies (networks of families and friends) that operate according to "gift giving" principles. We are willing to make individual sacrifices without monetary compensation, hoping that they will be noticed, remembered, and most importantly, reciprocated at some point in the future.

Gift-giving societies seem to work well enough in small groups. This is probably because it is relatively easy to keep track of (remember) individual contributions and rewards in small groups. This "societal memory" seems to break down in large groups. Evidently, there are limitations to how much information can be recorded securely in the collective minds of people who make up society. When this is the case, some substitute form of memory could be useful. This is where money comes in.

Imagine that there is an object that is durable, divisible, portable, hard to counterfeit, and in limited supply. A lot of commodities fit this description, including gold, silver, and salt (think of what "salary" means). Historically, privately-issued paper in the form of asset-backed securities (like the banknotes of antebellum America) have also fit this description. In larger economies, objects like these begin to circulate as a means of payment. They become money.

Let me explain the basic idea. In the past, I may have made a contribution to society for "free." Well, not exactly for free; but because I knew that my contribution would be noticed and reciprocated. But as my community grows, it becomes increasingly difficult for people to keep track of each other's contributions. Well, if that's the case, then it might make sense to record my gift in some other manner. Accepting a monetary object is one way to do this. The money in my possession constitutes information about my past contributions to society. In the language of Narayana Kocherlakota (currently president of the Minneapolis Fed), money is memory.

Because commodities (including the physical capital that may back paper money) have uses in consumption and production, an implication of this is that society must bear a cost if such goods are tied up in facilitating exchanges. Their value in exchange generally means that they are priced above their "fundamental" value; that is, they possess a "liquidity premium." (This is related to what Caballero calls an asset shortage.)

According to this view, the market value of fiat money consists exclusively of a liquidity premium. The asset has no intrinsic value, and yet it has a positive price. Fiat money is a "bubble" asset -- but this is a bubble that plays a useful social role (it economizes on commodities that have uses other than record-keeping).

Prior to Ostroy's work, the answer to the question of how fiat money can possess exchange value was that its value is somehow supported by government decree (the original meaning of the word "fiat"). In particular, the government could introduce paper and insist that taxes be paid in government paper.

A recent paper by William Luther and Lawrence White (Positively Valued Fiat Money after the Sovereign Disappears: The Case of Somalia) casts some doubt on the strength of the mechanism highlighted by this older view.

Evidently, it is the case that the Somali shilling continues to circulate in that country long after the government that issued that paper collapsed in 1991. Here is a quote from the paper:


One of the most astounding phenomena of the domestic market is the continued circulation of the old Somali bank notes. The Somali currency has had no central bank to back it up since the bank was destroyed and looted in 1991. Nonetheless,the currency has maintained value, and has floated against other foreign currencies that are traded freely in local markets.

One reason the shilling continues to maintain its value is no doubt related to the fact that it's supply can be trusted to remain relatively constant over time. In fact, it's supply may be contracting over time as notes wear out (I have heard stories of where old notes are laminated to make them more durable, but am unable to confirm this.) On the other hand, there is some evidence of counterfeiting; e.g.,


Perhaps the most convincing evidence that the Somali shilling held a positive value in the absence of sovereign support, however, is that individuals found it profitable to counterfeit these notes. Mohammed Farah Aideed ordered roughly 165 billion Somali shillings in 1996 from the British American Banknote Company based in Ottawa, Canada. Another 60 billion Somali shillings were imported by Mogadishu businessmen in 2001. In total, an estimated 481 billion in unofficial Somali shilling notes have been printed since 1991.

This counterfeiting phenomenon, however, does not appear to be excessive; and, indeed, it probably plays some positive role in keeping the supply of shillings relatively stable.
Posted by David Andolfatto at 7:51 AM 48 comments: 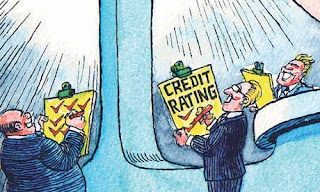 Rebel Economist (see comments below) directs me to this interesting link: Is Blaming AAA Investors Wallstreet Serving PR?
Posted by David Andolfatto at 11:18 AM 14 comments: