Lowflation refers to an inflation rate persistently below an official target rate. Here's what the picture looks like for several countries as of January 2014 (source: Contessi): 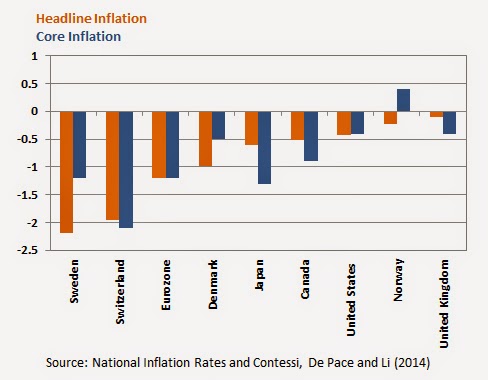 Here's what the time-series looks like for the United States (source: Duy): 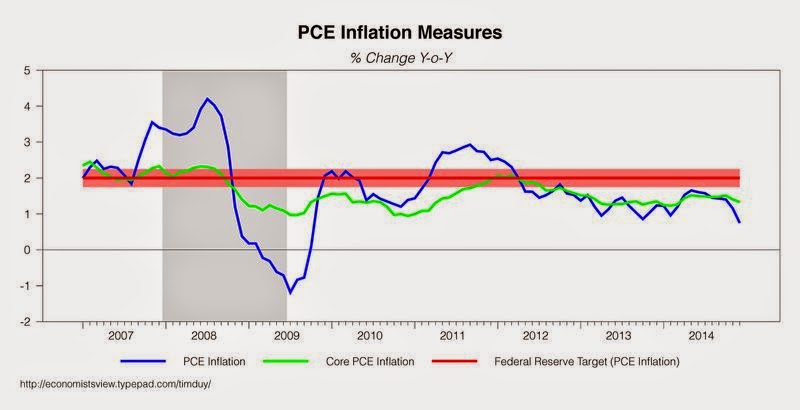 The apparent inability of a central bank to raise inflation seems truly remarkable for those of who lived through the great "peace-time" inflation (see Romer and DeLong). What's going on here? Isn't high inflation supposed to be easy to get?  Didn't Zimbabwe give us a modern day lesson in creating inflation? Didn't former Fed Chair Paul Volker demonstrate how a sufficiently determined central bank can lower inflation? If so, then why does it appear so difficult to accomplish the reverse?

In this post I want to think out loud about how one might interpret this strange state of affairs. There are two broad themes running through my head these days. The first, and more important theme, is the old Sargent and Wallace idea of potential conflicts arising between independent monetary and fiscal authorities that are linked through a consolidated government budget constraint.

The second, and less important theme, revolves around the concept of a liquidity trap. Think of a liquidity trap as a situation where investors view central bank money and treasury debt as perfect substitutes. Such a condition likely never holds exactly in reality, but that's neither here nor there. Empirical relevance is possible even if liquidity trap conditions hold approximately. In any case, if money and bonds are close to perfect substitutes, then the composition of total government debt (between money and bonds) has little economic significance (in the same way that the composition of the money supply between $5 and $10 bills does not matter).

Let's start with the monetary-fiscal policy game. For those who are interested in a formal description of the model I have in mind, LOOK HERE. The fiscal authority is assumed to choose the time-path for government debt. The monetary authority takes the time-path of debt as given and simply chooses the composition of the debt between low-interest-money and high-interest-bonds. That is, the monetary authority can choose the money-to-debt ratio, but not the total amount of debt (money plus bonds).

That is, by the way, one interpretation of the 1981-82 recession. If it is correct, it's rather unfortunate because the theory suggests that it could have been avoided had the conflict been resolved sooner rather than later. [Sargent (1986) has a nice discussion here of Wallace's "game of chicken" between decentralized branches of a government, with application toward interpreting the Reagan deficits.]

In any case, let's move forward to today where we see the opposite situation unfolding: inflation rates persistently below the central bank's target rate. What is the proximate cause of this? The notion of a diminished growth rate in the supply of debt is not tenable. I'm inclined to view countries like the U.S. as having an relatively stable fiscal anchor. Treasury-issuance in the U.S. did rise sharply during the financial crisis, but the growth rate has subsided to more sustainable levels. Here is the growth rate of nominal U.S. debt held by the public: 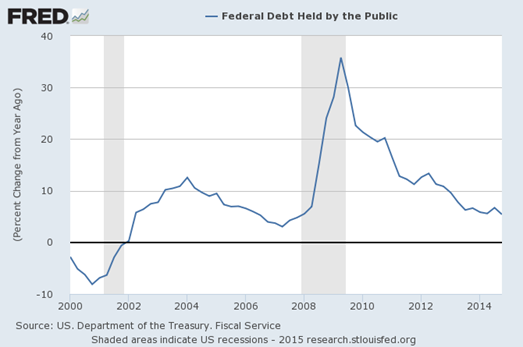 And here is the debt-GDP ratio for the U.S. 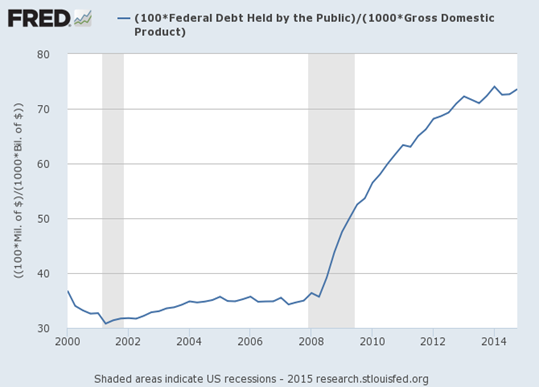 Well then, if the supply of debt is not responsible for lowering inflation, what is? The demand side, of course. While one can't provide direct evidence pertaining to the demand for debt, we can make reasonable inferences based on its price behavior. Judging by the collapse of U.S. treasury yields since the crisis (see next diagram), I'd say that one can safely infer a robust demand for the product. (I would be curious to know what other conclusion one could come to, especially in light of how much the supply of U.S. treasury debt has increased.) 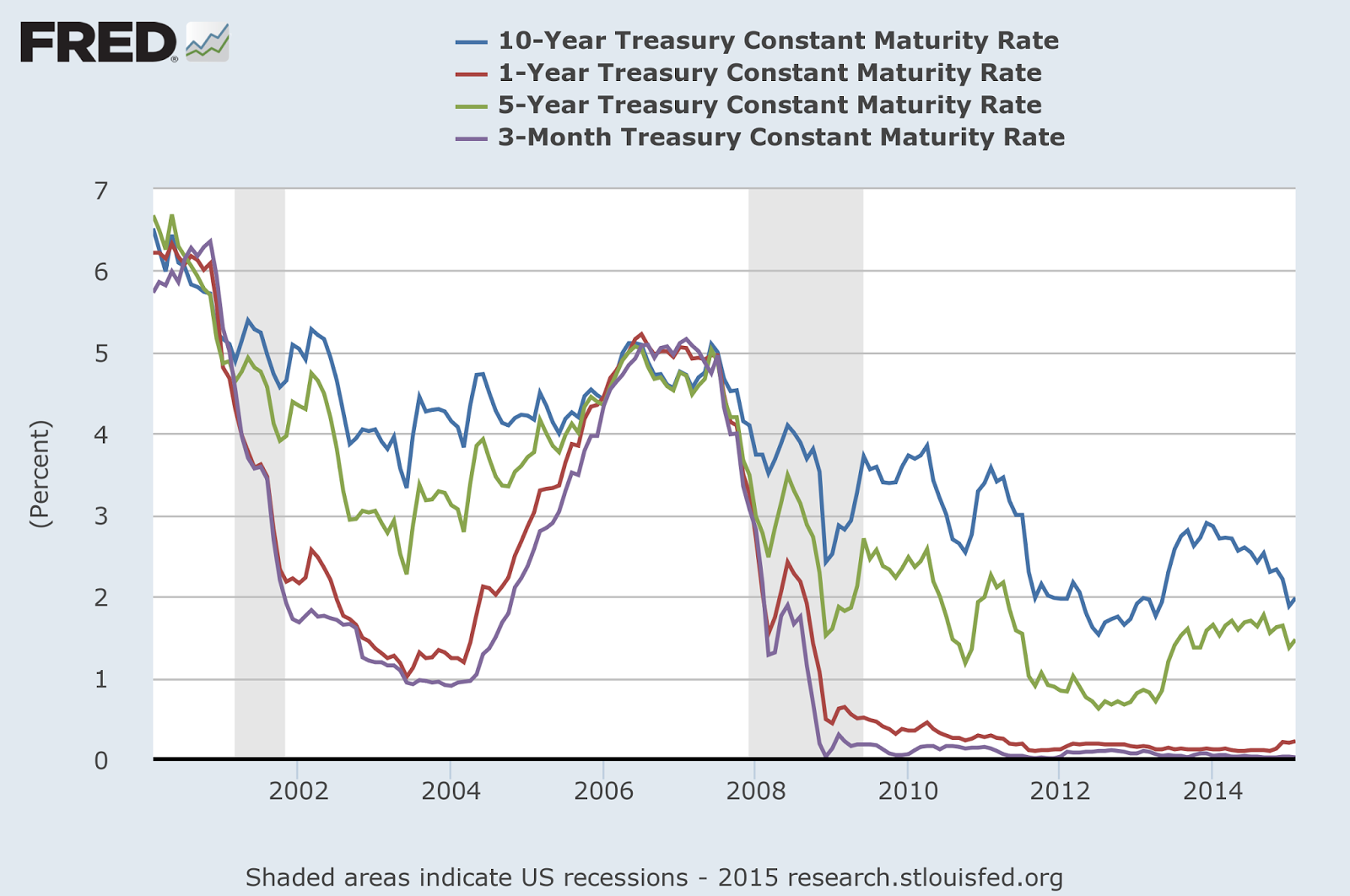 Alright, so let's imagine, not unreasonably I think, that there's been an uptick in the worldwide demand for high-grade debt. On the first instance, the effect of this growing appetite is to pull yields down. On the second instance, with yields bounded below by zero, the effect is deflationary (a lower price-level is the market's mechanism for increasing the real supply of nominal debt when it is in short supply).

Most central bankers are likely hoping that this demand-driven disinflationary pressure is transitory. But suppose it is not and suppose the central bank wants to act to raise inflation back to target. Again, one way to do this is to ask the fiscal authority to consider raising its nominal deficits (insert laughter here). Alright, we weren't seriously thinking that was going to work, did we?

So our steadfast central bank embarks on the reverse-Volker path, steadily increasing the money-to-debt ratio over time. With larger and larger fractions of the public debt being monetized, real and nominal interest rates decline (I'm assuming that the inflation peg is being held). Will the fiscal authority "blink" this time around in face of the central bank's resolve?

Alright then, well suppose the central bank nevertheless carries on with its program of monetary stimulus. What is the end game (assuming that the elevated growth rate in the demand for government debt continues unabated)?

The answer to this question depends on what limits govern the growth and size of a central bank's balance sheet. Let impose a relatively weak condition.

[A1] The central bank cannot forever monetize debt at a rate faster than it is being issued.

Assumption [A1] is relatively weak because it does permit a central bank to grow the money-to-debt ratio temporarily. It just can't do so forever.

If [A1] holds, then the endgame is clear. Eventually the growth in the money-to-debt ratio must cease. At this point, inflation must decline back to the rate implied by the fiscal anchor. The cards are stacked against the central bank in this game. Sumimasen, Nippon Ginko.

So where does the liquidity trap relate to this discussion? I don't think it's necessary for understanding the logic above, but it does add a bit of contemporary color. In a liquidity trap, even very rapid increases in the money-to-debt ratio will be inconsequential, apart from leading to a correspondingly rapid increase in the level of excess reserves in the banking system. The BOJ is presently trying very hard to prove this prediction incorrect, but so far, with mixed success. And already, cracks are beginning to appear in the resolve of some top Japanese policy advisers.

The seminal modern treatment of the liquidity trap was presented in Krugman (1998).  In that piece, he states (pg. 139):


The traditional view that monetary policy is ineffective in a liquidity trap, and that fiscal expansion is the only way out, must therefore be qualified: monetary policy will in fact be effective if the central bank can credibly promise to be irresponsible, to seek a higher future price level.

I think that this statement is true but that the conditioning factor "if the central bank can credibly promise" does not presently apply to central banks of countries with high-grade sovereign debt. The rapidly growing appetite for high-grade debt depresses yields and inflation. To overcome these deflationary pressures, central banks must threaten to expand their balance sheets far beyond what anyone can sensibly believe is possible. In such circumstances, it really can be more difficult to raise the inflation rate than lower it. Such is the "price" of responsibility.


******************
PS. Lest there be any misunderstanding, this post is not about why raising inflation back to a central bank's target is inherently a good thing for the economy. I appeal to no theory here of what constitutes an optimal inflation target. The purpose is simply to explain why in some circumstances it might be harder to raise inflation rather than to lower it.
Posted by David Andolfatto at 8:08 AM 24 comments: