Almost four years ago, I asked whether the U.S. was in for a labor market slump similar to the slump experience in Canada during the 1990's. Evidently, the answer turned out to be yes.

Let's begin by looking at the employment ratio for prime-age males: 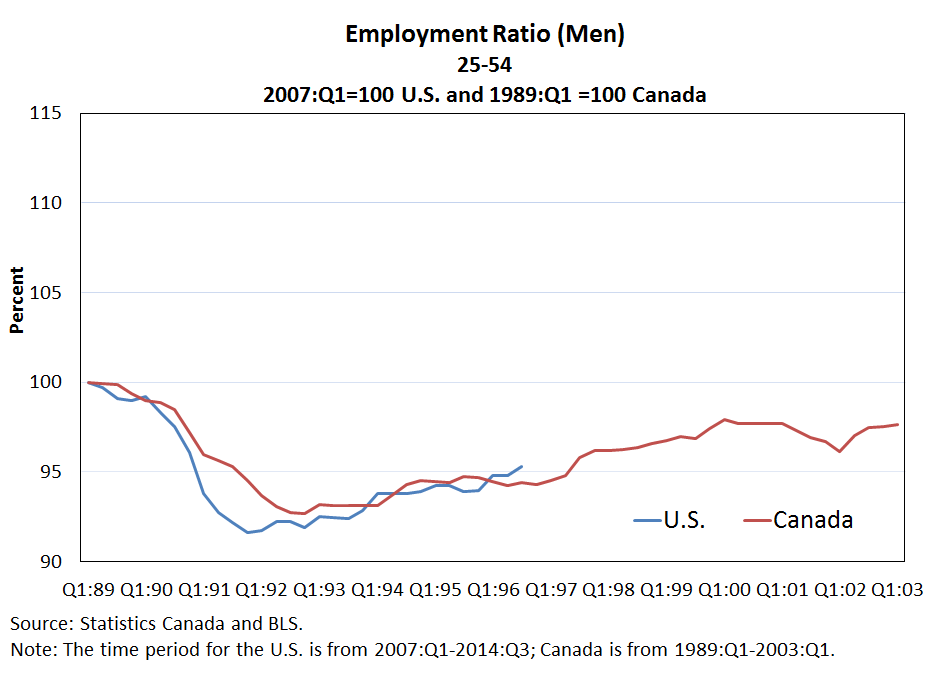 As you can see, the sharp drop and subsequent recovery dynamic for prime-age males is remarkably similar across these two countries and time periods. (The initial E-P ratio was about 87% for both countries; see here).

Here is what their labor force participation rates look like: 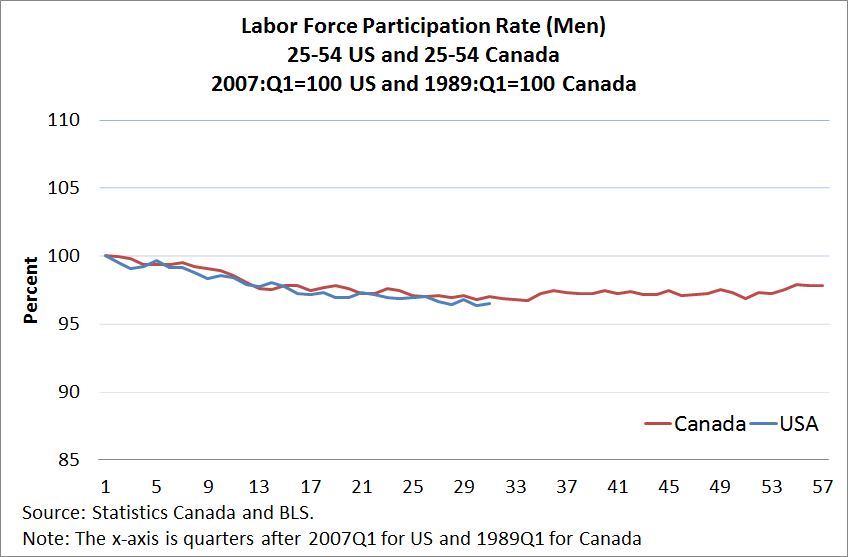 Again, the recovery dynamic looks almost identical (The initial part rate for Canada was 93%, for the US about 91%; see here). 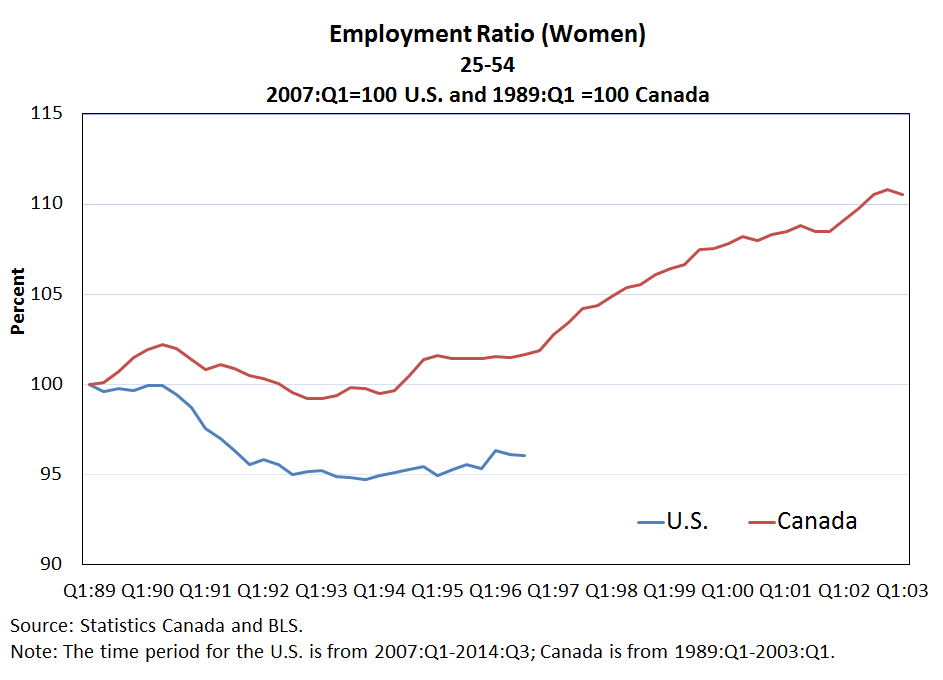 These dynamics look quite a bit different. The main effect of the recession in Canada was to slow down the growth rate in the employment ratio. In the U.S., the effect has been to reduce the employment ratio, with only a very weak sign of recovering in the past year.

Here is what the labor force participation rate dynamics look like: 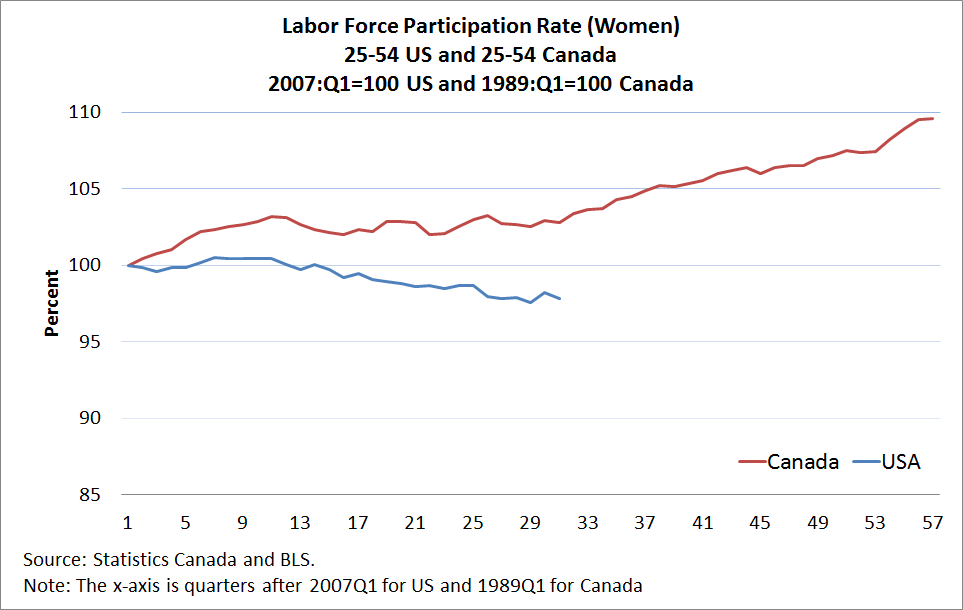 A colleague of mine suggested that state-level layoffs in education and government may explain a good part of the lackluster recovery dynamic for U.S. females. This is certainly worth looking into. However, if we take a look at the following diagram, we see that the discrepancy appears to have happened much earlier -- around 1997, in fact. 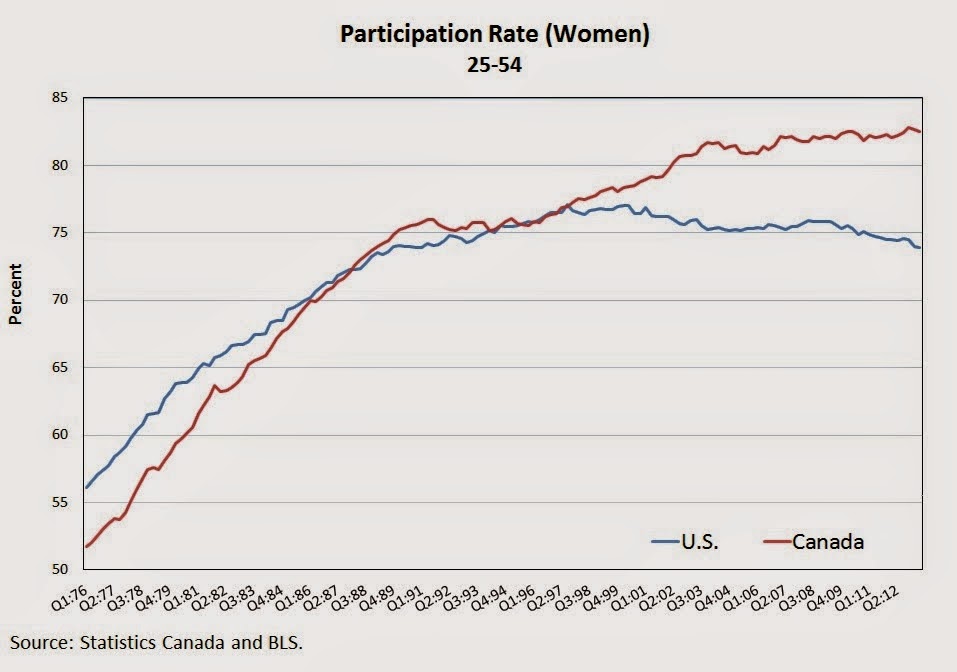 It seems unlikely to me that the divergence between Canadian and American prime-age females is driven by cyclical considerations (although, a small part of the recent gap may be). Work incentives are likely to have changed, although what these changes were, I do not yet know. In any case, I doubt that monetary policy is a tool that can be used to close this gap. I can think of plenty fiscal interventions that might help, however.

We analyze the introduction of highly subsidized, universally accessible child care in Quebec, addressing the impact on child care utilization, maternal labor supply, and family well-being. We find strong evidence of a shift into new child care use, although some crowding out of existing arrangements is evident. Maternal labor supply increases significantly. Finally, the evidence suggests that children are worse off by measures ranging from aggression to motor and social skills to illness. We also uncover evidence that the new child care program led to more hostile, less consistent parenting, worse parental health, and lower-quality parental relationships.