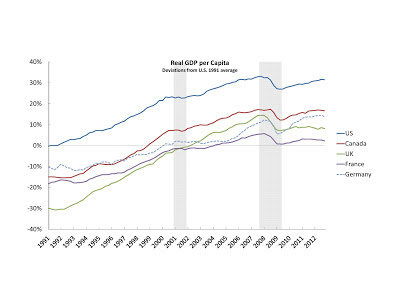 Moreover, out of this set of countries, only the U.K. has experienced a significant rise in inflation (and hence, NGDP). It's not exactly clear from this data how this "looser" monetary policy has contributed to a more rapid recovery dynamic (although, as usual, we have to be careful because many other things are happening, especially on the fiscal front).
Posted by David Andolfatto at 11:33 AM 20 comments: 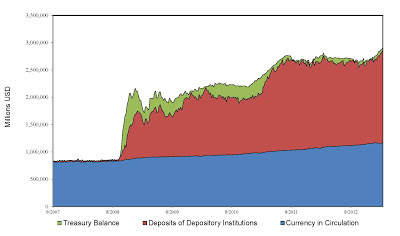 What's interesting here is that prior to the crisis, almost all the Fed's liabilities were in the form of (zero-interest) cash -- that is, currency in circulation (the blue area). No one knows for sure, but probably over half of this cash is circulating outside the U.S.

At the time of the financial crisis, the balance sheet doubled over a very short period of time, and has continued to grow since then. What's interesting here is that subsequent to the crisis, most of the growing liabilities are in the form of interest-bearing reserves (held by depository institutions with accounts at the Fed).

Now, three trillion dollars sounds like a heck of a lot of liabilities. There is no danger of bankruptcy, however. That's because Fed liabilities are not debt; or, if they are (as in the case of reserves), they are made redeemable in cash, which the Fed can print at any time. Fed liabilities are more like equity shares, than debt. That is, there is a risk of dilution (inflation), but no risk of bankruptcy. 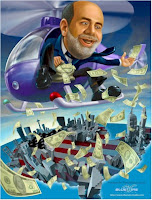 Next question: what did the Fed do with all this money it "printed" up (out of thin air, I might add)? Many people are likely to conjure up an image of "Helicopter Ben."

Alas, that's not quite how it works (even if it does work this way in some other countries, like the recent experience in Zimbabwe). You see, while the Fed is "pumping money into the economy," it is simultaneously sucking some other group of assets out of the economy.

To put things in a slightly different way, the Fed is acting much like, um...well, much like a bank. That is, the Fed finances acquisitions of less liquid assets with more liquid liabilities. The Fed's liquid liabilities look a lot like super short duration Treasuries. What do the assets look like? Take a look here: 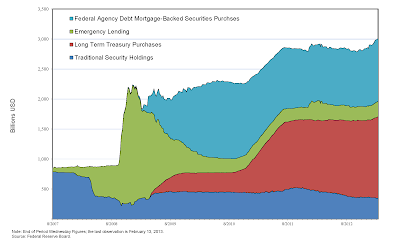 Most of the assets consist of interest-bearing securities, primarily U.S. government debt and agency MBS. In 2012, this portfolio yielded over 3%. In 2012, the Fed remitted $89B to the Treasury (historically, remittances have been around $25B per year). Not a bad return, for a year of "helicopter drops."

In the meantime, inflation appears to be fairly well centered around the Fed's 2% inflation target (recent data is coming in below target): 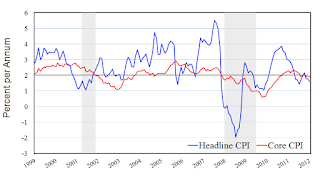 TIPS based measures of inflation expectations appear to be fairly well centered around 2% as well (recent data appears to be rising a bit away from target): 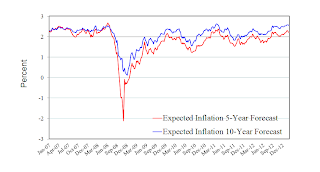 While inflation and inflation expectations appear to be muted for the time-being, a number of economists and Fed officials still worry about the various risks associated with the Fed's large and growing balance sheet. The most obvious worry is the risk of inflation. The extent to which one worries about inflation depends a lot on one's theory of inflation, which I will explain below.

In the extreme version of this view (Woodford's cashless economy), Fed liabilities serve only as a unit of account; and the private sector manufactures the "money" it needs. The Fed determines (influences) the nominal interest rate, which influences the aggregate demand (AD) for goods and services. Inflation is determined in part by the pricing decisions of firms. When AD is strong, prices rise more rapidly; and conversely when AD is weak. Inflation is also determined in part by the Fed's policy function (Taylor rule), which stipulates a long-term inflation target (serving as the nominal anchor) together with the promise to alter the interest rate (hence AD) in response to undesirable movements in inflation away from target.

This world view likely explains the statements made by the more dovish members of the FOMC. Inflation is low because aggregate demand is weak. We need to keep interest rates low. Additional QE by the Fed is mostly innocuous--except possibly for political reasons.  What do I mean by this? Let me explain.

Federal Reserve Board economist Seth Carpenter (and his coauthors) have recently distributed an interesting working paper that offers a methodology for making projections about the way the Fed's balance sheet is to evolve over time, see: The Federal Reserve's Balance Sheet: A Primer and Projections. In some of their projections, the Fed actually incurs an operating loss and remittances to the U.S. Treasury cease for a while. The economic consequences of this are innocuous if you're coming at things from a strict New Keynesian perspective. But the optics can be made to look bad, something that politicians hostile to the Fed are likely to exploit. Let me consider a simple example.

The Fed currently pays 1/4% on excess reserves, which are presently close to $2T. In one year's time, and under currently policy, reserves will be closer to $3T. The annual interest expense associated with these reserve liabilities is presented in the following table, for various interest rates (IOR):

Now, perhaps this is unlikely, but it is certainly not outside the realm of possibility: Imagine that inflation and inflation expectations begin to rise sharply at the end of 2013. The Fed's policy response is to jack up it's policy rate (IOR) sharply, say, to 3%.  If reserves remain close to $3T, that's about $90B in interest payments to banks and hence, $90B less in remittances to the Treasury.

From an economic (a consolidated Fed and Treasury balance sheet) perspective, interest-bearing reserves look a lot like interest-bearing Treasuries. So whether the Fed or the Treasury services this debt makes little difference to the American taxpayer. Naturally, this is not the way things will be portrayed in the political arena.

According to this view, there are financial market imperfections (limited commitment, asymmetric information, etc.) that allow Fed and Treasury liabilities to be valued for their liquidity/collateral properties. Inflation, in the long-run at least, is determined by the supply and demand for currency (a special type of Fed liability).

In normal times, currency is dominated in rate of return, so their is a well-defined demand for the stuff. As well, in normal times, reserves are dominated in rate of return, so Fed liabilities are mostly in the form of currency (see first diagram above, prior to 2008). A well-defined demand for currency plus Fed control over the supply of currency means that the Fed can control inflation.

In abnormal times, however, reserves and Treasuries earn (roughly) the same rate of return. In this case, the Fed only controls the total supply of its liabilities--the composition of these liabilities between currency and reserves is determined by banks. Reserves are like a demand deposit liability--convertible into currency on demand. The Fed can influence bank redemption policies by manipulating IOER--if it has this tool available. Note that the Fed has only had this tool available since 2008. (And in light of the political risks outlined above, one could easily imagine Congress taking this tool away.)

In many of our models, we assume passive support from the Treasury to support whatever needs to be done to keep inflation in check. But how realistic is this? What if that support does not materialize? And moreover, suppose that the Fed is no longer permitted to use IOR as a policy tool? What if inflation and inflation expectations start to rise? What then?

In this case, the only way the Fed can "suck out" excess liquidity is via asset sales. In a sense, the value of the Fed's assets represents the extent to which the Fed can credibly commit to withdraw cash from circulation (the Fed has no ability to tax). But if inflation expectations rise, so will longer term interest rates. The Fed's assets will decline in value. And with the decline in value, the ability to purchase cash.

What sort of capital losses are we talking here? Obviously, it depends. The average maturity of the Fed's asset portfolio is around 10 years (up significantly from historical norms, thanks to Operation Twist, etc.). The following formula provides a rough approximation of exposure to interest rate risk:

So, to take a bad (but not worse case) scenario, suppose interest rates rise by 5 ppt (e.g., China decides to unload its holdings of U.S. Treasuries?). We are talking about a 50% (somewhat less) loss on the Fed's $3T portfolio. The remaining $1.5T in asset value would not be enough to suck out the current $2T in reserves. There would be $0.5T in reserves remaining--representing $0.5T in potential new currency (a 50% increase over the current supply of $1T).

No one knows for sure which of the two theories of inflation above is the better approximation for our current reality. Central bankers are charged with the task of evaluating the risk of their policies under different theoretical scenarios. If the monetarist view is correct, then continued expansion of the Fed's balance sheet exposes the economy to ever higher inflation risk. Of course, this is not to say that the risk is not worth taking. Policymakers just need to be aware of the risk and make provisions for it.

It is interesting to note, however, that independent of one's theory of inflation, the large and growing balance sheet may expose the Fed to a certain type of political risk. If tightening needs to happen in the future, the Fed will have to raise interest rates (IOR) and/or sell off its assets. IOR may be made to look like Fed Reserve (instead of Treasury) transfers to the banking sector, at taxpayer expense. Capital losses on asset sales would similarly reduce remittances to the Treasury. It's not going to look very pretty.