There's been a lot of talk lately about the flattening of the yield curve, what's causing it, and what it portends. In this post, I describe a simple "neoclassical" theory of the yield curve and ask to what extent it serves as a useful guide for our thinking on the matter. 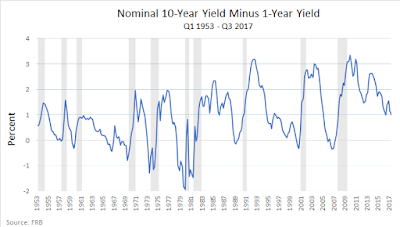 The graph above plots the nominal yield curve. Economists frequently stress the importance of real (inflation adjusted) interest rates, which I will denote R. Because there is a ten-year Treasury-Inflation-Protected Securities (TIPS), we have a market-based measure of R(10). Let me compute     R(1) = I(1) - P(1), where P(1) denotes expected year-over-year inflation. Let me use the year-over-year change in core PCE inflation as my measure of P(1). That is, I am assuming that over the short-run, the market expectation of inflation is roughly last year's core (trend) inflation rate. Since TIPS data is only available since 2003, here is what we get: 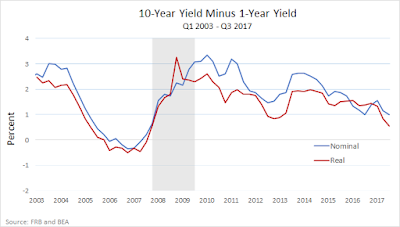 The nominal and real yield curve share the same broad pattern. This is consistent with what we would expect if inflation expectations are stable. Note the slight bump up in the nominal yield curve following the November 2016 presidential election. Since then, both yield curves have been flattening--the real yield curve more so than the nominal curve. Does this mean we are heading for recession, or at least a growth slowdown? And if so, why? To answer this latter question, we need some theory. [Warning: what follows in blue is wonkish. If you are not a wonk, skip the blue section--some intuition follows.]

Consider this simple model economy. There are three periods (the minimum number I need to generate a yield curve). The economy is closed and is populated by individuals with identical preferences for consumption over time, c1, c2, c3. That is, people care about their material living standards over the course of their planning horizon. If people like to smooth their consumption over time, then the following representation of preferences serves to capture this idea W = u(c1) + u(c2) + u(c3), where u(.) is an increasing concave function. For simplicity, let u(.) = log(.). To make things even simpler than they need to be, assume an endowment economy so that the real GDP is expected to evolve according to y1, y2, y3. Finally, let Rij denote the real rate of interest between periods i and j. Then the equilibrium real interest rates are given by:
R12 = y2/y1
R23 = y3/y2
R13 = square root of (y3/y1)

Let me now explain in words what this model implies. First, the model predicts that real interest rates are proportional to expected economic growth. The economic intuition for this is that if incomes are expected to grow more rapidly, then in an attempt to smooth consumption (that is, bring future income back to the present) people will want to save less (or borrow more). The decline in desired saving (increase in desired borrowing) results in upward pressure on the interest rate until the bond market clears.

The slope of the yield curve in this model economy is given by S = R13 - R12. This is roughly the ratio of expected long-term growth (y3/y1) relative to expected short-term growth (y2/y1). Thus, a positively-sloped yield curve in this economy is symptomatic of a bullish economic outlook (growth is expected to accelerate). Conversely, a negatively-sloped yield curve is symptomatic of a bearish outlook (growth is expected to decelerate). The interpretation offered here of the flattening yield curve is that expectations are turning increasingly bearish--people are cutting back on planned consumption, increasing their desired saving (reducing planned borrowing)--all of which serves to put downward pressure on long rates.

As with all simple theories, it would be wrong to view this as "the" explanation for the yield curve. At best what the theory does is highlight certain forces that may be at work in the real economy. Whether the forces identified are quantitatively important is an empirical question. Nevertheless, I think the model offers a good place to organize our thinking on the matter.

A conventional view among economists is that the Fed has little or no control over long real interest rates. If long-rates are declining because of an increasingly bearish sentiment, then there's little the Fed can do about it. But what justifies the recent policy of raising the short-term rate? The model above suggests that the Fed is simply responding to market forces--the market "wants" higher short rates and the Fed is simply accommodating this want. I'm not sure this is the best way to think about what's happening. One thing missing from this simple model that may be important to consider is the liquidity premium on short-term government debt. Is the current Fed policy affecting this liquidity premium and, if so, what effect is it having on real economic activity? I'll try to address these and other questions in future posts.

In reality, the yield curve is usually positively sloped. It seems unlikely that the explanation for this is that investors are perennially bullish (in the sense of expecting accelerated growth). There are other factors that may impinge on bond yields at different horizons and hence on the slope of the yield curve. One such factor is the liquidity premium attached to short-maturity debt. If the short bond in the model above is valued for its liquidity (and if liquidity is "scarce" in a well-defined sense that I don't have room to explain here), then the market yield of the short bond will be lower than what is dictated by "fundamentals." In other words, short bonds will seem very expensive. If this is the case, then the yield curve may be positively sloped even if the growth outlook is stable (instead of bullish).

The interpretation in this case is that raising the policy rate is reducing "financial repression," which is likely to offer modest stimulus. This policy action in itself will have no measurable impact on inflation and the associated flattening of the yield curve is what we would expect if growth prospects remain stable (the flattening yield curve does not necessarily portend recession).

Posted by David Andolfatto at 9:26 AM 2 comments: