Does the Fed have a credibility problem? 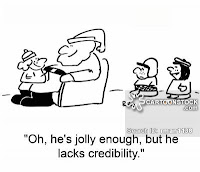 Former Minneapolis Fed president Narayana Kocherlakota thinks that the Fed's recent communication strategy has resulted in an unforced "credibility dilemma." (The Fed's Credibility Dilemma.) What is the nature of this dilemma?

The message coming out of the Fed recently is one of "gradual normalization." Normalization refers to returning to the state of affairs that prevailed prior to 2008, when the Fed's balance sheet was much smaller and the policy interest rate (short term nominal interest rate) was much higher. "Gradual normalization" means that the Fed's policy rate is likely to move slowly and in an upward direction over the indefinite future.

But what "gradual normalization" means and how it is interpreted by market participants can be two different things. Kocherlakota is worried that the market is interpreting the phrase as meaning the Fed will raise its policy rate slowly and in an upward direction. While this may very well be the case, it should be clear that this is not what Fed officials mean to say. Consider, for example, this report on a recent speech delivered by Boston Fed president Eric Rosengreen.


He [Rosengreen] added that the Fed’s policy committee stated it “expects that economic conditions will evolve in a manner that will warrant only gradual increases in the federal funds rate.”

This is obviously not a commitment to raise interest rates gradually and in an upward direction. It is merely a forecast of the economic conditions that are likely to prevail in the near future, together with a statement of how the Fed is likely to react to these conditions should they be realized. Again, and from the same speech,


The future path of rates, he said, will depend on incoming economic data, and how that data affects policymakers’ outlook for the economy.

This is a statement about state-contingent policy, together with a gratuitous forecast of the conditioning factors. These are two conceptually distinct objects that, when combined, give financial market participants the information they seem to crave: a statement about the likely path of interest rates over the foreseeable future.

Kocherlakota's concern is that this type of communication is misinterpreted by market participants as a commitment to a deterministic policy path. I think he's correct that some (perhaps many) people do misinterpret in this manner. If so, then the Fed faces a "credibility dilemma" because, well, what happens if the conditioning factors turn out not exactly as forecast? If future inflation comes in high above target, then the Fed will be forced to raise rates sharply and prematurely--reneging on its "commitment" to raise slowly--thereby "losing credibility." Or, if the economy turns south, the Fed may be forced to lower its policy rate--again, reneging on its "commitment" and "losing credibility." The apparent dilemma is that commitment along some dimension must necessarily be sacrificed.

Kocherlakota concludes with this:


So what, if any, plans should the Fed communicate? For one, officials must recognize that their expectations for the economy, like all forecasts, are likely to prove wrong. As a result, they should be much clearer about their willingness to make large and rapid changes in monetary policy. Instead of talking about gradual normalization, they should stress that they are ready to do “whatever it takes” to keep employment up and inflation near target.

I mostly agree with this suggestion. The part I disagree with (slightly) is where he says "they should be much clearer about their willingness to make large and rapid changes in monetary policy." I think--although I could be wrong--that the public is already generally aware that the Fed will make large and rapid changes in monetary policy should economic conditions dictate. Look at how the Fed reacted in 2008. Ask yourself: if inflation was to spike up to 5% tomorrow, how do you think the Fed would react? We all know how the Fed would react!

That is, I do not think that the issue Kocherlokota raises has anything to do with credibility. In 1971, the executive branch temporarily hampered the Fed's low-inflation credibility by abandoning the gold standard. [Take note, you End-the-Fed types--Fed chair Arthur Burns argued strongly against abandoning the gold standard.] But that reputation was won back (at a terrible price) by Paul Volcker in the early 1980s. Since that time, inflation has been relatively low and stable. Maybe it's not perfect, but it's an inflation record that many countries would envy. Consider this, for example. 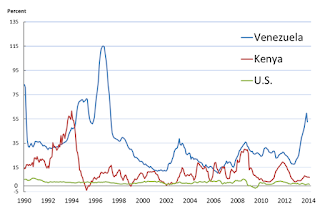 To the extent that we can count on anything, I think we can count on the Fed defending its record of low and stable inflation. It is arguably the only real credibility that a central bank has. On the plus side, it's the most important dimension of credibility. (There is also the second part of the dual mandate but a central bank's influence on long-run labor market conditions is more tenuous than its influence on long-run inflation.)

What about "forward guidance?" Yes, it works great in theory, if one assumes that a central bank can commit to take actions at future dates that are not in the best interest of the economy when that future time arrives (economists call this time-inconsistent policy). But let's just face it -- the reality is that commitment along this dimension does not likely exist. Does anyone really believe that the "commitment" made by FOMC voting members today will bind a future FOMCs comprised of completely different people with different points of view? Convince me otherwise.

The Fed is credible where it matters most: its commitment to keep inflation low and stable, and to do whatever it can, within its legislated powers, to help the economy function in the best manner possible for the good of the country at large. Is it a perfect institution? No. Can policies be improved along various dimensions? Almost surely. We're all in this together. Let's try to figure it out.

In the meantime, Kocherlakota is probably correct in suggesting that communications which imply (or are wrongly interpreted) as commitments that cannot possibly be met in most states of the world are not likely to be very useful. They may even prove counterproductive. But would taking an unexpected policy action necessarily whittle away at Fed credibility? I don't think so--not along the dimensions that matter. There is no credibility dilemma here. And it does little good to cast the issue in this light.

Postscript. Friday, March 25, 2016. Tim Duy weighs in here claiming that there are two types of credibility (hard and soft) and that the Fed cares about both of them (when it should perhaps only care about one).
Posted by David Andolfatto at 8:27 AM