The phrase secular stagnation was first introduced by Alvin Hansen in a speech he prepared for the AEA meetings in 1938: Economic Progress and Declining Population Growth. If you haven't read the speech, I recommend that you do--it's an interesting and easy read. (Alternatively, Tim Taylor provides a concise and accurate summary here: Secular Stagnation: Back to Alvin Hansen.)


Let's think about what things must have looked like for Hansen in late 1938. Earlier in the decade, the United States suffered a major economic contraction. From 1929-1933, real GDP declined by over 25%. And despite a robust period of growth from 1933-1937, the economy slipped back into recession in 1938. 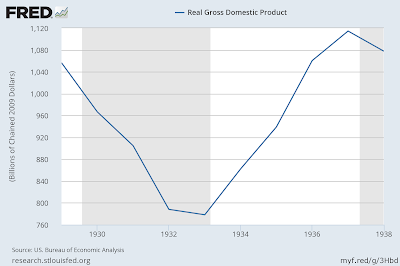 1938 must have looked disappointing (to say the least) for those living at the time. After a decade of economic hardship (the unemployment rate remained elevated throughout the episode) and recovery, the economy's capacity to produce material wealth in 1938 was no greater than its capacity in 1928. Was this the end of growth?

What sort of growth did Hansen have in mind? Well, writing in 1938, one would probably have been most impressed with the rapid rate of economic expansion that occurred in the late 19th century (the new technologies introduced early in the 20th century would have impressed as well, of course). That was an era of rapid technological progress, high population growth rates, and the widespread development of new territory. Associated with these developments was a rapid growth in investment opportunities and capital spending. Everyone seemed to be working hard. And even if progress was at times interrupted by recession, these episodes were short-lived with rapid recovery. (Personally, I don't think things were quite as rosy as the narrative above suggests, but let's stick to the main story.)

So that's roughly the evidence. What about theory? Hansen notes that earlier economists were focused mainly on how economic growth (driven by technological change, population growth, etc.) affected material living standards (the level of real per capita income). Later economists began to notice that growth and economic stability might be related (the central tenant of modern real business cycle theory). But more recently, Hansen writes, "the role of economic progress in the maintenance of full employment of the productive resources has come under consideration." (It is notable that the economists he cites for initiating this line of inquiry includes Wicksell and not Keynes; see David Laidler).

The theory Hansen espouses seems to relate the level of employment (say, as measured by the employment-to-population ratio or the unemployment rate) to the rate of economic growth. The rate of economic growth is determined by technological progress and population growth. Both of these forces are secular in the sense they tend to operate over extended horizons (i.e., over decades and not from quarter-to-quarter or year-to-year). The effect of growth is to elevate the desire for capital expenditure. A larger population stimulates the construction of residential capital. New industries and technologies stimulate the demand for business fixed investment. Workers are needed to build the stuff. Ergo, a higher rate of growth over long periods of time begets a higher rate of resource utilization over the same period of time (higher average employment rate, lower average unemployment rate).

But the story above is incomplete. After all, what was just described is not inconsistent with (say) real-business-cycle (RBC) theory. The equilibrium level of employment in that class of models could vary with the parameter that describes the economy's long-term growth rate (whether employment is increasing or decreasing in the growth rate is likely to depend on, among other things, the relative strength of substitution and wealth effects). It is theoretically possible to generate secular stagnation in an RBC model, where a low-growth regime generates a low-employment regime. But in the RBC interpretation, low employment could be an efficient outcome, given a lower pace of economic growth. It seems clear that Hansen is suggesting that the low employment observed in a low-growth regime is inefficient. He writes:

For it is an indisputable fact that the prevailing economic system has never been able to reach reasonably full employment or the attainment of its currently realizable real income without making large investment expenditures.

This is a bit of a mischievous statement in that it commingles an alleged fact with theory. (I don't want to make too much of this now, but consider my post here, in particular, the passage by Richard Rogerson related to this issue). Hansen does not get into theory very much at all, except to say:

I shall not attempt any summary statement of this analysis. Nor is this necessary; for I take it that it is accepted by all schools of current economic thought that full employment and the maximum current attainable income level cannot be reached in the modern free enterprise economy without a volume of investment expenditures adequate to fill the gap between consumption expenditures and that level of income which could be achieved were all the factors employed.

So my best guess of what we might have here is a version of Friedman's "plucking model" (with full employment serving as a ceiling or capacity constraint) combined with some classical notion of the difficulty associated with matching the flow of national saving with the flow of national investment. This process evidently does not work well as it should unless the demand for investment is high--which, in turn, is not generally possible unless the economy (technology and/or population) is growing rapidly.

While the hypothesis seems similar to Keynes (1936) in that depressed investment is the proximate cause of persistently high unemployment, there is (I think) an important difference. Keynes emphasized the role of "animal spirits" in determining investment demand. Depressed expectations over the "prospective rate of profit on new investment" might become a self-fulfilling prophecy (see Farmer). Although I could be wrong, I don't ever recall Keynes suggesting that the cure for high unemployment was more rapid technological progress. I think of Keynes (1936) as an explanation for depressed levels, unrelated to growth phenomena.

Hansen, on the other hand, could be interpreted as holding the view that expectations are more firmly anchored on economic fundamentals ("...we are forced to regard the factors which underlie economic progress as the dominant determinants of investment and employment.") For this reason, Hansen seemed less enamored than Keynes on the use of expansionary fiscal policy to combat high unemployment. After all, if the fundamental problem is low growth, attempts to boost "aggregate demand" can at best confer only transitory benefits. Moreover, these benefits may over time be swamped by cost considerations, like a mounting public debt.

Insofar as Hansen (1939) provides policy advice, it sounds not so much like a pro-growth agenda as it does a set of anti-anti-growth recommendations. To paraphrase: "Population growth is fading. There are no new territories to settle and exploit. We can only hope for more technological advancement, so don't do anything to hamper this last great hope of ours. Except that it seems that we are: the growing power of trade unions, trade associations, and other monopolistic practices are restricting technological advance. This is a great folly."

Hansen's secular stagnation hypothesis was largely forgotten over time. I'm not entirely sure why this was the case, especially in light of the subsequent popularity of Keynesian theory. Maybe it had something to do with their respective policy recommendations. Active demand management sounds more appealing than dismantling trade unions, I suppose.

I sometimes hear people suggest that Hansen's hypothesis fell out of favor because it was proved wrong. Shortly after he wrote, the growth factors took off and the unemployment rate remained low on average. However, Hansen did not exactly offer a prognostication--his theory is better thought of (like any theory) as a conditional forecast.

While the settlement of new territory played a big role in the past, it was not likely to do so in the future (and in fact did not, as of 2016). And while medical technology played a big role in lowering mortality rates in the 19th and early 20th century, "no important further gains in this direction can possibly offset the prevailing low birth rate." To say that Hansen did not forecast the coming baby boom is correct only insofar as Hansen did not make any forecast--just a conditional statement that if the prevailing low birth rate was to persist into the future, then low population growth would contribute to depressed demand for capital formation. He was, of course, plainly concerned that the trend might continue, but that's not the same thing as asserting it would. His caution in making predictions is evident when he writes:

Of first-rate importance is the development of new industries. There is certainly no basis for the assumption that these are a thing of the past. But there is equally no basis for the assumption that we can take it for granted the rapid emergence of new industries rich in investment opportunities as the railroad, or more recently the automobile, together with all the related developments, including the construction of public roads to which it gave rise.

So maybe the pace of technological advance will accelerate. Or maybe it won't. It's not something we can take for granted. Hansen seems concerned about the prospect for future growth. But he's not asserting, as Robert Gordon seems to, that our best days are necessarily behind us. He notes, quite properly in my view, the sporadic nature of growth:

Nor is there any basis, either in history or theory, for the assumption that the rise of new industries proceeds inevitably at a uniform pace. The growth of modern industry has not come in terms of millions of small increments of change giving rise to smooth and even development. Characteristically, it has come by gigantic leaps and bounds.

He cites D. H. Roberston for this view, but it is also a recurring theme in Schumpeter's work (see my earlier post relating Schumpeterian growth to secular stagnation).

So, where does this leave us? No, I don't think Hansen's theory was proved wrong by subsequent developments. That the conditioning factors turned out not to prevail should not be construed as a rejection of the theory. The theory should be evaluated on other grounds.

The central proposition is that high growth (via technology and or population) is necessary to keep labor near "full employment" (the level of output near "potential.") In particular, high growth is necessary to stimulate the capital spending that will employ the labor input. I am curious to know what sort of empirical evidence one might bring to bear on this hypothesis. We have a lot more data at our disposal than Hansen. How should this data be organized? Should we estimate a Hamilton regime-switching model on growth rate regimes and correlate estimated growth regime against the average employment-to-population ratio? As well, there is the perennial question of how to identify theoretical objects like "full employment" or "potential GDP" in the data.

And even if we should find support for the hypothesis, there is the question of what sort of intervention, if any, might be desirable. On this issue, Hansen writes:


How far such a [stimulative] program, whether financed by taxation or borrowing, can be carried out without adversely affecting the system of free enterprise is a problem with which economists, I predict, will have to wrestle in the future far more intensely than in the past.

Well, he certainly got that prediction right!

Posted by David Andolfatto at 1:59 PM