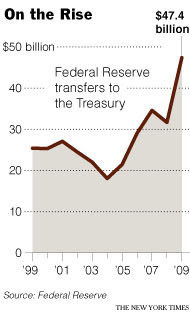 Posted by David Andolfatto at 9:21 AM 8 comments:

Make no mistake. The Fed, like any institution, should be subject to criticism and review. At the same time, any such criticism should be fair and balanced (especially if one expects enlightened legislation to emerge from the impending Dodd Bill).
Posted by David Andolfatto at 8:23 AM 2 comments:

This suggests that a happy medium might be struck. Of course, the Fed should reveal the details concerning its emergency lending practices. But only with a sufficient time-lag. The exact length of this time-lag is something that can be debated. Does 5 years sound reasonable?
Posted by David Andolfatto at 10:33 AM 8 comments:

The article does not say whether this person was ultimately given government assistance. What would you guess?
Posted by David Andolfatto at 7:57 AM 1 comment:

[1] About 47% of Americans will pay no federal income tax in 2009
[2] The top 10% of earners pay about 73% of all income tax collected by the federal government
[3] The bottom 40% of earners will (on average) pay negative taxes (are net recipients of transfer income)
Posted by David Andolfatto at 7:19 AM 3 comments: