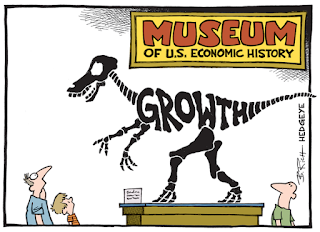 In what follows, I'll take the view that secular stagnation refers to prolonged episodes in which growth in real per capita income (GDP) is lower than its long-run average.

Most economists agree that long-run growth in material living standards (real per capita income or consumption) is the product of technological progress. Contemporary business cycle models (at least, those used for monetary policy) assume that technological progress occurs more or less in a straight line. This abstraction may be fine for some purposes, but I never much liked it myself. As a PhD student, I was influenced by Schumpeter's 1939 masterpiece Business Cycles.

Schumpeter (1939) emphasized that there is no God-given reason to expect growth to occur in a straight line. Research and development, and the process of learning in general, can be expected to generate innovations of random sizes and at random intervals. Moreover, any given innovation takes time to diffuse. Economy-wide productivity does not jump instantaneously with the arrival of the internet. I like this quote from his book:


‘‘Considerations of this type [the difficulty of coping with new with new things] entail the consequence that whenever a new production function has been set up successfully and the trade beholds the new thing done and its major problems solved, it becomes easier for other people to do the same thing and even improve upon it. In fact, they are driven to copying it if they can, and some people will do so forthwith. Hence, it follows w that innovations do not remain isolated events, and are not evenly distributed in time, but that on the contrary they tend to cluster, to come about in bunches, simply because first some, and then most, firms follow in the wake of successful innovation.’’ [p. 100]

It was this passage that led me to think of a model in which technological innovation drove growth but in a manner that was uneven because of diffusion lags. The notion that a new general purpose technology might spread like a contagion to generate the classic S-shaped diffusion pattern in GDP seemed like a very interesting hypothesis to investigate. 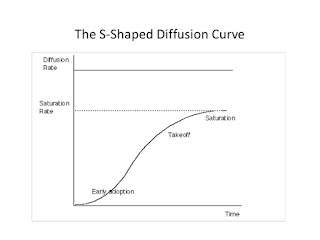 I was also influenced by Zvi Griliches' famous empirical investigation of the diffusion of hybrid corn in the United States:

In my paper (actually, the second chapter of my PhD thesis, published in 1998 with Glenn MacDonald) I saw this: 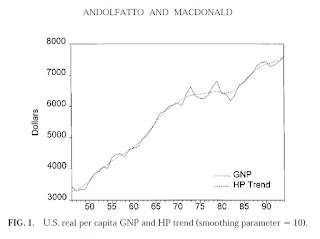 And so Glenn and I built a dynamic general equilibrium model where firms were motivated to innovate and imitate superior technologies. We estimated parameters so that the model reproduced the smooth but undulating path of GDP depicted in the figure above. I think I see these patterns in more recent TFP data as well (source): 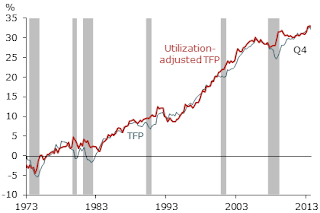 According to this interpretation, episodes of secular stagnation are largely an inevitable byproduct of the process of technological development and growth. Accepting such an interpretation does not, in itself, have any implications for the desirability of policy interventions. But it does call into question the efficacy of certain types of interventions. In particular, do we really believe that more QE will spur future economic growth? Or should policy attention be directed elsewhere?

Now, one might object, as Larry Summers does here, that "If the dominant shock were slower productivity one might expect to see an increase in inflation." The type of reasoning that underpins this view is the simple Quantity Theory of Money equation: PY=VM. Ceteris paribus (holding MV fixed) a decrease in real income Y should induce an increase in the price level P. Maybe the 1970s provides the empirical basis for this view.

But there is no theoretical reason to believe that productivity slowdowns, or indeed, expected productivity slowdowns, should be inflationary. It's very easy to demonstrate, in fact, that "bad news" in the form of a slowdown in productivity leading to depressed expectations over the net return to capital spending can cause a "flight to safety" to government debt instruments (including money). The effect of such portfolio substitution is to depress bond yields and the price-level (see here and here for example).  But even apart from these effects, the behavior of inflation depends critically on the nature of monetary and fiscal policy.