Is the Deficient Demand Hypothesis Consistent with the Facts on Labor Market Turnover?

What's holding back the U.S. labor market? Why does employment growth remain slow? Why does the unemployment rate remain so persistently high? Is a prolonged jobless recovery possible? These questions are naturally at the forefront of current policy debates.

Some economists believe--were trained to believe, I would say--that the lacklustre performance of the labor market is easy to explain: there is a lack of demand. Just ask firms why they're not hiring: a lack of product demand frequently tops the list reasons provided.

I'm not sure that economists can rely on answers like this to identify the type of aggregate shock that is afflicting the economy. Think about the original multisector real business cycle model of Long and Plosser (JPE 1983). A negative productivity shock to one sector in their model economy could lead to a decline in the production and employment in many sectors of the economy. This is because firm level production functions use the intermediate goods of many sectors as inputs into their own production processes. To an individual producer, it would appear as the demand for his product is declining. And he would be correct. This lack of demand, however, bears no relation to the concept of "deficient demand" in the Keynesian sense.

In any case, let us take this deficient demand hypothesis seriously for the moment. Then I want to ask how this hypothesis might be reconciled with the labor market data I present below.

The blue line plots the UE flow (the flow of workers who made a transition from unemployment to employment). Leading up to the recession, we see that in a typical quarter, roughly 2,000,000 workers per month exited unemployment into employment.

When the recession hits, there is a large upward spike in the EU flow, as one would expect (people losing their jobs and becoming unemployed). This part seems consistent with the deficient demand hypothesis. However, look at what happens to the UE flow. While it does not rise as sharply as the EU flow, it rises nevertheless...and continues to remain high even as the EU flow declines. Is this surge in job finding rates*(see update below) among the unemployed consistent with the deficient demand hypothesis?

Note: the y-axis on the graphs below should read "thousands," not "millions." (Thanks to himaginary). 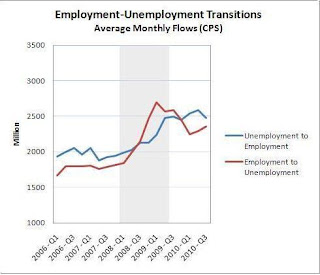 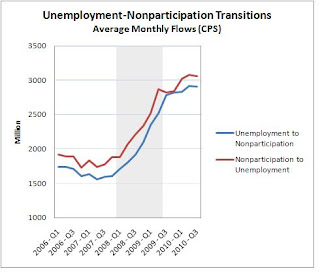 As you can see, these monthly flows are huge. And as one might expect, the UN flow rises dramatically during the recession. These are "discouraged workers;" and the phenomenon seems consistent with the deficient demand hypothesis.

But again, the surge in discouraged workers appears to be more than offset by a surge in "encouraged workers." How is this consistent with the deficient demand hypothesis?

It seems to me that this sort of data appears to be more consistent with an increase in reallocative activities in the labor market, rather than deficient demand. But maybe not. And if not, then I am curious to know what sort of stories people might tell to square their pet hypothesis with the data above.

Nick Rowe asks about the NE and EN flows during this period. Here is the data: 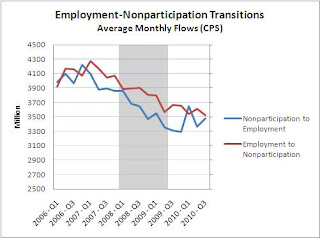 In the following diagram, I plot the transitions into and out of employment. To do this, I define nonemployment = unemployment + nonparticipation. 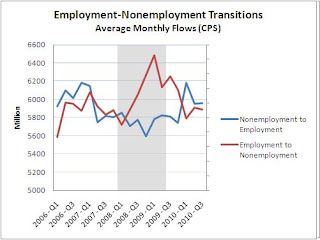 If anyone would like to see anything else plotted, just let me know.

I have to admit to being puzzled by many of the responses I received on this post. And then I came across this comment on my post by Brad DeLong: Department of Huh? I suddenly see what appears to be confusing people; in particular, the claim I make above (starred) about the surge in job finding "rates." This statement definitely belongs in the Department of D'oh!

Let me explain what happened here. When looking at labor market data, I usually deflate all series by some population measure. And so, I construct objects that I call the employment rate, the unemployment rate, the job finding rate, and so on. Perhaps I should call them "ratios" instead of "rates." In any case, for the purpose of this blog post, I chose to post levels. There is clearly a surge in the UE flow. And of course, there is also a surge in the job finding "rate" when one defines this object as UE/P (the conventional definition of this rate is UE/U). Mea culpa for the confusion.

Having said this, my typo in no way detracts from the substantive question I raised: Are these (level) flows consistent with the deficient demand hypothesis?

The data shows a large increase in the EU (job losers) and UN (discouraged worker) flows. It seems easy to understand these flows in the context of a deficient demand story. What I was trying to get people to do, however, was to square this same story with the large increase in the UE (job finders) and NU (encouraged worker) flows. How does depressed demand, leading to reduced job openings, also encourage more workers to look for work? It's an interesting and legitimate question, I think. And the answer is not obvious.

I expressed a view that the phenomena in question might be difficult to square with a deficient demand story and invited readers to share their thoughts on the matter; i.e., perhaps I was missing something. I want to thank everyone who responded thoughtfully to the question I posed.
Posted by David Andolfatto at 9:57 AM