The Great Canadian Slump: Can it Happen in the U.S.?

The large decline in U.S. employment has had me reminiscing about Canada's similar experience in the early 1990s. I remember Pierre Fortin's presidential address to the Canadian Economic Association in 1996, entitled The Great Canadian Slump. Fortin seems to place much of the blame for this episode on the Bank of Canada; a claim hotly contested by Chuck Freedman and Tiff Maclem of the BoC here. I see that Stephen Gordon of WCI was reflecting on this episode in Canadian economic history as well; see here. 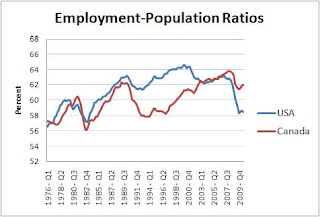 The two series are similar up until about 1990. Then the recession hit. And it hit much harder and longer for Canada.

In 1990, E/P dropped by less than 2 percentage points in the U.S.; and dropped by about 4 percentage points in Canada. Now take a look at 2008; it is exactly the opposite. Canadians, apparently, don't need a world financial crisis to generate crisis-like employment slumps. In fact, the financial crisis appears to have had relatively little impact on Canada (that is, relative to the U.S., and relative to Canada in 1990).

One thing that might be of interest (or concern) for Americans is the length of Canada's employment slump. The E/P ratio essentially flat lined for about 5 or 6 years; and did not attain its pre-recession peak of 62% until well into the next decade.

Let me normalize real per capita GDP and the E/P ratio each to 100 in 1990:1. Here is what Canada's output and employment history looks like for the 1990s:

Now, that's what I call a jobless recovery!

It's interesting to look at other measures of labor market activity too. The next graph shows the participation rates (labor force divided by adult population): 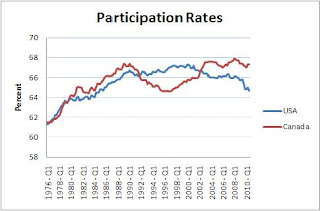 Part rates are similar until 1990, and then exhibit almost a mirror image. Note that the U.S. participation rate shows some evidence of secular decline since reaching its peak. The next graph plots unemployment rates (unemployment divided by labor force): 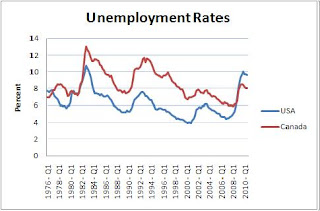 The large gap in cross-country unemployment rates that emerged in the early 1980s and persisted for two decades elicited a fair amount of hand-wringing and a collective gnashing-of-teeth in Canada. To see what people were talking about, have a look here.

The main point I want to convey here for Americans is that the prospect of a prolonged jobless recovery, with persistently high unemployment rates, is not outside the realm of possibility. Such an episode has occurred in the recent past and, moreover, it occurred in an economy that is more similar to the U.S. than perhaps any other (in particular, Canada is not Japan).

This does not, of course, mean that a jobless recovery is inevitable. But I do think it might be worth exploring what parallels (if any) exist between these two episodes, and to see what might be learned from it. Will keep you posted, but in the meantime, feel free to share your thoughts.
Posted by David Andolfatto at 2:06 PM