Nominal Interest Rates and Inflation Expectations in the U.S. 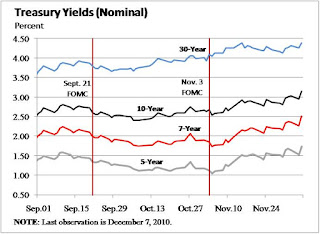 ﻿
Now, I know what some of you might be thinking. First, you might be thinking how it is possible that these yields are rising when QE2 was expressly designed to bring these rates down. Well, as Minneapolis Fed president Narayana Kocherlakota explains here, the idea was to lower the long-run real interest rate; i.e., the nominal interest rate net of expected inflation. For this to be true, the nominal rate increases above should be consistent with declines in the real interest rate; and to ascertain this, we need a measure of inflation expectations. 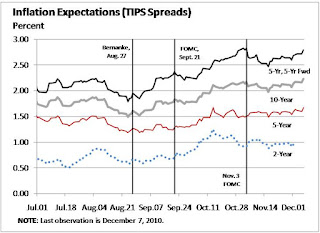 What we see in the chart above is that since QE2 was announced, inflation expectations have moved up by less than the rise in nominal interest rates. What this means is that long-term real interest rates appear to have increased since QE2 was announced in early November. Interestingly, many of my banker friends tell me that this is good news (too much rum in the eggnog, no doubt).

How does one make sense out of all this? Well, here is one story. Evidently (so I am told), the desired impact of QE2 may have manifested itself largely in the period leading up to its official announcement. It is true that the market was widely expecting some sort of quantitative easing. And nominal rates did largely decline, or remain roughly stable, in between FOMC meetings. At the same time, inflation expectations started to rise significantly, having the desired effect of lowering long-term real interest rates. Fed types like to think that this action has stimulated the U.S. economy (certainly, the stock market does not appear to be complaining).

Since early November, nominal rates are climbing higher...with inflation expectations remaining more or less stable (well...some measures do appear to be creeping up). So long term real interest rates appear to be rising. And this, evidently, is a bullish signal, since long-run real rates largely reflect expectations of real growth in the future. Of course, whether the Fed's QE2 policies actually had anything to do with these higher future real rates is debatable. But in any case, it's something to mull over. Pass that eggnog!
Posted by David Andolfatto at 12:22 PM