David Beckworth has a new post up suggesting that the Fed's floor system has discouraged bank lending by making interest-bearing reserves a relatively more attractive investment; see here. I've been hearing this story a lot lately, but I can't say it makes a whole lot of sense to me.

Here's how I think about it. Consider the pre-2008 "corridor" system where the Fed targeted the federal funds rate. The effective federal funds rate (FFR) traded between the upper and lower bounds of the corridor--the upper bound given by the discount rate and the lower bound given by the zero interest-on-reserves (IOR) rate. The Fed achieved its target FFR by managing the supply of reserves through open-market operations involving short-term treasury debt.

Consider a given target interest rate equal to (say) 4%. Since the Fed is financing its asset holdings (USTs yielding 4%) with 0% reserves, it is making a profit on the spread, which it remits to the treasury. Another way of looking at this is that the treasury has saved a 4% interest expense on that part of its debt purchased by the Fed (the treasury would have had to find some additional funds to pay for that interest expense had it not been purchased by the Fed).

But the question here is why one would think that moving from a corridor system to a floor system with interest-bearing reserves inherently discourages bank lending. It is true that bank lending is discouraged by raising the IOR rate. But is it not discouraged in exactly the same way by an equivalent increase in the FFR? If I am reading the critics correctly (and I may not be), the complaint seems to be more with where the policy rate is set, as opposed to anything inherent in the operating system. If the complaint is that the IOR has been set too high, I'm willing to agree. But I would have had the same complaint had the FFR been set too high under the old corridor system.

Alright, now let's take a look at some of the data presented by David. Here, I replicate his Panel A depicting the evolution of the composition of bank assets. 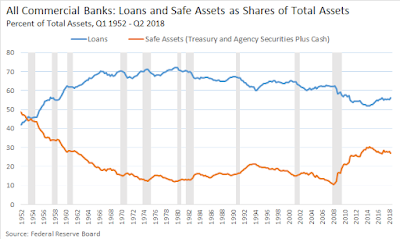 David wants to direct our attention to the period after 2008 when the Fed flooded the banking system with reserves and started paying a positive IOR rate. The large rise in the orange line since 2008 was due almost entirely to reserves and not other safe assets. This suggests that banks were motivated to hold interest-bearing reserves instead of private-sector interest-bearing assets (loans). He writes:


Something big happened in 2008 that continues to the present that caused banks to allocate more of their portfolios to cash assets and less to loans. While the financial crisis surely was a part of the initial rebalancing, it is hard to attribute what appears to be 10-year structural change to the crisis alone. Instead, it seems more consistent with the critics view that the floor system itself has fundamentally changed bank portfolios allocation.

I think the diagram above is rather misleading since all it shows is portfolio composition and not the level of bank lending. Here's what the picture looks like when we take the same data and deflate it by the GDP instead of bank assets, 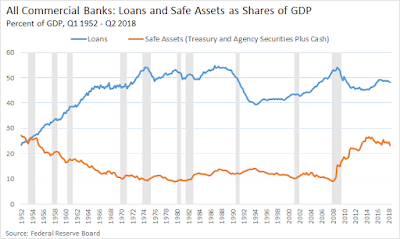 According to this picture, bank lending is close to 50% of GDP, not far off its historical average and considerably higher than in the decade following the S&L crisis (1986-1995). Here's what commercial and industrial loans as a ratio of GDP looks like: 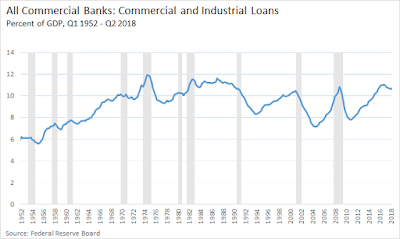 It's no surprise that bank lending contracted during and shortly after the crisis. One could even make the argument that paying positive IOR contributed to the contraction. But as I mentioned above, one could have made the same argument had the FFR been kept at 25bp. Again, this criticism has less to do with the operating system than it does with where the policy rate was set. In any case, note that commercial and industrial loans are presently above their pre-crisis levels (as a ratio of GDP).

To sum up, I do not believe that a floor system inherently discourages bank lending as some critics appear to be arguing. Now that the Fed is paying IOR, reserves are essentially viewed by banks as an alternative form of interest-bearing government debt. New regulations since the crisis have induced banks to load up on safe government assets. But as the following figure shows, this has not come at the expense of private lending. 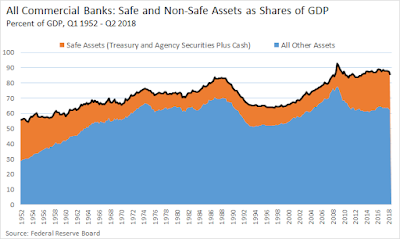 Banks are lending about as much as they have over the past 50 years (relative to GDP). Bank lending as a ratio of bank assets may be low, but this is because banks are loaded up on safe assets--not because they've cut back on their lending activity.

Posted by David Andolfatto at 11:51 AM