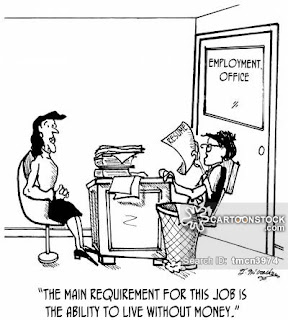 I had an interesting chat with a colleague of mine the other day about the labor market. In the course of conversation, he mentioned that he used to teach a class in labor economics. Naturally, an important lesson included the theory of labor supply. Pretty much the first question asked is how the supply of labor can be expected to change in response to a change in the return to labor (the real wage).

My colleague said that for years he would preface the theoretical discussion with a poll. He would turn to the class and ask them to imagine themselves employed at some job. Then imagine having your wage doubled for a short period of time. How many of you would work more? (The majority of the class would raise their hands.) How many of you would not change your hours worked? (A minority of hands). How many of you would work less? (A sprinkling of hands). At the end of the polling, he'd start teaching a standard theory of labor supply and using it to interpret the poll results (substitution vs. wealth effects).

My colleague administered this poll for over a decade. The results were always the same. (How satisfying.)

Then, one day, for no apparent reason, he decided to mix it up a little bit. Instead of asking the class to imagine an increase in the wage rate, he asked his students to consider a decrease in their wage rate. He was expecting a symmetrically opposite response. To his shock, a majority of the class responded that they would work more. Only a minority replied that they would work less or not change their hours.

Surely, this was an anomaly? But when he repeated the experiment with another class, he got the same result. He mentioned it to a colleague of his, who then ran the same experiment with his class and he too confirmed the result. What was going on here? If true, then employers can apparently get more labor out their workers by lowering their wages?!

The phenomenon here seems related to the evidence of "income targeting" among some groups of workers; see, for example, the classic study of New York taxi drivers by Camerer, Babock, Lowenstein and Thaler (QJE May, 1997). Evidently, inexperienced taxi drivers tend to work less when the return to working is high, and work more when the return to working is low. This behavior doesn't quite square with the phenomenon reported by my colleague. The effect there appeared to be asymmetric: students reported willing working more at a lower wage, but also reported willing working more at a higher wage. In both cases, however, it seems that the existence of some fixed obligation (e.g., monthly food and rent payments) plus no ready access to credit could explain why workers might be willing to work longer hours when the return to work declines.

I'm not sure if these findings shed any light on the state of the labor market today. But it is interesting to speculate. Conventional supply/demand analysis isn't always the best guide.
Posted by David Andolfatto at 7:47 AM