Racial Diversity in the Supply of U.S. Econ PhDs

This post is motivated by Eshe Nelson's column "The Dismal Cost of Economics' Lack of Racial Diversity." I was especially struck by this data -- out of the 539 economics doctorates awarded to U.S. citizens and permanent residents (by U.S. institutions), only 18 of the recipients were African-American. 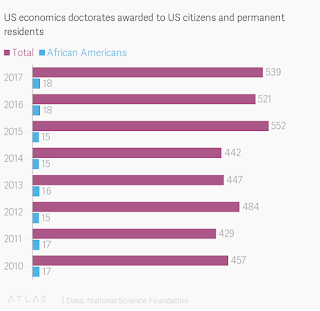 I thought it would be of some interest to see what the data looks like more broadly over other groups and over a longer period of time. I thank my research assistant, Andrew Spewak, for gathering this data (from the National Science Foundation).

Let's start with the raw numbers first. The data is aggregated into 5-year bins beginning in 1965 and up to 2014. The orange bars represent the number of econ PhDs awarded to U.S. citizens and permanent residents (by U.S. institutions) over a given 5-year period. The blue bars represent the total number of doctorates awarded. 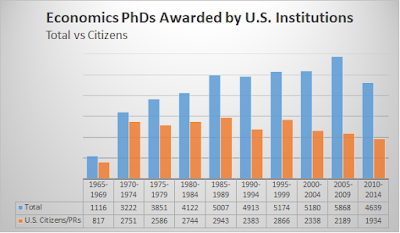 Now, let's stick with citizens for the moment and decompose the data across various "racial" categories. The following figure reports the share of econ doctorates earned by various groups. 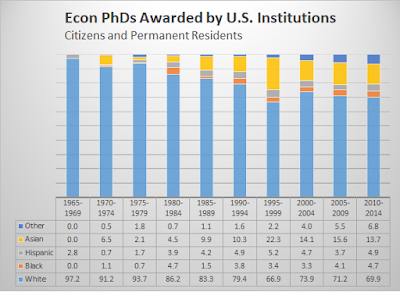 The most dramatic pattern is the relative decline of PhDs awarded to Whites and the increasing share of degrees awarded to Asians (there is also a noticeable uptick in the "Other" category which includes groups like Native Americans). Blacks and Hispanics have made some gains since the early years, but have since stabilized to about a 5% share.

I now reproduce the picture above, but this time looking at total PhDs awarded. 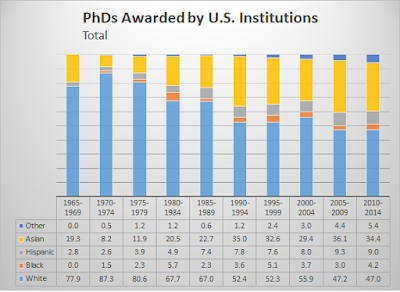 The relative decline of Whites here is even more evident, as is the increasing share of Asians. It is interesting to note that while the share of Hispanics has increased noticeably by including foreign (non PR) recipients, the same is not true for Blacks. One possibility here is that English-speaking foreign black students may be more likely to target the U.K. over the U.S. and that French-speaking blacks may be more likely to target French-speaking institutions in France or former French colonies, like Quebec. (It would be interesting to examine these statistics for Canadian universities).

Finally, let's take a look at how the share of PhDs across groups lines up with their share of the total population. Here is what the data looks like for the period 2010-2014. 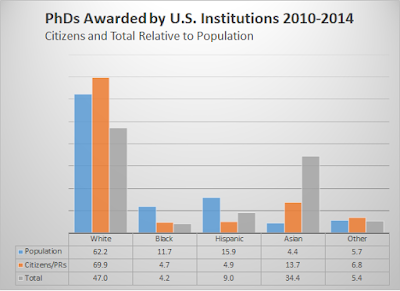 To conclude, there are some clear racial imbalances here. I think most people would agree that increasing Black and Hispanic representation in the U.S. economics profession is a good idea (for many of the reasons highlighted in Eshe's column). It would also be interesting to see how these patterns have evolved in other countries.
Posted by David Andolfatto at 12:53 PM