I admit this is a rather strange title for a post, but bear with me. Every once in a while I reflect back on the so-called "taper tantrum" event in the summer of 2013 when Fed Chair Ben Bernanke made an off-the-cuff remark that the FOMC was thinking of maybe slowing down the pace QE3 asset purchases (see here). The stock market had a temporary sell-off, which turned out to be no big deal. What I find more interesting is how long bond yields rose sharply and persistently. Even more interesting, real bond yields behaved in this manner--see the figure below.

OK, so maybe the initial sell-off of bonds could be interpreted as the market being surprised that QE3 (an open-ended program) might terminate earlier than expected. But I just can't believe that QE programs can have such persistent effects on real interest rates. If that's the case, then what explains the broad pattern on display above, including the decline in real yields over 2011-2013?

I attribute it largely to the recession of 2012-2013. Wait, what recession, you say? Well, let's take a look. Contrary to standard practice, I'm going to look at per capita consumption (of nondurables and services). Here is what the data looks like. 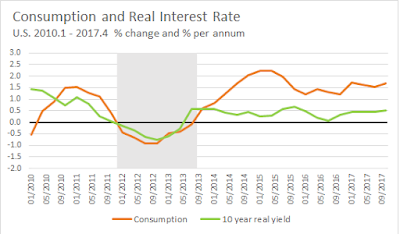 Consumption growth per capita was negative from 2012.1-2013.3. The taper tantrum occurred in 2013.3.  As you can see by this measure, the economy weakened considerably over the period 2011-2013. Over the same time, real bond yields declined. This is most easily explained as the consequence of an increasingly bearish outlook manifesting itself as an increase in the demand for safety (bonds).

Consumption growth turned positive in 2013.4, and continued to climb well into 2015. So while the tantrum may have contributed to the spike up in yields, the reason they stayed higher is because of an increasingly bullish outlook for the economy.

Does this interpretation make sense? What events were leading to the bearish outlook beginning in 2011. Certainly the events in Europe had something to do with it. I also think that domestic factors had a role to play, in particular, fiscal policy. Consider the following diagram. 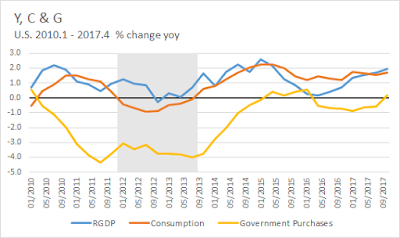 What would the consumption and GDP dynamic have looked like if government purchases (per capita) had instead remain constant?

Posted by David Andolfatto at 9:15 AM