Fiscal theories of the price-level

This post is me thinking out loud about how fiscal considerations may influence the price-level.  The question of what determines the price-level is an old one. It's a question that economists struggle with to this day.


To begin, what do we mean by the price-level? Loosely, the price-level refers to the "cost-of-living," where cost is measured in units of money. Living refers to the flow of services consumed (destroyed) for the purpose of survival/enjoyment. (Note that the cost-of-living might alternatively be measured as the amount of labor one must expend per unit of consumption, but this would require a separate discussion.)

Measuring aggregate material living standards is challenging for two reasons. First, people consume a variety of goods and services. Suppose that the price of food goes up and the price of shelter goes down. Does the cost-of-living go up or down? Second, different people have different material needs/wants (and individual wants and needs change over time too). Statisticians do the best they can to address these complications by constructing "average consumption bundles" as done in the calculation of the Consumer Price Index (CPI). The following diagram plots the change in the price-level (the inflation rate) for several categories of goods and services: 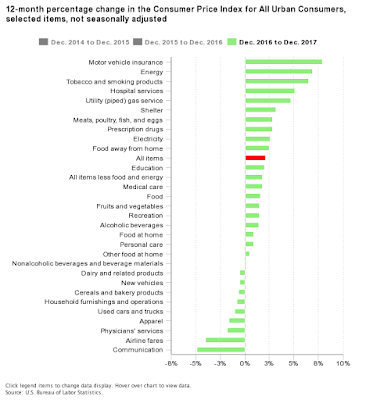 In what follows, I'm going to abstract from inflation and focus only on the theory of the price-level (inflation is the rate of change in the price-level over an extended period of time). To this end, think of a very simple world where the real GDP (y) is fixed and determined exogenously (independent of monetary policy). Assume that the expected rate of inflation is zero. Then, by the Fisher equation, the nominal interest rate corresponds to the real interest rate. I want to think of this interest rate as being potentially influenced by monetary policy (I like to think of r as representing the real yield on treasury debt, where treasury debt possesses a liquidity premium.)

Perhaps the oldest theory of the price-level is the so-called Quantity Theory of Money (QTM). It seems clear enough that people and agencies are willing to accept and hold money because money facilitates transactions--it provides liquidity services. In the simplest version of the QTM, the demand for real money balances takes the form L(y), where L is increasing in y. The idea here is that the demand for liquidity is increasing in the level of aggregate economic activity (as indexed by y).

Condition [1] can be explained as the consequence of the "hot potato" effect. The idea is that someone must be willing to hold the extant money supply. If M/P > L, then the money supply exceeds money demand. In this case, people will presumably try to dispose of their money holdings (by spending them on goods and services). People accepting money for payment will be thinking the same thing--they are willing to accept the money, but only selling their goods at a higher price. The "hot potato" effect ceases only when condition [1] holds. The same logic applies in reverse when M/P < L (with everyone wanting to get their hands on the potato).

Now, suppose that y varies over time. Then the QTM suggests that a central bank can keep the price-level stable at P0 by letting the money supply move in proportion to money demand; i.e., M = L(y)*P0. This is what is meant by "furbishing an elastic currency." This reminds us as well that interpreting money-price correlations in the data are tricky if money demand is "unstable."

O.K., so now let's see where fiscal policy fits in here. Let D denote the outstanding stock of government debt. If a central bank is restricted to create money only out of government debt, then we can write M = θD, where 0 < θ < 1 is the fraction of the debt monetized by the central bank. If the central bank wants to increase the money supply, it would conduct an "open market operation" in which it buys bonds for newly-issued money, resulting in an increase in θ. Note that the money supply may increase through changes in D for a constant θ.

The difference T - G is called the primary budget surplus (deficit, if negative). So another way to read [2] is that the interest expense of the government debt must be financed with a primary surplus. Note that if r < 0, then the government is in a position to run a perpetual primary deficit. (The more general condition is r < g, where g is the growth rate of the economy, which I've normalized here to be zero.)
In most monetary models, the fiscal policy plays no role in determining the price-level. The reason for this lies in the implicit assumption that taxes are non-distortionary (e.g., lump-sum) and that the fiscal authority passively adjusts T to ensure that condition [2] holds.  This latter assumption is sometimes labeled a Ricardian fiscal regime. In a Ricardian regime, fiscal policy does not matter for the price-level. To see this, suppose that the central bank increases r. Then the fiscal authority increases T (or decreases G) with no change in the money supply or price-level. Or, imagine that the fiscal authority increases D. In this case, the central bank can keep the money supply constant by lowering θ, the fraction of debt it chooses to monetize. If so, then B will increase. In a Ricardian regime, the fiscal authority will again either increase T (or decrease G), leaving the price-level unchanged.

But suppose fiscal policy does not behave in the Ricardian manner described above. To take an example, suppose that the fiscal authority instead targets T, or T-G, or (T-G)/P, etc. For concreteness, suppose it targets the real primary surplus τ = (T-G)/P.  In this case, condition [2] can be written as,

Condition [3] forms the basis of what is known as the fiscal theory of the price-level (FTPL); see Cochrane (1998). The idea is as follows. Imagine a world where there is no need for money (a cashless economy), so that condition [1] is irrelevant. Imagine too that the real rate of interest is determined by market-forces, so that r > 0 represents the "natural" rate of interest. Finally, imagine that the outstanding stock of debt D = B is nominal. Then the price-level is determined by condition [3] which, while resembling a government budget constraint, is in fact a standard stock-valuation equation. To see this, rewrite [3] as follows,

The right-hand-side of [4] represents the present value of a perpetual flow of primary government budget surpluses τ. The left-hand-side of [4] measures the real value of the government's debt. The equation [4] asserts that the real value of government debt is equal to the present value of the stream of primary surpluses. This is analogous to the way one might value the equity of a company that generates a stream of profits τ.

Note that condition [4] looks a lot like condition [1]. We can use the same "hot potato" analogy to describe the determination of the price-level in this case. For example, suppose that (B/P) > τ/r. Then people and agencies will presumably want to sell the over-valued government debt (for goods and services). People are willing to accept these nominal claims, but only if they are sold more cheaply--that is, if the goods sold to acquire the bonds can be sold at a higher price. As before, this hot potato effect ceases only when condition [4] holds.

I'm still not sure what to think about the FTPL. While I lean more toward the QTM view, I do believe that fiscal considerations can have an important influence on the price-level. The way I'm inclined to think about this, however, is as follows.

Since nominal government debt represent claims against government money, it's not surprising that such debt inherits a degree of "moneyness." To the extent this is true, the measure of money M used in equation [1] should be expanded to include the liquid component of government debt. Let X < B denote the liquid component of government debt. There are a few ways to think about this. One obvious way is to imagine that the banking sector creates deposit liabilities out of X. Or we could imagine that X is accepted directly as payment for goods and services, at least, for a subset of agencies (China, for example, effectively exports goods and services for X). In any case, the appropriate measure of money is given by M + X. In the limiting case where X = B, the relevant money supply becomes the entire government debt D = M + B, so that condition [1] becomes,

In a world where government debt becomes increasingly more relevant as an exchange medium than central bank money, control over the money supply is effectively transferred to the fiscal authority.  This is another sense, distinct from the FTPL, in which fiscal policy might influence the price-level. The difference boils down to the source of money demand -- is it primarily liquidity-preference, or is it because money/debt instruments are viewed as tax-backed liabilities?

There is, of course, much that I've left out here.  While the assumed invariance of real economic activity to monetary and fiscal policy is not a bad place to start for the question at hand, it is clearly not a good place to end. As well, the model should be extended to permit sustained inflation. All of this can be easily done and I'll try to come back to it later.

Something I do not think is critical for the issue at hand is modeling private money creation (beyond the monetization of government debt modeled above). To the extent that banks monetize positive NPV projects, the money they create out of private assets (in the act of lending) creates value that is commensurate with additional liabilities created. In short, accretive share issuances (good bank loans) are not likely to  be dilutive (inflationary). Of course, the same is true of newly-issued government money if the new money is used to finance positive NPV projects (including the employment of labor in cases of severe underemployment).

Posted by David Andolfatto at 8:22 PM