The Neo-Fisherian proposition is that a persistent policy-induced increase in short-term nominal interest rates will lead to higher inflation in the long-run. John Cochrane, one of the main proponents of this view (along with my colleague, Steve Williamson) discusses the idea here. Visually, the proposition asserts something like this: 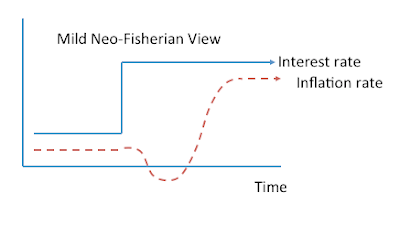 Of course, the conventional view is that raising the policy interest rate will cause inflation to go down, not up. The idea that the opposite might be true is evidently something to be ridiculed.


I can't help but think that Pettifor's view on the proposition was formed without first trying to understand it's underlying logic (but I could be wrong). Also note that the proposition is not inconsistent a higher interest rate leading to lower inflation in the short-run.

Why do people generally feel uncomfortable with the Neo-Fisherian proposition? I think that fellow Canuck Grep Ip of the WSJ gets at one reason here where he writes:


Neo-Fisherism has theoretical elegance but lacks intuitive logic. At its heart, neo-Fisherism says there is, somewhere, a fixed real rate that drives what the public expects inflation to be. Yet few people–even those who know what real rates are–have a firm view of what they should be. Their expectations of inflation are more likely to depend on past inflation, central bank or private forecasts, and the state of the economy. These expectations of inflation will then drive the returns they expect on saving and investment, not vice-versa.

The uncomfortable part is that despite this apparent lack of intuition underlying the proposition, it appears consistent with recent experience: 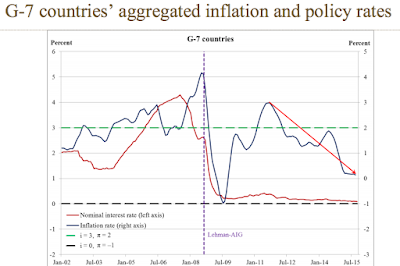 However, in a recent column, David Beckworth questions whether the proposition is consistent with what is happening in Japan. This led me to ask him:

@dandolfa The one that says raising interest rates is necessary to raise inflation. This is being violated in Japan. pic.twitter.com/vrOiJV6uUh
— David Beckworth (@DavidBeckworth) December 15, 2015


Now, it might seem strange to some of you that I asked him which Neo-Fisherian theory he was referring to, but I did so because there seem to be two different strains. But before I get to that, it's worth emphasizing that the proposition does not state that raising interest rates is necessary to raise inflation. (I stated the proposition above, go read it again if you have to.)

The first strain of the theory seems to rely entirely on rational expectations and the Fisher equation (without any reference to central bank balance sheets or the conduct of fiscal policy). The way this thinking goes is that the Fisher equation is just a no-arbitrage-condition. (No-arbitrage-conditions are compelling economic restrictions because if they did not hold, traders could make infinite riskless profits.) If a central bank raises the nominal interest rate, then for a given real rate of interest, the expected inflation rate must rise (else traders will be making infinite profits). This seems to be the interpretation favored by Stephanie Schmitt-Grohe and Martin Uribe (see my discussion here).

Personally, I am not sold on this interpretation. I prefer the second strain of the theory, which is related more to the fiscal theory of the price-level (as the name suggests, the theory emphasizes the role of fiscal policy in helping to determine inflation).  According to this interpretation, the proposition that "a persistent policy-induced increase in short-term nominal interest rates will lead to higher inflation in the long-run" must be qualified with the condition that the fiscal authority passively accommodate the monetary authority's policy decision (see my column here: A Dirty Little Secret.)

Intuitively, think of the following thought experiment. The Fed raises its policy rate and its widely expected to remain at this elevated level for the foreseeable future. The effect of this policy is to increase the carrying cost of debt for the government. Assume that the government services this higher debt burden not by cutting expenditures or increasing taxes, but by increasing the rate of growth of its nominal debt. Essentially, the government is printing "money" to finance interest payments on its debt. Then (assuming a constant long-run money-to-debt ratio) the money supply must start growing at this higher rate. Suppose that people generally understand this (a big supposition, I know). Then, people should revise their inflation expectations upward (and actual inflation should result, not because of inflation expectations, but because the monetary and fiscal authorities are printing nominal liabilities at a more rapid pace to finance the higher interest cost).

I'm pretty sure that David and others understand the proposition when it is framed in this manner. Whether this is what actually transpires is, of course, anybody's guess (consider this case study for Brazil 1975-1985). It's really  hard to forecast precisely how the fiscal authority (Congress) might react to higher interest rates. I do find it interesting, however, that fellow Twitterer Matt Yglesias noticed the following:

Impressive how quickly congress has stopped caring about the deficit even as the end of ZIRP means it actually might make sense to care.
— Matthew Yglesias (@mattyglesias) December 16, 2015


Impressive indeed. But if interest rates on U.S. treasury debt continue to rise, the debt-service problem will make the headlines soon enough. The debate will then turn to whether the U.S. should cut G and increase T (austerity) or permit more rapid debt expansion (and inflation).
Posted by David Andolfatto at 3:32 PM