Lift off in a world of excess reserves 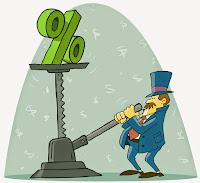 Back in the good ol' days, U.S. depository institutions (mostly banks) held just enough cash reserves (deposits they held at the Fed) to meet their settlement needs. At the end of the day, a bank short of reserves could borrow them from a bank with excess reserves. These trades would occur on the so-called federal funds market and the interest rate agreed upon on these (unsecured) overnight loans is called the federal funds rate (FFR). In fact, there was (and is) no such thing as "the" FFR because these trades did not (and do not) occur in a centralized market at a single price. Trades in the FF market occur in decentralized over-the-counter markets, with the terms of trade (interest rates) varying widely across transactions (see figure 12 here). "The" FFR we see reported is sometimes called the effective FFR. The effective FFR is just a weighted average of reported interest rates negotiated in the federal funds market.

For better or worse, the FFR was (and still remains) the Fed's target interest rate. Prior to 2008, the Fed (actually, the FOMC) would choose a FFR target rate and then instruct the open markets trading desk at the New York Fed to engage in open market operations (purchases and sales of short-term Treasury debt) to hit the target. To raise the FFR, the trading desk would sell bonds, to lower it, they would buy bonds. (Evidently, even the mere "threat" of buying and selling bonds following an FOMC policy rate announcement often seemed sufficient to move the market FFR close to target.) The way this worked was as follows. A sale of bonds would drain reserves from the banking system, compelling banks short of cash in the FFR market to bid up the FFR rate. A purchase of bonds would induce the opposite effect. The system worked because banks were compelled to economize as much as they prudently could on their reserve balances. Prior to 2008, the Fed was legally prohibited from paying interest on reserves (IOR).

But the world is now changed. In 2008, the Fed started paying a positive IOR (25 basis points). And it started buying large quantities of U.S. treasury and agency debt. The Fed funded these purchases with interest-bearing reserves. It may seem like a strange thing to do, but from a banker's perspective it looks brilliant. Imagine buying a risk-free asset yielding 2-3% and funding the purchase by borrowing at 1/4%. The profit the Fed makes on this spread is mostly remitted to the U.S. treasury (i.e., the taxpayer). In 2014, the Fed remitted close to $100B.

Well, not quite dead. There are still a few trades, motivated  primarily by the fact that some key participants in the FF market (GSEs) are legally prohibited from earning IOR. The Federal Home Loan Banks, in particular, have a large supply of funds that, if they could, would happily hold these deposits at the Fed earning 25bp. Instead, they must hold these funds with DIs, who are able to earn IOR (see here). Because short-term treasury debt is yielding close to zero, the effective FFR negotiated between DIs and non-DIs lies somewhere between zero and IOR (see following graph). According to Afonso and Lagos (2014),  the volume of trade in the FF market has dropped to about $40B per day from its peak of $150B per day prior to 2008 (see their figure 4). 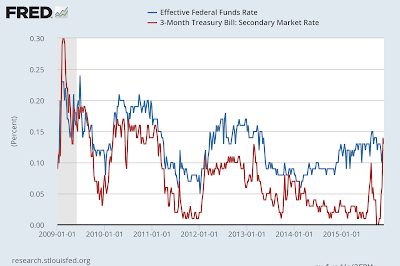 Alright, so where are we at? Since 2008, the Fed has congressional authority to pay IOR (to DIs only). The Fed can clearly set IOR where ever it wants (within limits). So when lift off date arrives, raising IOR by (say) 25bp will pose no problem from an operational viewpoint.

The Fed, however, has elected to keep the FFR--not the IOR--as "the" policy rate. Given this choice, there is the question of how the Fed expects to influence the FFR when there is no (or very little) FF market left in this world of excess reserves. Theoretically, IOR should serve as a floor for the FFR. But evidently there are "balance sheet costs" and other frictions that prevent arbitrage from working its magic. So the problem (for the Fed) is how to guarantee that its policy rate--the FFR--will lift off along with an increase in IOR.

Enter the Fed's new policy tool -- the overnight reverse repo (ON RRP) facility, overseen by Simon Potter of the NY Fed. Actually, the tool is not exactly new. The Fed has historically used repos and reverse repos for a long time; see the following graph. 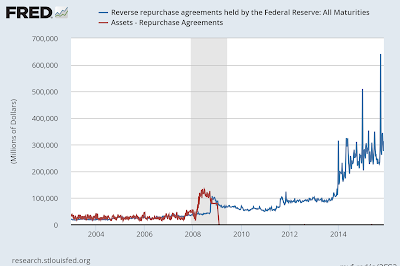 What's new about the ON RRP facility is that it is open to an expanded set of counterparties (beyond the regular set of DIs). The NY Fed publishes a list of these counterparties here. It is notable that GSEs and MMMFs are including in this list.

Lift-off (an announced increase in the FFR target rate or band) will then be accompanied by an increase in the IOR to (say) 50bp together with an ON RRP rate of (say) 25bp. The hope is for the effective FFR to trade somewhere within this interest rate band. Theoretically, the ON RRP rate should provide an effective floor for the FFR--assuming that the facility is conducted on a full allotment basis (i.e., assuming that the facility is not capped in some manner). If the facility is capped, and if the cap binds, then we may observe trades in the FF market occurring at rates lower than the ON RRP rate. This latter scenario is obviously one that the Fed would like to avoid.

There is also the question of whether other market interest rates will follow the FFR upward in the present environment. Some economists, like Manmohan Singh of the IMF worry that the Fed is using the wrong tool for lift off (see his piece in the Financial Times here). Singh would prefer outright asset sales because the treasuries released in the market can then be left to circulate (via re-use and rehypothecation) to relieve an ongoing asset shortage. (The securities released by the Fed in its ON RRP facility are evidently not expected to circulate.) It is conceivable, though perhaps unlikely, that the yield on short-term treasuries remains close to zero (reflecting a stubborn liquidity premium) even as the FFR is increased. As always, it will be interesting to see what actually transpires.
Posted by David Andolfatto at 12:35 PM