Money and Payments, or How we Move Marbles.

I'm writing this to serve as background for my next post on Fedcoin. If you haven't thought much about the money and payments system, I hope you'll find this a useful primer explaining some basic principles. 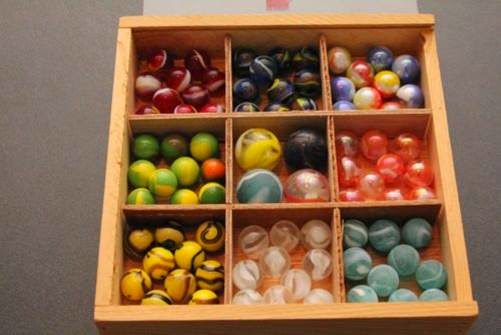 One way to visualize the money and payments system is as a compartmentalized box of marbles, displayed to the right. The marbles represent agreed-upon monetary tokens--record-keeping devices (see also the discussion here). The compartments represent individual accounts. Paying for a good or service corresponds to moving marbles from one account to another.

A good marble should have easily recognizable and understandable properties. This is one reason why complicated securities make poor money. Fiat money and senior claims to fiat money make good money along this dimension because everyone knows that fiat money is a claim to nothing (so there is no asymmetric information, a property emphasized by  Gorton and Pennaccchi, 1990). Gold, even if it is coined, is not especially good along this dimension because it is heterogeneous in quality (and it's not costless to have it assayed, see here). Plus, precious-metal coins can be shaved (although, there is no motivation to shave token coins).

A good marble should also be durable, divisible, and difficult to counterfeit. Paper money issued in different denominations can have these properties. And while virtual money can easily be made durable and divisible, it is extremely easy to counterfeit. For this reason, trusted intermediaries are needed to create and manage a virtual money supply (at least, up to the invention of Bitcoin). Gold (and other precious metals) have these desired properties. But to the extent that these metals have competing uses, it is inefficient to have them serve as accounting marbles. Unless you don't trust the intermediaries that manage the fiat-marble supply, that is. (Unfortunately, there have been enough failed experiments along this dimension to warrant some skepticism.)

How should the supply of marbles be managed over time? Advocates of the gold standard want the supply to be determined by the market sector (through mining). This protocol means that the supply of money is essentially fixed over short periods of time, and grows relatively slowly over long periods of time (although, big new discoveries have often led to inflationary episodes). If the demand for money increases suddenly and dramatically (as it is prone to do during a financial crisis), then the consequence of a fixed short-run supply of money is a sudden and unanticipated deflation. Because nominal debt obligations are not typically indexed to the price-level, the effect of this protocol is to make a recession larger than it otherwise might be. The idea behind a central bank as lender-of-last resort is to have an agency that can temporarily increase the supply of money (in exchange for "excessively" discounted private paper) to meet the elevated demand for money so as to stabilize the price-level. In effect, such a policy, if executed correctly, can replace the missing state-contingency in nominal debt contracts. Whether a central bank can be trusted to manage such a policy in responsible and competent manner is, of course, another question. Let's just say that there are costs and benefits to either approach and that reasonable people can reasonably disagree.

Apart from cyclical adjustments the money supply, there is the question of whether money-printing should ever be used to finance operating expenditure (seigniorage). Generally, the answer is "yes"--at least, once again, if it is done responsibly. It is of some interest to note that the Bitcoin protocol uses seigniorage to finance payment processors (miners). The idea here, I suppose, is that the protocol, which is a computer program and not a politician--can be trusted to manage the inflation-tax optimally. That is, at least for a limited amount of time--the long-run supply of bitcoin is presently capped at 21M units.

Alright, so how about the payments system. What are the different ways of rearranging marbles in a ledger?

The most basic method of payment is the combination of a physical cash exchanged in a P2P meeting. When I buy my Starbucks latte, I debit my wallet of cash and Starbucks credits its cash register by the same amount. The ledger that describes the distribution of physical cash holdings (and the histories of how each unit of cash has moved across accounts over time) is hidden from all of us. This is why cash transactions are associated with a degree of anonymity.

Another popular way to make a payment is via a debit card. In this case, Starbucks and I have accounts in a ledger that is managed by the banking system. These accounts are stocked with virtual book-entry objects. When I pay for my latte with a debit card, I  send a message to the banking system asking it to debit my account and credit the merchant's account. In this protocol, the banking system verifies that I have sufficient account balances and executes the funds transfer. The protocol obviously relies on the use trusted intermediaries to manage the ledger and keep it secure. Also, because bank accounts are associated with individual identities and because centralized ledger transactions can be recorded, there is no anonymity associated with the use of this payments protocol.

The Bitcoin protocol is an amazing invention--I'm on record as describing it as a stroke of genius. The amazing part of it is not it's monetary policy (which I think is flawed). Its main contribution is to permit P2P payments in digital cash without the use of a centralized ledger managed by a trusted intermediary. (In fact, the economic implications of this invention extend far beyond payments; see Ethereum, for example).

What makes digital cash without an intermediary so difficult? Think of digital cash as a computer file that reads "one dollar, SN 24030283." Suppose I want to email this digital file to you in payment for services rendered. When I take a dollar bill out of my pocket and send it to the merchant, there is no question of that dollar bill leaving my pocket. For the same thing to be true of my digital dollar, I would be required to destroy my computer file "one dollar, SN 24030383" after sending it to the merchant. The problem is that  people are likely to make endless copies of their digital money files. In other words, digital money can be costlessly counterfeited. And this is why we make use of intermediaries to handle payments in a virtual ledger. (We don't expect the intermediaries to counterfeit our balances...our main complaint with them is that they charge too much for their accounting services!)

There is no need to get too far into the details of how the Bitcoin protocol manages this feat. If you are interested, you can consult this book by the inspirational Andreas Antonopoulos. The main idea behind the protocol is a distributed public ledger (called the block chain) that is updated and made secure through the collective efforts of decentralized payment processors (called miners). I find it interesting how the Bitcoin consensus mechanism resembles, in spirit at least, the communal record-keeping practices of ancient gift-giving societies. In a gift-giving society, who contributes what to the collective good is recorded on a distributed network of brains. This is easy to do in small societies because there's not much to keep track of and verbal communication is sufficient to keep all nodes updated.

I want to end with a a couple of notes. First, isn't it interesting to note the coexistence of so many different monies and payments systems? Even today, a great deal of economic activity among small social networks (family, close friends, etc.) continues to be supported by gift-giving principles (including the threat of ostracism for bad behavior). This coexistence is likely to remain going forward and I think that open competition is probably the best way for society to determine the optimal mix.

It is also interesting to note that almost every money and payments system requires some degree of trust. This is also true of Bitcoin. In particular, the vast majority of Bitcoin users cannot read C++ and even for those that can, most are not about to go and check all 30MB (or so) of the Bitcoin source code. Nor will most people know what to do with a 30GB (and growing) block chain. Core developers? Mining coalitions? Who are these agents and why should they be trusted? The protocol cannot be changed...really? It won't be changed...really? It's just software, my friend. There's no guarantee that a consensus will not form in the future to alter the program in a materially significant way that some users will not desire. The same holds true for any consensus protocol, including the Federal Reserve Act of 1913 and the U.S. Constitution.

In my view, people will come to trust Bitcoin (or not) depending on its historical performance as a money and payments system. This is perfectly natural. It is not necessary, for example, that a person learns precisely how an internal combustion engine works before operating a motor vehicle. Most people drive cars because our experiences and observations tell  us we can trust them to work. And so it is with money and payments systems.

For an excellent explanation of the modern payment system, see here: A Simple Explanation of How Money Moves Around the Banking System, by Richard Gendal Brown.

Posted by David Andolfatto at 3:35 PM