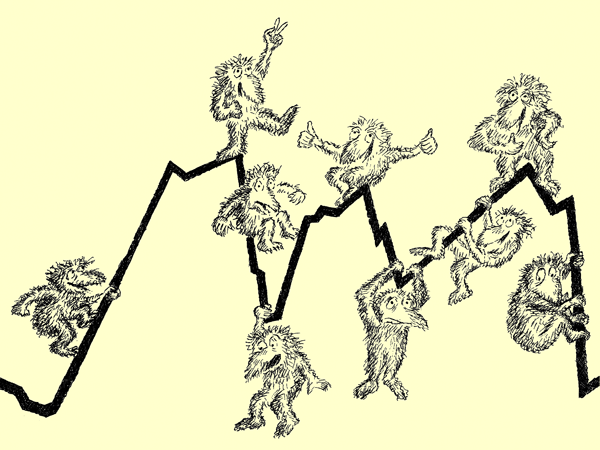 Noah Smith has a nice piece here on Roger Farmer's view of the business cycle.

The basic idea is that, absent intervention, economic slumps (as measured, say, by an elevated rate of unemployment) can persist for a very long time owing to a self-reinforcing feedback effect. The economy can get stuck in what game theorists would label a "bad equilibrium." This interpretation seems to me to be highly consistent with Keynes' (1936) own view on the matter as expressed in this passage:


[I]t is an outstanding characteristic of the economic system in which we live that, whilst it is subject to severe fluctuations in respect of output and employment, it is not violently unstable. Indeed it seems capable of remaining in a chronic condition of subnormal activity for a considerable period without any marked tendency either towards recovery or towards complete collapse.

Now, there is more than one way to explain how an economy can get stuck in a rut. A favorite argument on the right is that recessions are naturally self-correcting if the market is left to its own devices and that prolonged slumps are attributable primarily to the misguided, clumsy and uninformed attempts on the part of government policymakers to "fix" the problem (see here).

But there is another view. The view begins with an observation from game theory: most structures that govern social interaction permit many possible outcomes--outcomes that have nothing to do with the existence of any fundamental uncertainty. If we think of the macroeconomy as a collection of individuals interacting in a large "market game," then the same principle holds--we shouldn't be surprised to discover that many equilibrium outcomes are possible. This idea forms the basis of Roger's pioneering book: The Macroeconomics of Self-Fulfilling Prophecies.

According to Noah, "[Farmer's] approach is mathematically sophisticated, and uses the complex modern techniques that are ubiquitous in academic literature." While this is certainly true, I think there is an easy way to teach the basic idea using standard undergraduate teaching tools. In what follows, I assume that the reader has some knowledge of indifference curves, budget sets, and production possibilities frontiers.

The framework is the basic static "income-leisure" model. A representative household has a fixed unit of time that can be devoted to one of two uses: market work or home work. The household values the consumption of two goods: a market-produced good and a home-produced good. An individual household takes the return to market work as exogenous. If the (expected) return to market work fluctuates randomly over time owing to (say) productivity shocks, tax shocks, news shocks, etc., then the choices that households make can be depicted with the following diagram: 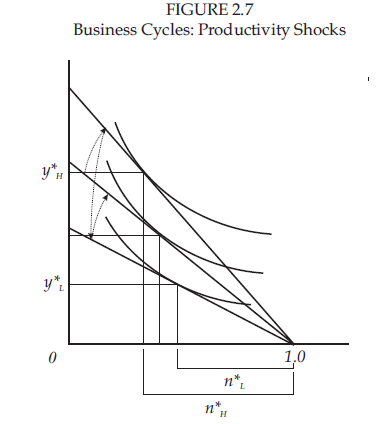 In the diagram above, the x-axis measures time devoted to home work (so that the distance n* is a measure of employment) and the y-axis measures output (real income). The straight lines correspond to the household's budget set (which corresponds to the production possibilities frontier for a linear technology). The curved lines represent indifference curves--how the household values the market and home goods. This is, in essence, the RBC theory of the business cycle: as the returns to economic activities vary over time, people rationally substitute into higher return activities and out of lower return activities. If these shocks are correlated across households, then in the aggregate we observe cyclical fluctuations in output and employment.

Is it possible to model Roger's world view using the same apparatus? Yes, it is. One way to do this is to imagine a fixed production possibilities frontier that exhibits increasing returns to scale. The basic idea is that the return to labor (more generally, any economic activity) is higher when everyone is working hard and vice-versa. The following diagram formalizes this idea. 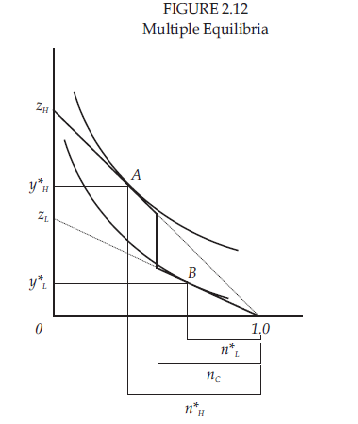 The RBC view is that there are two separate production functions shifting up and down (with the y-intercept moving between z_H and z_L. But suppose that the production function is in fact stable and that it takes the shape as traced by the solid kinked line connecting z_H to 1.0. The kink occurs at some critical level of employment labeled n_C. The individual's return to labor is expected to be high IF he expects aggregate employment to exceed n_C. Conversely, the individual's expected return to labor is low IF he expects aggregate employment to fall short of n_C.

Given this setup, whether the economy ends up at point A (the high-level equilibrium) or at point B (the low-level equilibrium) depends entirely on "animal spirits." That is, if the community as whole expects B then it is individually rational to choose B which, if done en masse, confirms the initial expectation. Likewise for point A. The allocations and prices associated with points A and B constitute self-fulfilling prophecies.

It is interesting to note that these two very different hypotheses can generate output and employment fluctuations that are observationally equivalent. How would the poor econometrician, uninformed of the true structure of the economy, distinguish between these two competing hypotheses? They both generate procyclical employment, productivity and wages. And if a slump lasts for an unusually long time well, RBC theory can claim that's just because people are rationally expecting a large future penalty (tax) on their employment activities (or, in the context of a search model, their recruiting investments). And if the economy oscillates randomly between A and B at high frequency, the Keynesian theory can claim that this behavior is a part of a "sunspot" equilibrium where fluctuations are driven by "animal spirits."

This observational equivalence problem is unfortunate because the two hypotheses have very different policy implications. The first interpretation more or less supports a laissez-faire approach, while the second interpretation suggests a fruitful role for a well-designed fiscal policy (in this model, even the credible threat of employing idle workers can keep the economy at point A without any actual intervention).

PS. I lifted these diagrams from my free online macro lecture notes, available here. (Warning: the notes are in desperate need of correction and updating. I'll get to it one day.)

Posted by David Andolfatto at 11:29 AM