So Japan is in recession.  And it's all so unexpected. Ring the alarm bells!

Well, hold on for a moment. Take a look at the following diagram, which tracks the Japanese real GDP per capita since 1995 (normalized to equal 100 in that year). I also decompose the GDP into its expenditure components: private consumption, government consumption, private investment, and government investment (I ignore net exports). The GDP numbers go up to the 3rd quarter, the other series go up to only the 2nd quarter. 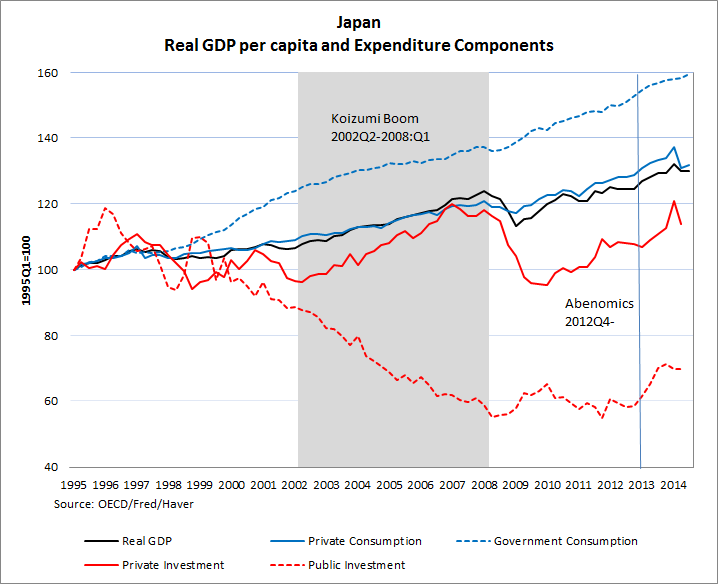 In terms of what we should have expected, I think it's fair to say that most economists would have predicted the qualitative nature of the observed dynamic in response to an anticipated tax hike. That is, we'd expect people to substitute economic activity intertemporally--front loading activity ahead of the tax hike, then curtailing it just after. And qualitatively, that's exactly what we see in the graph above. But does the drop off in real per capita GDP really deserve all the attention it's getting? I don't think so. The fact that the economy was a little weaker in the 3rd quarter than expected (the two consecutive quarters of GDP contraction is what justified labeling the event a "recession") is not really something to justify wringing one's hand over. Not yet, at least.