Another look at the Koizumi boom

In my previous post, I reported on the remarkably different trajectories that consumption and investment have taken in Japan since the Asian financial crisis. Consumption has boomed at the expense of investment.
The aggregate investment series I reported earlier included both private and government investment expenditure. The government component of investment in Japan is sizeable. In 1980, it comprised over 30% of gross fixed capital formation. (It's relative size has diminished since then.)

But as Mark Sadowski has pointed out to me, private and public investment in Japan have behaved quite differently over the past couple of decades. I want to explore this property of the data in a little more detail today.

In case you missed it, the Japanese economy experienced a sort of "boom" that roughly corresponded with the time Koizumi was prime minister of Japan. Here is a plot of real GDP in Japan from 1980 to present: 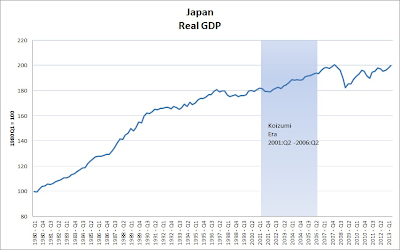 OK, so it wasn't much of a boom relative to what Japan experienced in the 1980s, but it's definitely there.

The boom started shortly after Koizumi took office and lasted for a couple of years after he left -- up until the 2008 crisis. What factors were responsible for this period of relative prosperity? Noah Smith, in a very fine post that I encourage you to read, argues that the episode constitutes a bit of a macroeconomic puzzle.

Keiichiro Kobayashi argues that the root of Japan's lacklustre performance prior to the Koizumi boom was the bad debt problem. The bad debt problem was finally dealt with by two government-backed agencies -- the Resolution and Collection Corp. (RCC) and the Industrial Revitalization Corp. of Japan (IRCJ) -- which were established to dispose of soured loans and restructure troubled corporate borrowers. Kobayashi, who was writing in 2009, also warned against "wishful thinking" on fiscal stimulus.

This latter remark drew the attention of Paul Krugman here. According to Krugman, the Koizumi boom was nothing special--it was driven by an export boom. And, of course, in a world recession, one cannot export one's way out of trouble...unless. In any case, I think Krugman is wrong in his assertion. Take a look at the first figure here. Yes, it is true that exports boomed--but so did imports. And the last time I checked, only net exports constitute contributions to GDP.


But it’s true that I’m a bit puzzled by the attribution of Japan’s recovery to bank reform. If the bank-reform story were central, you’d expect to see some “signature” in the data — in particular, I’d expect to see an investment-led boom as firms found themselves able to borrow again. That’s not at all what one actually sees.


The reason Krugman does not see the signature investment boom in the data is the same reason I did not see it in my earlier post, where I obscured the boom by lumping private and government investment together. The following figure shows a rather robust boom in private investment during the Koizumi era: 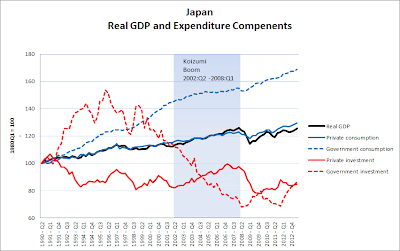 It is interesting to note that this boom took place despite the era of "fiscal austerity" over the Koizumi boom period. In particular, note the significant reduction in public sector investment and the noticeable slowdown in the growth of public sector consumption during that episode. I might add that the boom took place despite the moderate deflation  (and relatively slow growth in nominal GDP).

Moreover, the evidence does point to a resolution of Japan's bad debt problem over this period; see here: 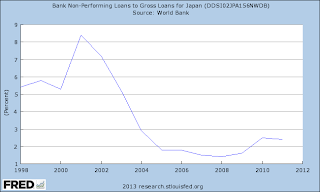 What role did Koizumi's administration have to play in this? Read this press statement, dated September 27, 2001: Bad Loans Gone by 2004: Koizumi. Remarkable.

Addressing the bad loan problem was only a small (but important) part of the "structural reforms" implemented by the Koizumi administration; see here. Among other reforms listed here include significant cuts to public investment. Note that these cuts were presumably motivated by the belief that public investment had gone too far -- this is arguably not the right policy now in the U.S. where public investment seems to have been underfunded in recent years. Nevertheless, the experiment shows that "austerity" does not necessarily induce economic contraction and, indeed, may be consistent with helping to foster an economic boom.

PS. For academic economists, I came across this interesting paper explaining how government delay in resolving a debt crisis can prolong a slump: Nonperforming Loans, Prospective Bailouts, and Japan's Slowdown, by Levon Barseghyan.

Posted by David Andolfatto at 10:12 AM