I've long been interested in the apparent cyclical asymmetry in business fluctuations. So it's nice to see Paul Krugman publicize the issue here: On the Asymmetry of Booms and Slumps. His post, in turn, was motivated this one, by Antonio Fatas: Four Missing Ingredients in Macroeconomic Models. Fatas writes:


1. The business cycle is not symmetric. Most macroeconomic models start with the idea that fluctuations are caused by a succession of events that are both positive and negative (on average they are equal to zero). Not only this is a wrong representation of economic shocks but it also leads to the perception that stabilization policy cannot do much. Interestingly, it was Milton Friedman who put forward the "plucking" model of business cycles as an alternative to the notion that fluctuations are symmetric. In Friedman's model output can only be below potential or maximum. If we were to rely on asymmetric models of the business cycle, our views on potential output and the natural rate of unemployment would be radically different. We would not be rewriting history to claim that in 2007 GDP was above potential in most OECD economies and we would not be arguing that the natural unemployment rate in Souther Europe is very close to its actual.

Let me dissect the passage above.

1. "The business cycle is not symmetric." Agreed.
2. "Most macro models assume a symmetric impulse mechanism." Agreed.
3. "Not only is this a wrong representations of economic shocks..."

Not sure what to make of this claim. I think it's alright to assume that the shocks are symmetric (unless there is compelling evidence to suggest otherwise). The asymmetry in question is more likely to be the byproduct of human interaction -- the economy's propagation mechanism.

4. "...but it also leads to the perception that stabilization policy cannot do much."

I'm also not sure what to make of this statement. We probably can't infer much about the desirability of policy interventions solely on the basis of the statistical properties of time-series data. And in any case, there are plenty of symmetric models suggesting beneficial policy interventions.

5. "If we were to rely on asymmetric models of the business cycle, our views on potential output and the NRU would be radically different."

Presumably, he means that our views would be more in line with Milton Friedman's plucking model.

6. "We would not be rewriting history to claim that in 2007 GDP was above potential..."

I often hear people make this claim. Sometimes, they are the same people who claim that the last recession was caused by a bursting asset-price bubble -- of an overheated real estate sector -- of a booming construction (and related) sectors--and over-accumulated debt. According to Larry Summers, this was all needed to get the economy to potential (in this era of secular stagnation).

In any case, on to Krugman's pet idea that asymmetry is explained by DNWR (downward nominal wage rigidity). Maybe there's something to this idea, but my own view is that any such effect is not likely to be very important. Why is this?

I've explained why before here, but let me summarize the argument here. I claim that economists who rely on sticky wage theories are unwitting slaves of Marshall's scissors--static supply and demand curves. If unemployment exists, it must be because reality does not correspond with scissor-intersection: markets do not clear.

But Marshall's scissors are meant to describe what happens in an anonymous spot market for goods like wheat or oil. The labor market is a market for relationships. Relationships are durable. Relationships are a form of capital. We have to move away from Marshall's scissors to understand these relationships (search theory is one way to do this). The economic surplus generated by a productive relationship is divided through a bilateral or multilateral bargaining process that specifies (among other things) how wages are to evolve through time over the life of the relationship. The spot wage (the wage that an econometrician might observe in a data set) plays no allocative role in the relationship. Stickiness in the spot wage does not matter.

That's the theory, anyway. But then, there is also some evidence: Evaluating the Economic Significance of Downward Nominal Wage Rigidity (Michael Elsby) and here: The Effect of Implicit Contracts on the Movement of Wages over the Business Cycle (Beaudry and DiNardo).

Well then, if not a nominal rigidity, what might account for the asymmetry in the unemployment rate? 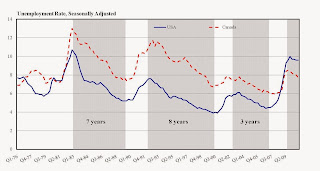 As it turns out, the sharp rise in unemployment followed by a slow decline follows as a natural property of labor market search models, something that I showed here (the example I alluded to above).

PS. Some related papers where a shock destroys (reshuffles) match capital and takes time to recover: Adaptive Capital, Information Depreciation, and Schumpeterian Growth (Jones and Newman) and Distributional Dynamics Following a Technological Revolution (Andolfatto and Smith).
Posted by David Andolfatto at 10:02 AM