In gold we trust?

I've written before that a desirable property of a monetary instrument is for it to hold its value over short periods of time (See: Why Gold and Bitcoin Make Lousy Money).

In other words, a good monetary instrument should have a stable short-run rate of return. If I earn some money today, I don't want to see its value decline by 50% tomorrow. If I spend a dollar today, I don't want to see its value rise by 50% tomorrow. Even if these fluctuations cancelled out in the long run, it would be terribly inconvenient and annoying. I'd rather live in a world where my money lost value at a slow but steady rate. Of course, I would not want to store my wealth in the form of such an instrument. But that's not how we store wealth anyway. To store wealth, we can always sell the money we do not need for transaction purposes and purchase other securities. 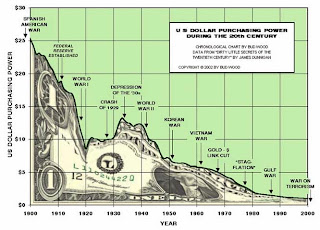 I've written about this before here: Ron Paul's Money Illusion.

We know that over very long horizons, the rate of return on gold exceeds that of money. But all this says is that gold is a better store of value than cash over long periods of time. (I discuss here whether gold is a good store of value relative to other assets.). How has the purchasing power of gold held up over the last little while?

Here is the purchasing power of gold vs the USD since the beginning of the year: 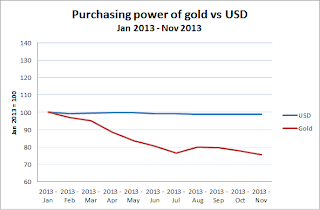 OK, so this past year was not a good one for gold. If you had earned your wages in gold at the beginning of the year, that gold would now buy you 25% less bread. That's like a tax. And it was not the Fed doing it to you. In fact, if you had instead held on to your USD over same period of time, you would have experienced a much smaller decline in purchasing power.

What if we look at the past 2 years? Here is the picture: 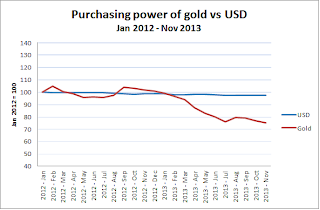 What we see from the picture above is that the purchasing power of gold held up with that of the USD in 2012, but that its short-run rate of return was more volatile. It's rate of return then fell down a  steep hill in 2013. 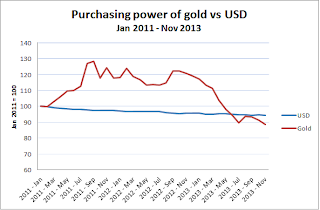 Gold can't even beat the rate of return on cash over a three-year horizon? That's pretty sad for a store of value.

The main lesson I take away from this is not that people shouldn't invest in gold. By all means, go ahead and invest in all sorts of stuff, including gold. The main lesson is that commodity prices tend to be highly volatile over short periods of time and that this short-run volatility makes them undesirable as payment instruments. There is a better alternative available, and the United States has it in the form of the Federal Reserve.

And a Merry Christmas to all.

PS. My colleague Christian Zimmermann points me to this potentially interesting paper: The Gold Dilemma by Claude Erb and Campbell Harvey.
Posted by David Andolfatto at 12:06 PM