On the want of U.S. government debt 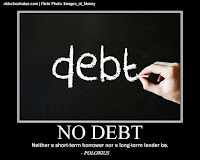 In a recent article, Narayana Kocherlakota lays out the case for why, under present conditions, the U.S. government should be issuing more debt, using the proceeds to cut taxes, finance infrastructure spending, or both. It's a policy that many economists, including yours truly, have been advocating for some time. And while I generally support the policy, I thought it would be useful, nevertheless, to reflect on some possible counterarguments. It's not a slam dunk case, one way or the other, I think.
Kocherlakota does a good job explaining why a deficit-financed tax cut, or deficit-finance infrastructure spending is a good idea. I want to make it clear that the argument in favor of the policy hinges critically on the presumption that we can rely on Congress to manage the public debt over time in a responsible manner. Let's accept this assumption, provisionally at least, in order to understand the economic argument. I will come back to the political argument later.

While the debt-to-GDP ratio (D/Y) is presently high by historical standards, it's not unmanageable. The key is not the D/Y itself, but its trajectory over time. Clearly, D/Y cannot grow forever. And fortunately, market signals are available to monitor how the public perceives the likely path for D/Y over time. These market signals are: (1) the yields on U.S. treasury debt (at various maturities), and (2) inflation and inflation expectations. So what are these market signals telling us? The yield on U.S. treasuries is presently very low. Both inflation and inflation expectations are presently running below the Fed's 2% target and have done so for years now. So far, so good.

The large increase in D/Y since 2008 together with plummeting yields and low inflation may seem puzzling, but it's not really. Usually, a bad event that triggers a large increase in the public debt also triggers higher bond yields and the prospect of inflation. We can expect this to be the case in any experiment where the supply of debt increases in the face of a stable (or diminished) demand for the debt that is being issued. Think Zimbabwe or Venezuela.

But the U.S. is not Zimbabwe or Venezuela, or the Weimar Republic, for that matter. Rightly or wrongly, the U.S. treasury security is viewed by investors around the world as a safe haven asset. So when the financial crises hit in the U.S. and Europe 2008-10, investors moved en masse into U.S. treasuries (and other sovereign debt instruments viewed to be relatively safe). In short, while the supply of U.S. debt spiked up, the demand for U.S. debt increased by even more. We can infer this from the behavior of bond yields, which went down (the price of debt went up) at the time. 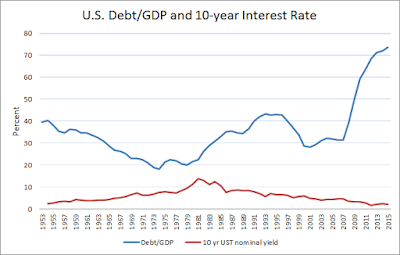 So the economic argument is simple. The U.S. government can presently borrow at essentially zero interest (more or less) even 10 years out and more. This effectively gives the fiscal authority the ability to print money (low-interest debt), so there's no need to rely on the Fed. To the extent that domestic real economic activity is still not firing on all cylinders, why not offer temporary tax cuts to stimulate demand? Why not re-build that crumbling infrastructure, putting people to work, all financed at zero-interest? It sounds like a no-brainer.

Alright, now for a couple of counterarguments, one economic and one political.

An economic argument against temporarily increasing the public debt further (and indeed, taking measures to reduce it) could be made on the basis of the Triffin Dilemma. The economist Robert Triffin noted back in the early 1960s that world reserve currency/debt status is a double-edged sword. On the one hand, it's great that the U.S. can just print paper that is coveted around the globe. If foreigners are willing to export their goods and services to us, expecting only paper in return, then we are extracting wealth from the rest of the world (in exchange for what ever financial service our paper is providing them).

One implication this power, if exercised, is that the world reserve currency issuer is likely to run persistent trade deficits. Triffin worried that the huge amount of U.S. currency held by foreigners exposed the U.S. to foreign risks. What might happen, for example, if foreigners suddenly decided they no longer wanted to hold USD or USTs? This could result in a sudden and dramatic change in the exchange rate, leading to domestic inflation and sharply higher bond yields.

There is also the trade-related argument that persistent trade deficits kill domestic industries and domestic employment. After all, if we can make the rest of the world work for us in exchange for paper, where is the need for us to work at all? The implied boom in domestic leisure consumption sounds good theoretically. But of course, in reality, the gains are not evenly shared. The rich gain by purchasing cheaper foreign goods. The poor are out of their jobs.

A political argument against more government debt could be made by challenging the assumption that it will be managed responsibly. This "we can't trust future politicians to do the right thing" argument is (sadly) not without empirical merit. I am reminded of the following quip by P.J. O'Rourke,

I can't help but note a certain irony here. There seems to be a strong presumption among people (Americans in particular) that the government should run its finances in the manner of a household. Economic theory is quite clear that this sentiment, however noble, is just plain wrong. The irony is that to the extent that this sentiment finds its way to being represented in Congress, it proves to be a very valuable "anchoring" device for the fiscal authority.

That is, I sometimes wonder whether US treasury debt is valued around the world the way it is precisely because it is known that Congress is impregnated with a large number of genetic "debt-ceiling" algorithms. It may not be an ideal situation from the perspective of pure economic theory, but then again, it's not hard to think of worse scenarios.
Posted by David Andolfatto at 10:11 AM