Nick Rowe has a nice post (written some time ago) that frames an old macroeconomic issue in a very nice (teachable) way.

In macro policy discussions, one often hears something like "lower interest rates stimulate aggregate demand.'' Many people view such a statement as self-evident. It's only when you think about it for a long time that you realize it's not self-evident at all (few things are when we are left to ponder them long enough, it seems).

The purpose of this post is to add a bit of formalism to Nick's discussion. (Sorry for the wonkish display, but I think it's necessary at this point to make things clear.) To this end, let's begin with an off-the-shelf bare-bones macro model. There is a representative agent (this is not necessary, but makes things easy) with additively-separable log preferences defined over consumption sequences {c(t), t = 0,1,...,∞}, with discount factor 0 < β < 1. Let R(t) denote the gross real rate of interest (risk-free) earned on a bond held from date t to date t+1. Assume that all individuals can borrow/lend freely at the risk-free rate.

One can do a lot with the Euler equation. Here is how it is used to derive "aggregate demand." First, assume that all output is (for simplicity) in the form of nonstorable consumer goods and services. Let N denote population size. Then C(t) = Nc(t) denotes aggregate consumption or GDE (gross domestic expenditure). Now rearrange [1] as follows,

Thus, if we hold c(t+1) fixed, then equation [2] traces out a negative relationship between c(t) and R(t). That is, an increase in R(t) results in a decrease in planned present day consumer spending (aggregate demand). This negatively related locus of consumption and interest rate pairs is sometimes called an IS curve (IS = "investment-saving" where investment is fixed at zero in this model). The economic intuition is simple: raising R(t) makes it more attractive to save (lower current consumption). [Never mind for now that any extra saving is likely to boost c(t+1).]

Let me consider an endowment economy where each individual is endowed with a deterministic sequence {y(t), t = 0,1,...,∞}. Usually, y(t) is thought of as an individual's output or income at date t, so that Y(t) = Ny(t) represents GDP (gross domestic product) or GDI (gross domestic income). But more generally (and this is what the General refers to in the General Theory) we can think of y(t) as a maximum production capacity. "Full employment" refers to the special case where Y(t) is the GDP.

The standard neoclassical assumption is that the economy is always at full employment. Maybe calling this property an assumption is not quite accurate. We can derive the property as a result of some deeper assumptions relating to the ability of individuals in an economy to coordinate their activities in an efficient and socially desirable manner (this is the force behind Says' Law, that "supply creates its own demand.") In any case, the upshot is that Y(t) represents the GDP. And since GDE = GDP, we have C(t) = Y(t), or c(t) = y(t), at every date t. Each person consumes his value-added, the economy consumes what it produces.

The real interest rate is predicted to be high when growth (α) is high. The real rate of interest is low when growth is low. The intuition here is as follows. An increase in α means that people are expecting higher levels of future income. People will want to bring some of that future income forward in time. They will try to do so by borrowing, or saving less. Either way, the effect is to put upward pressure on the interest rate.

Alright, it's time to do some "textbook" aggregate demand analysis. Actually, I don't like the way textbooks usually do this. The usual assumption is a "sticky wage" that mucks up the labor market (here is my critique on that idea). This idea is certainly not Keynesian:


"There is, therefore, no ground for the belief that a flexible wage policy is capable of maintaining a state of continuous full employment..." [General Theory, 1936 Chp. 19]

Indeed, Keynes (1936) wrote that flexible wages could make things worse, not better (consistent with my Figure 2.12 here.) The best representation of "what Keynes actually meant" is, in my view, expressed formally in the game theoretic notion of multiple Bayes-Nash equilibria (a tool that was not available to Keynes in his lifetime). See Cooper and John (1988), Howitt and McAfee (1990) and Roger Farmer for example.

How to proceed? There are many ways, but I don't want to get bogged down in the details here (although I should stress that the details are critical for other questions). One way to proceed is to embed my static high/low equilibrium model into the model above. In that model, aggregate demand C(t) can be either high or low, and the equilibrium level of output can correspond to the high or low level of demand as a self-fulfilling prophecy.

Here's another way to think about it. Peter Howitt would explain it to me this way. Imagine that the people in our model do not like the smell of their output (any reason to motivate intratemporal trade here will do). So they will want to swap their goods with others. If everything works well here (the neoclassical assumption), then all goods will be traded at par. The real GDP is Y(t).

Now, suppose that trading is costly. Suppose that it is prohibitively costly to sell any output beyond some level k(C), where C is aggregate demand. Assume that k(C) is increasing in C. The idea here is that it is easier to sell larger quantities of output when demand is high. In fact, we could just assume k(C) = C/N. Next, consider an arbitrary 0 < C/N < y. Then the most anyone can expect to sell (and buy) at a given date is c = C/N. In this model, there is a continuum of equilibria, each indexed by an expectation defined over C/N. If everyone expects a thickly traded market, it is individually rational to trade a large volume and, collectively, this is what transpires. "Animal spirits" determine which of these equilibria actually prevail.

Alright, back to Nick's point. Assume that in the "long run," the economy returns to full employment forever. For simplicity, assume that the long-run is expected to occur tomorrow. In this case, c(t+1) = y(t+1) and R(t+1) = α/β for every date t going forward. Now let's take a look at today, t = 0, using condition [2].

Assume that c(0) is determined by an animal spirit (as described above) such that c(0) < y(0). Then condition [2a] can be used to solve for the equilibrium interest rate,

And the argument makes sense IF full employment lives somewhere in the foreseeable future. Lowering the interest rate in this model has the effect of stimulating consumer demand as people try to bring future output closer to the present. But future output here is fixed at full employment. So, to the extent that lowering the real rate of interest increases C(0), the effect is felt entirely in the contemporaneous depressed period in the form of higher real GDP.

But what justifies the assumption that the economy will somehow find its way back to full employment? This is the missing piece in our conventional models.

This leads Nick to ask: what if people do not expect a return to full employment in the near future? Indeed, what if? As it turns out, there are many, many other equilibria in the model above. One such equilibrium path satisfies

That is, the economy can be permanently stuck in a "secular stagnation." Moreover, the equilibrium interest rate is exactly where it should be: it is neither too high  nor too low. Consumption and GDP are growing at rate α. It's just that the level of GDP is permanently below its full employment level.

The short answer is that it can't. In fact, it's easy to construct examples where attempting to lower the interest rate could make things worse (perhaps this is an overdose of insulin, in Kocherlakota's example).

Suppose we're in a situation described by condition [2a], for example. In that exercise, I assumed that y(1) is fixed at full employment and that c(0) is depressed. This is what justified lowering R(0) to stimulate contemporaneous consumer demand. But suppose that animal spirits keep contemporaneous consumer demand fixed, and that the effect of lowering R(0) is to reduce future consumer demand to c(1) < y(1)? There is no a priori reason to expect c(0) to do all the "equilibrating" here. And so, in this manner, the effect of low interest policy could be to cause future recessions, possibly a secular stagnation.

I think most of what I said above can be shown in a conventional 2-period economy (a current and future period). Here are some diagrams.

Consider first the neoclassical general equilibrium (full employment at both dates). Condition [1] states that the slope of the indifference curve is the same as the slope of the intertemporal budget constraint (the real rate of interest). The full employment assumption means that the equilibrium lies on the budget constraint. This is point A in the following diagram. 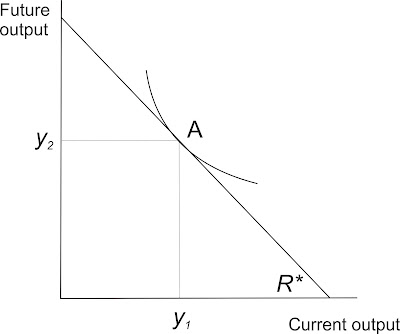 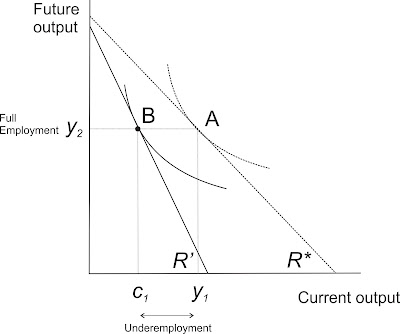 Lowering the interest rate in the diagram above (making the budget line flatter) moves the economy from B back to A. But suppose we instead forecast a future recession, so that c(2) < y(2). Then condition [5] prevails, and the economy moves to point S (secular stagnation) in the diagram below. 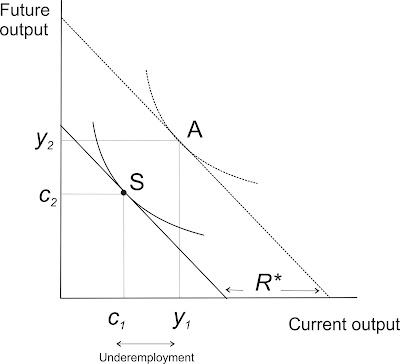 And finally, here's how to depict a future recession caused by an artificially low interest rate  policy (point F). 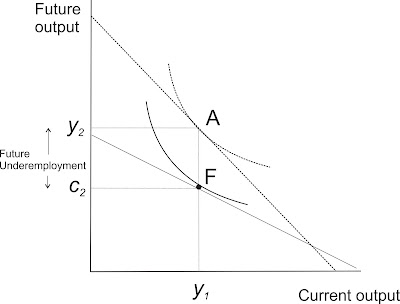