The costs of interest rate liftoff for homeowners

The results of some interesting experiments to report here from the work of my colleague Carlos Garriga and his coauthors, Roman Sustek and Finn Kydland. DA

The statement from the July meeting of the Federal Open Market Committee reveals a support for starting to increase interest rates this Fall, provided some further improvement in the labor market. Such monetary policy stance is currently held also by policy makers in the U.K., as hinted by some members of the Monetary Policy Committee, the rate-setting body of the Bank of England.

An important channel through which interest rates affect the typical household is the cost of servicing mortgage debt. Standard mortgage loans require homeowners to make nominal installments—regular interest and amortization payments—calculated so that the loan is fully repaid by the end of its term. Changes in the interest rate set by the central bank affect the size of these payments, but differently for different types of mortgage loans. In addition, the real value of these payments depends on inflation.

While mortgage contracts specify nominal installments, either fixed of adjustable, the real cost of servicing mortgage debt depends on inflation. The effects of the liftoff on homeowners will therefore depend not only on the mortgage type and the future path of interest rates but also on what happens to inflation during the liftoff.

It is instructive to illustrate the effects of the liftoff on homeowners in terms of changes in mortgage debt servicing costs (DSC)—nominal mortgage payments deflated by inflation as a fraction of household real income. This variable provides a metric of the burden of mortgage debt to homeowners as it measures the fraction of real income homeowners have to give up to meet the mortgage payment obligations of their contract. The numerical examples below illustrate these points.[3]

Figure 1 considers two alternative paths of the central bank interest rate, a slow liftoff and a fast liftoff from the current nearly zero lower bound (ZLB). In both cases, the interest rate is assumed to revert to 4 percent, the pre-2007 crisis average. In the fast liftoff case, it reaches the half-way mark of 2 percent in two years’ time, whereas in the slow liftoff case this mark is not reached until about eight years from the start of the liftoff. 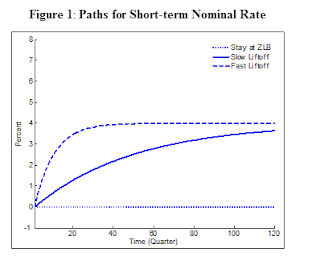 In both figures, the DSC under the various liftoff scenarios are compared with a baseline case, in which both the central bank interest rate and the inflation rate stay unchanged at zero percent (blue dotted line), approximately the current situation. In this case, DSC are about 20 percent due to the assumed lenders’ markup of three percentage points.

A liftoff without inflation 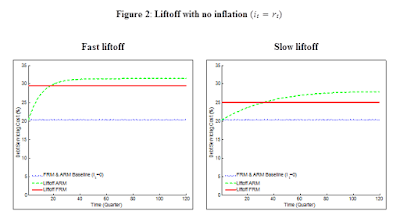 When mortgages are ARM, the liftoff affects both, existing and new homeowners. The dashed green lines plot DSC for new ARM homeowners and essentially track the paths of the central bank interest rate—DSC gradually increase from 20 percent to 32 percent under the fast liftoff and to 27.5 percent under the slow liftoff. For existing homeowners with ARM the effects depend on when the loan was originated. The more recently originated was the loan the more will the path of DSC resemble that for new loans. DSC of loans that are almost repaid will be almost immune to the liftoff. This is not only because the debt outstanding gets smaller over the life of the loan, but also because mortgage payments in later periods of the life of the loan are mostly amortization payments, rather than interest payments.

A liftoff accompanied by inflation

When the liftoff is accompanied by equivalent increase in inflation, and no change in the real rate, the impact of the liftoff on DSC is greatly attenuated (Figure 3). First, existing FRM homeowners gain from the higher inflation and these gains grow over time as persistent inflation deflates the real value of the nominal payments, which under FRM are constant. Those with the more recently originated mortgages gain the most over their homeownership tenure (the dash-dotted red lines in the figure show the case of a mortgage with 119 quarters remaining; that is 29 years and 3 quarters). New FRM borrowers, however, will face a higher mortgage rate and, as a result, initial DSC of almost 30 percent in the fast liftoff case (solid red line). But the real value of those payments will also gradually decline over time. 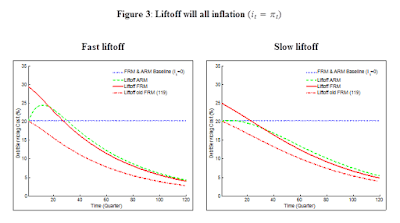 For ARM homeowners, both the existing and new homeowners, there are two opposing forces in place. On one hand, higher nominal interest rates increase nominal mortgage payments. On the other hand, higher inflation reduces their real value. The first effect is stronger initially but the second effect dominates over time. Furthermore, the point where the second effect starts to bite depends on the speed of the liftoff. While in the fast liftoff case the first effect dominates for the first eight years (32 quarters), in the slow liftoff case it hardly bites at all (dashed green lines).

To sum up, the effects of the liftoff on homeowners depend on three factors: (i) the prevalent mortgage type in an economy (FRM vs ARM), (ii) the speed of the liftoff, and (iii) what happens to inflation during the course of the liftoff.

Therefore, if the purpose of the liftoff is to “normalize” nominal interest rates without derailing the recovery, central bankers in both countries should wait until the economies convincingly show signs of inflation taking off. Furthermore, the liftoff should be gradual and in line with inflation.

Buzz words: “If the purpose of the liftoff is to “normalize” nominal interest rates without derailing the recovery, the Federal Reserve Bank and the Bank of England should wait until the economies show convincingly signs of inflation taking off.”

[2] In the U.K., the typical mortgage is the so-called standard-variable rate mortgage, which has an interest rate fixed for the first year or two. After this initial period, the interest rate can vary at the discretion of the lender, but usually the resets coincide with changes in the Bank Rate, the Bank of England policy interest rate. A “tracker” mortgage is explicitly linked to the Bank Rate. Here we abstract from these details.
[3] The examples assume that a homeowner’s real income does not change throughout the life of the loan, the loan at origination is four times the homeowner’s income, and mortgage lenders’ mark-up over market interest rates is three percentage points.r market interest rates is three percentage points.
Posted by David Andolfatto at 8:43 AM