As evidence of China's growth slowdown mounts, Tyler Cowen asks why people no longer seem to be talking about that country's much-heralded fiscal stimulus of 2008-2009. I put the question to China expert Yi Wen, my colleague here in the research division of the St. Louis Fed. I thought it would be of some interest to share what he had to say. DA


There are several issues involved here regarding China’s economic performance and the effects of its stimulus packages.
1) As the following graph shows, 5 years after the financial crisis, U.S. industrial production remained 1.3 percent below its peak level; Industrial output in the EU remains at 12.2 percent below its level five years ago; Japan’s industrial production remains at 19.2 percent, below its level; China’s industrial output is 76.1 percent above the level five years previously. Recall that these regions were and are still china’s largest trading partners and China’s total exports have declined permanently by more than 40% since the crisis and still not recovered. 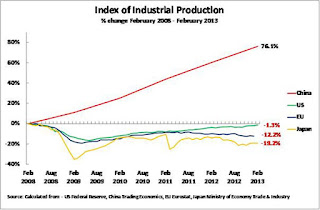 China’s industrial production therefore increased by over three quarters during a period when U.S. industrial production stagnated and EU and Japanese industrial production significantly declined. That is a conclusive success for China in this competitive struggle.
2) China’s stimulus package was designed to spend mainly on infrastructure buildup during a period when the costs of investment financing (borrowing) were the lowest. Since the operation of China’s first high-speed railroad merely six years ago, 28 Chinese provinces are now already covered by the world largest and longest high-speed rail network (more than ten thousand miles, greater than 50% of existing world capacity). If China had waited instead for 10 more years to do this, the costs would be many, many times higher.
3) Those being said, China today indeed faces the problem of excess industrial capacity, similar to US and European nations and Japan before WWI. China’s strategy to solve this excess capacity problem is to build a global infrastructure system (through so called “one belt, one road” program) that integrates the entire Eurasia continent and the Indian and Atlantic oceans transports, e.g., a full-fledged speed-train network stretching all the way south to Singapore and north to Russia and east to Europe is already under construction. This program is now backed by the newly established Asian Infrastructure Investment Bank (AIIB). This may look foolish to economists (remember China build the Great Wall for nothing J, not even shown up in GDP) but at least it will benefit global trade with significance no smaller than the Great Voyage. The age of maritime global trade (kick started by the Great Voyage) is perhaps going to be replaced or enhanced by cross continent land trade (a revision to the ancient Eurasian trade through the Silk Road).


To sum up, the Chinese appear to be more optimistic than the westerners, especially the well-trained economists, after 300 years of rejecting Capitalism (see my Working paper and forthcoming book: https://research.stlouisfed.org/wp/more/2015-006.  History will tell if they are right or not.
Posted by David Andolfatto at 9:06 AM