The "Audit" the Fed Crowd

Alex Pollock says that It's High Time to "Audit" the Federal Reserve. I'm glad to see that this headline puts the word "audit" in quotes. It suggests what Mr. Pollock means by "audit" differs from how most people understand the word: a complete and careful examination of the financial records of a business or person (Merriam Webster). 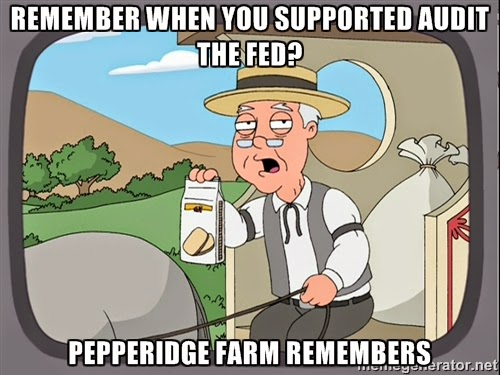 
“[An] audit of the Fed will finally allow the American people to know exactly how their money is being spent by Washington.”

Of course, the Fed does not control how money is being spent by Washington. The Fed prints money to buy government securities. It sometimes extends loans against high-grade collateral. Everything you want to know about these purchases and loans is publicly available. So Paul's initial line of attack has fizzled out, something that is implicitly acknowledged by Pollock when he writes:


The calls in Washington to “audit” the Federal Reserve are not for a narrow, bean-counting review of the institution’s financial statements.

Good. Progress has been made: the Fed's books are in order. Nothing scandalous to report (sigh). How else then to "audit" the Fed?

Let's be honest here. There is nothing new to discover in further auditing. This movement is motivated by what they perceive to be bad monetary policy. It doesn't even make sense to say we want to "audit" the Fed's policy because the policy is already transparent (which is, after all, what permits critics to label it "bad" in the first place!).

There is, of course, nothing wrong with critiquing Fed policy. Indeed, there are many economists working inside the Fed that critique various aspects of Fed policy all the time. And, as we all know, members of the FOMC can hold very different opinions ("hawks" and "doves"). Thoughtful critiques of policy should be welcomed. Policymakers and researchers at the Fed do welcome them.

Moreover, I'm all for full accountability. The Fed should be accountable to the American people--it is, after all, a creation of the American people through their representatives in Congress. But as I have said, the issue here is not about accountability. It is about a group of individuals who want to see their preferred monetary policy adopted. That's fair enough. I just ask that they be honest about their motives. It has nothing to do with audits or accountability.
Posted by David Andolfatto at 9:02 AM