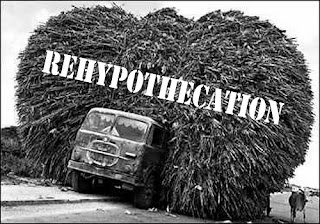 I've been trying to wrap my mind around the new 4-letter-word in finance: rehypothecation. I found out that it seems to be related to an old 4-letter-word: fractional reserve banking. I want to argue that these phrases do not deserve to be viewed as cuss words. At least, that's what I think so far. Let me explain why.

An acquaintance approaches you asking for a money loan of $100. He sheepishly offers his vehicle as collateral for the loan. The market value of the vehicle just happens to be $100. (Your acquaintance would prefer not to sell his vehicle because he only needs the cash on a short-term basis, say, one month). You both agree on a one-month loan at an (annualized) interest rate of 5%.

The technical term for this is hypothecation--i.e., when a borrower pledges an asset as collateral to secure a debt. The borrower retains ownership of the asset, but the asset is "hypothetically" under the control of the creditor, who is granted permission to take possession of the asset if the borrower defaults.

In the example above, your loan is 100% secured by your acquaintance's vehicle. But let's imagine instead that the vehicle is only worth $10. After talking with some friends who know your acquaintance a bit better than you do, you decide to go ahead with the $100 loan, secured by the $10 vehicle.

A fractional reserve banker? Yes. Let me relabel you a bank and your acquaintance a depositor. The depositor is in possession of $10 in cash (not a vehicle) and he goes to the bank to borrow money (not necessarily cash). The depositor opens an account with the bank and deposits his $10 of cash. The loans officer credits the depositor's account with $90 of electronic digits. (In the old days, the $90 would have taken the form of banknotes and the $10 deposit would have been in the form of specie.) The depositor now has $100 in money to play with (he can buy stuff using his debit card).

Some observations. First, banks do not lend cash. Banks create money. More precisely, they transform illiquid promises (the depositor's IOU) into liquid payment instruments (bank liabilities). Second, fractional reserve banking is absolutely critical to this process. If the bank was restricted to lending only up to the value of its cash deposits, there would be no point to banking (apart from serving as secure repositories). Insisting on a 100% reserve requirement is like insisting that you are not permitted to lend your acquaintance more than the value of his collateral. A restriction like this would certainly make the loan safe. But are such restrictions efficient? (And if you've ever made an unsecured loan to anyone, you have practiced the absolute worst form of fractional reserve banking.)

Well, alright, but what does any of this have to do with rehypothecation? Rehypothecation occurs when a creditor uses the borrower's pledged asset for his own use (e.g., selling it, or using it as collateral for his own borrowing). Rehypothecation plays a big role in the so-called shadow banking sector. The practice is often likened to fractional-reserve banking and is widely blamed for the failure of Lehman Brothers and MF Global; see here.

But just like fractional reserve banking, rehypothecation has its upside. To see this, let  me return to my original example of you and your acquaintance.

Returning to that story, recall that the agreement is to lend your $100 cash to your acquaintance for one month at 5% interest, collateralized by his $100 car. But you know what? It's not entirely clear that you won't be needing some of that cash yourself over the month. You don't think you will, but you might. Hmm, what to do if you do need the cash?

Just before signing the loan agreement with your acquaintance, you come up with this idea. You explain the circumstances to your acquaintance and ask him whether he would be willing to let you use his car as collateral for your own loan, should you find yourself strapped for cash. You acquaintance says sure, but what's in it for me? You offer to lower the interest rate on his loan to 2%. Agreed. (For an example, consider section IV-F in this brokerage account agreement issued by the discount retail broker Scottrade.)

Notice something interesting here. Suppose that you trust your acquaintance fully to repay the loan. Then, you might say, no collateral is needed to support repayment. I want to suggest, however, that the creditor may nevertheless ask for collateral and an associated rehypothecation right. The purpose of the collateral in this case is not to support repayment of debt between broker and client (you and your acquaintance), but to support the broker's (your) promise-making ability in some future transaction with some less trusting third party. The rehypothecation right essentially allows the broker to use deposited collateral as "money on demand."

To see how rehypothecation relates to fractional reserve banking, imagine that you find yourself borrowing $100 mid-month from some third party using your acquaintance's vehicle as collateral. There is at that point $200 in outstanding debt obligations that are supported by only $100 in assets. If rehypothecation rights are granted to the third party (in exchange for lower financing costs) and if the third party in turn uses the same collateral to secure a $100 loan from some fourth party, then we have $400 in debt supported by $100 in assets. And so on.

At each stage in this process, rights over the collateral are passed on to the last creditor in the chain. All previous debts are rendered unsecured; which is to say, the debts are supported by the debtors' desire to maintain their reputational capital. Creditors become more trusting. Is this a bad thing?

What can go wrong, of course, should be obvious: some event happens in which a debtor is either unwilling or unable to fulfil a promise. Those creditors that are secured will emerge relatively unscathed. But unsecured creditors will pay the price. None of this has anything to do with fractional reserve banking or rehypothecation, per se. It is the nature of unsecured credit; that is, credit supported by trust (in the willingness and ability of debtors to make good on their promises).

A credit crisis is, as the Italians used to say, un mancamento della credenza; literally, a suspension in the general belief that any promises will be kept. Credit (derived from credere, or to believe) plays an important role in financial markets and in the payment system. Legislation that restricts or prohibits unsecured lending would surely make financial markets safer. But at what price? There are no financial crises in a society ruled by financial autarky, in particular.
Posted by David Andolfatto at 10:06 AM