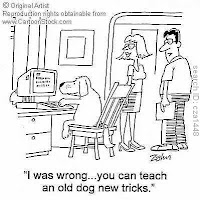 
The jobs crisis has brought an unwelcome discovery for many unemployed Americans: job openings in their old fields exist. Yet they no longer qualify for them.

Evidently, companies are asking more of their new recruits; they want workers with a broader range of skills. Tech companies, for example, are increasingly combining business analyst and systems analyst positions. Workers laid off from these positions during the recession frequently do not have the combined skill set that employers are now looking for.

What has changed? Why are companies now looking for workers with broader skill sets? I haven't really thought about it that much, but here a couple of (speculative) ideas.

One hypothesis is that these new demands reflect an ability on the part of firms to squeeze more output from workers, whose bargaining positions are weakened when unemployment is high. If this is true, then I suppose we should expect to see a similar pattern in past recessions. Moreover, we should (I think) expect the opposite to hold during booms. Do we, in fact, observe firms asking for narrower skill sets during economic expansions?

(It would be interesting to know (the article does not mention) whether workers with expanded skill sets are command higher wages, relative to the workers they replaced. Does anyone happen to know?)

Another hypothesis is that these new demands reflect the efficient outcome of a new reality, brought about by new technologies, or other changes in the economic environment. For a given environment, I imagine that there is an optimal skill set, or division of labor, within each firm (or line of business). It makes little sense to have every worker perform every conceivable task, or to hire a separate worker for each little task. It may or may not make sense to have the optimal mix of tasks per worker vary over the business cycle (one's view on this is likely to depend on what one believes is driving the cycle and what sort of mechanisms govern resource allocation in the labor market).

My guess is that secular developments (technological change) might be driving the demand for broader skill sets, and that these secular developments are interacting with separate cyclical developments to deliver the observations that are reported in the article. If this is true, then we should likely have observed these "new" demands growing even in the last expansion. I wonder what data is available to either support or refute this hypothesis.

In any case, judging by the evidence highlighted in this article, it appears that jobs are available and that qualified workers are in short supply. It's not immediately clear what this implies about how the rate of unemployment is likely to evolve in the foreseeable future. To the extent that unemployment workers recognize the need to upgrade their skills, they may temporarily dropout of the labor market to do so. The unemployment rate in this case is likely to drop in the near horizon. To the extent that skill upgrades are not viewed as necessary, unemployed workers may continue to search until they find a good job match, or until their reservation wages decline to the point of desperation (they will take any crappy job that helps pay the bills). In this latter scenario, unemployment may remain persistently high in the near horizon.

Several other questions spring to mind, but I was told by a loyal reader that I should shorten my posts, so I'll stop here! Feel free to share your thoughts.

One of my readers writes:


There was also research published today by Goldman Sachs on the search/match problem in the labor market.  Their approach was to look at data from a 'small business' survey conducted by the National Federation for Independent Businesses.  They looked at proportion of businesses reporting "no qualified applicants for job openings" and synthetically extended the series back in time by using the relationship between that series and the proportion of businesses reporting "quality of labor as most important problem".  They concluded that "the increase in unemployment has pushed firms’ difficulties in filling vacancies to record low levels", and that this is consistent with weak aggregate demand rather than a search/match problem.

I also thank this reader for directing me to the following related article from the WSJ: Unfilled Openings Frustrate Jobless. The following graph from the article shows an explosion in job openings since 2009, but very little movement in actual hires.

This data appears consistent with the theme in the article cited originally in this post. Employers appear to be choosier at this stage of the cycle; they are asking more from new recruits (e.g., broader skill sets). Of course, it is possible that workers are also exhibiting a high degree of choosiness (keeping their reservation wages high). As the article suggests, this may be because of extended unemployment benefits and/or mortgage troubles and poor credit scores that make it difficult for people to move for work.
As usual, the reasons underlying this apparent increase in choosiness varies.


Some companies complain that when they do try to hire, they have a hard time finding the right people.

Statements like these are not very informative. I know from my own experience in the construction sector that companies always have a hard time finding the "right kind of people." In fact, this problem is likely worse in a boom period (which is why firms typically get less choosy about worker quality in a tight labor market). The question is whether this problem is now more severe at this point in the cycle, relative to similar points in past cycles.
The following executive probably speaks for a lot companies:

At Leggett & Platt Inc., which makes metal parts for bedding and other purposes, Chief Executive David Haffner says his company remains hesitant about anykind of expansion, because it's not clear to what degree demand will snap back. But when it does hire, it's taking more time. "With more experienced talent on the market in these challenging times, we are utilizing a more rigorous screening and interviewing protocol," says Mr. Haffner. "We feel it is crucial to add 'top graded' talent."

I find the claim of "more experienced talent on the market" these days. My earlier post In Praise of Older Women suggests that the aged are in the midst of an employment boom (so old dogs are apparently pretty good at picking up new tricks!)

The quote above also emphasizes a lack of "demand." The question here is what's holding back "demand?" There is clearly a "lack of confidence" in the business sector relating to forces that are likely to impinge on future demand conditions. Has there been a change in economic fundamentals, leading to a bout of "rational pessimism?" Or is the lack of demand simply a product of some collectively irrational (but individually rational) psychological force? The appropriate policy response is likely to depend on the answer to these questions.
Posted by David Andolfatto at 2:23 PM

Email ThisBlogThis!Share to TwitterShare to FacebookShare to Pinterest
Labels: Unemployment