In Praise of Older Women

By all accounts, the U.S. employment picture looks bad. But what do we mean by "bad?" The most common way to demonstrate how bad it is, is via a diagram like this (source):

See also here. These displays take the level of employment at its cyclical peak and normalize it to zero. This is done for several earlier episodes, and then the evolution of employment is tracked from the onset of each recession. And, well, the current episode looks bad.

Diagrams like the one above are interesting. But I think they need to be read with some caution. You may not even know it, but the diagram has planted an idea in your head. The idea is that the data are stationary, and that reversion to the mean is desirable. It is sometimes useful to look at the broader picture; and this is what I propose to do here.

Here is a plot of the U.S. employment ratio (employment divided by population) over a longer horizon than is normally considered (1948-2010): 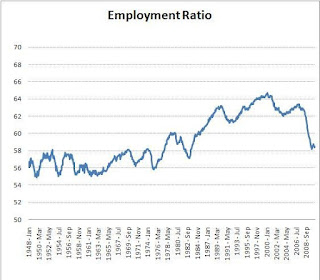 The first thing that should strike you is that the employment ratio does not appear to be stationary, at least, over this sample period. It seems to be roughly stationary in the first half of the sample, but then it grows steadily, reaching a peak in the late 1990s. Since that time, it has (arguably) been on a downward trend. It is possible that the recent cyclical decline is exacerbated by this downward trend (and may have contributed to the recent jobless recovery phenomena).

If the trend is indeed heading downward, in what sense should policymakers desire a return of employment to its earlier cyclical peak?  Do we know what the "natural" rate of employment is?

Perhaps the recent downward trend is not the only thing that needs explaining. We might also puzzle over the employment boom that seems to have begun in the mid 1970s. The following figure is revealing. 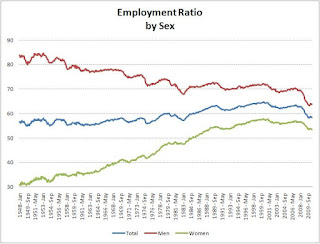 Let me now slice the data up into finer categories. Here is the employment ratio for men by age: 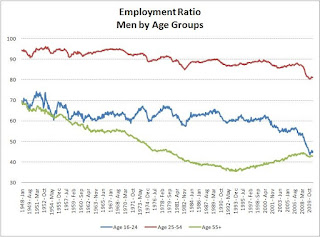 Here is what the employment ratio looks like for women across age groups: 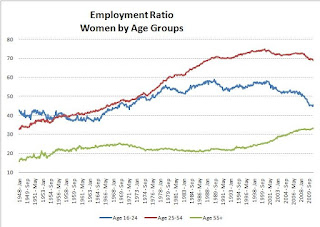 What this suggests is that the recent secular decline in female employment is attributable largely to the behavior of young women (are all going to college?). But what I find very interesting here are the labor supply choices of older women.  In particular, their employment continued to expand even throughout the recent recession!

I am not sure what is driving this behavior. I do find it interesting, however, that a large negative aggregate demand shock seems not to have had much of an impact on the demand for goods and services produced in "old age" sector of the economy.
Posted by David Andolfatto at 11:14 AM