Inflation is back together with a new season of America's favorite sport: zero-contact, finger-pointing. I thought I'd sit back and share a few thoughts with you on the subject on this cold Saturday afternoon. Use the comments section below to let me know what you think.

In one corner, I see some pundits somehow wanting to blame the 2021 inflation on workers. Workers are somehow forcing their improved bargaining positions on employers, raising the costs of production, with some or all of these costs passed on to consumers. Then, as workers see their real wages erode, the cycle begins anew begetting the dreaded "wage-price spiral." Those pesky workers.

There's no doubt something to the idea that wage demands can lead to higher prices (and why shouldn't workers want cost-of-living adjustments?) But what is the evidence that this behavior was the impulse behind the 2021 inflation?

While it's difficult to tell just by eye-balling the data, I think it's reasonable (under this hypothesis) to see wage growth precede (or at least be coincident with) inflation. Unfortunately (for this hypothesis), this is not what we see in the data. In the diagram below, use the Atlanta Fed's Wage Growth Tracker to construct nominal wage inflation for the bottom (green) and top (yellow) wage quintiles. This is plotted against CPI inflation (blue). 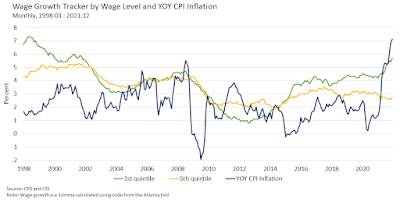 On the other side of the political spectrum, we see pundits and politicians blaming the 2021 inflation on "corporate greed." Framing the issue in terms of "corporate greed" is not especially helpful, in my humble opinion. The substantive part of this claim is that large firms were somehow able to leverage their pricing power in 2021 into higher profit margins and record corporate profits. There is, in fact, some evidence in support of this. The diagram below plots profit margins for firms in the Compustat database. Profit margin below is computed on an after tax basis (net income divided by sales). The data is divided between large and not-large firms. Large firms are those in the top 10% of sales volume. 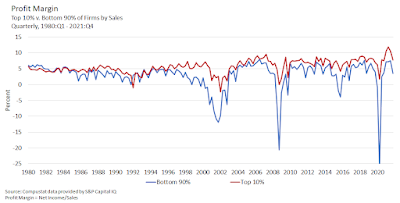 By this measure, profit margins seem remarkably stationary over long periods of time. There is some evidence of a modest secular increase in margins c. 2003. Large firms have higher margins. But the part I want to focus on here is near the end of the sample. Profit margins for 90% of firms seem close to their historical average. We see some evidence that profit margins for the top 10% of firms increased in 2021. But this increase peaked in Q3 and then declined back to historical norms in Q4. While the spike in profit-margins likely contributed to inflation, it hardly seems like a smoking gun. And the Q4 reversion to the mean suggests that "corporate greed" is not likely to be a source of inflationary pressure in 2022.

Well, if workers and firms are not to blame, then who or what is left? There's the C-19 shock itself, of course, along with the effects it has had on the global supply chain. But the 19 in C-19 refers to the year 2019 (and 2020). We're talking about 2022 here. Sure, the supply chain issues are still with us. But at most, I think they account for a substantial change in relative prices (goods becoming more expensive than services) and an increase in the cost-of-living (an increase in the price-level--not a persistent increase in the rate of growth of the price-level).

While the factors above no doubt contributed in some way to the 2021 inflation dynamic, let's face it--the size and persistence of the inflation was mainly policy-induced. The smoking gun here seems to be the sequence of the C-19 fiscal transfers. As we know, this had the unusual and remarkable effect of increasing personal disposable income throughout most of the pandemic. The Fed also had a role to play here because it accommodated the fiscal stimulus (normally, one might have expected a degree of monetary policy tightening to partially off-set the inflationary impulse of fiscal stimulus). Below I plot retail sales (actual vs trend) and the timing of the fiscal actions. 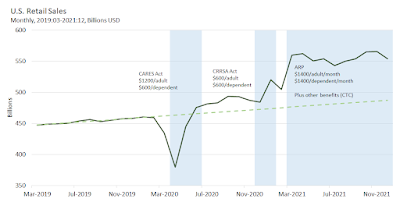 I used retail sales here (I think I got this from Jason Furman), but the picture looks qualitatively similar using PCE (the path of nominal PCE went above trend in 2021 and not earlier in the way retail sales did). Just eye-balling the data above, I'd say the CARES Act was a major success (especially under the circumstances). The subsequent two programs might have been scaled back a bit and/or targeted in a more efficient manner. And, knowing what we know now, the Fed could have started its tightening cycle in 2021.

Having said this, I wouldn't go so far as to say these were flagrant policy mistakes--given the circumstances. If there was a policy mistake, it was in not having a well-defined state-contingent policy beforehand equipped to deal with a global pandemic. Not having that plan in place beforehand, I think monetary and fiscal policy reacted reasonably well.

Policymaking in real-time is hard. And policy, whether formulated beforehand or not, must necessarily balance risks. There was a risk of undershooting the support directed to households. We saw this during the foreclosure crisis a decade ago. And there was a risk of overdoing it in some manner. Keep in mind that it was not clear when the legislation was passed how 2021 would unfold. Similarly, for the Fed--perhaps still feeling the sting of having moved too soon and too fast in the past, hopeful that inflation would decline later in the year--delayed its tightening cycle to 2022. It wasn't perfect. But taken together, the economic policy responses had their intended effect of redistributing income to those who suffered disproportionate economic harm during the pandemic.

Finally, what does all this mean for inflation going forward? Well, as I suggested above, I don't think we have to worry about a wage-price spiral (the fiscal policy I think is necessary to support such a phenomenon is not likely to be present). Profit margins appear to be declining (reverting to their long-run averages). The money transfers associated with the last fiscal package are gone for 2022. No big spending bills seem likely to pass in 2022. For better or worse, we're talking a considerable amount of "fiscal drag" here (although, some have pointed to how flush state government coffers are at the moment). Hopefully (fingers crossed), supply-chain problems will continue to be solved. If so, then all of this points to disinflation (a decline in the rate of inflation) going forward. Some recent promising signs as well: [1] month-over-month CPI inflation has declined for two consecutive months (November and December); and [2] the ECI (employment cost index) decelerated in Q4 of 2021. (These numbers are notoriously volatile, so don't put too much stock in the direction. But still, it's better than seeing them go the other way.)

Some caveats are in order, of course. In December 2020, I suggested we prepare for a "temporary" burst of inflation in 2021. While this came to pass, the level of inflation surprised me (to be fair, I hadn't incorporated the ARP in my assessment, but even if I had, I think I still would have been surprised). Moreover, I was also surprised by the persistence of inflation--I thought it would decelerate more rapidly (even given the ARP). This just serves to remind me how bad I am at forecasting. Someone recently mentioned a great quote by Rudi Dornbusch: "In economics, things take longer to happen than you think they will, and then they happen faster you thought they could." I can relate to this.

Inflation may turn out to be more persistent that I am suggesting. But how might this happen, given the disinflationary forces I cited above? One reason may have to do with the tremendous increase in outside assets the private sector has been compelled to absorb--the increase in the national debt has manifested itself as an increase in private sector wealth. Jason Furman sees this as "excess saving." The question going forward is whether the private sector will be compelled to spend this (nominal) wealth (it already has done so, as my chart above shows) or continue to save (not spend) it? It is possible that this "pent up demand" will be spent over a prolonged period of time. The effect of this would be to keep inflation elevated higher than it would otherwise be (serving to reduce real nominal wealth). How long this might take, I have no idea. But even so, it seems clear that the effect cannot persist indefinitely. At some point the debt-to-GDP ratio will decline to its equilibrium position (D/Y has already started to decline; see here).

Another reason why inflation forecasts should be discounted is that it's very difficult to forecast future contingencies. What might happen, for example, if Russia invades the Ukraine this year? Events like these will create disruptions and there's not much monetary and fiscal policy can do about them. But whatever happens, I think the long-run fiscal position of the U.S. will remain anchored (Americans will demand this). And remember, the Fed is bound by its Congressional mandates to keep inflation "low and stable." The Fed's record on inflation since the Volcker years has been pretty good. I'm betting that the record will be equally good over the next 10 years.

PS. I see some people out there strongly asserting it is a "fact" that fiscal policy did not cause the 2021 inflation (see here, for example). The reason, evidently, is because inflation is a global phenomenon. There's something to this, of course. After all, C-19 is a global pandemic. But this reasoning nevertheless seems faulty to me. First, the USD is the global reserve currency. It's quite possible that the U.S. exported some of its inflation to the world (much in the way it did in the 1970s). Second, many other countries (like Canada, for example) adopted similar fiscal policies. Those countries with less expansive fiscal policies also displayed lower inflation, as far as I know. Rather than deflect the blame, we should own it here. Fiscal policy had a lot of positive effects too (e.g., lowering child poverty). The challenge, as always, is to develop ways to calibrate these policies in a more effective manner.

Posted by David Andolfatto at 3:41 PM