Is the ZLB an economic or legal constraint?

The so-called zero-lower-bound (ZLB) plays a prominent role in modern (and even older) macroeconomic theories. It is often introduced in a paper or at conference as a fact of life -- an unavoidable property of the physical environment, like gravity. But is it correct to view it in this way? Or is the ZLB better thought of as legal constraint--something that can potentially be circumvented by policy?

The Financial Services Regulatory Relief Act of 2006 allows the U.S. Federal Reserve (the Fed) to pay interest on reserve accounts that private banks hold at the Fed. Specifically, the Act states that:

The effective date of this authority was advanced to October 1, 2008, by the Emergency Economic Stabilization Act of 2008.

It is not clear (to me, at least) whether the Act grants the Fed the authority to pay a negative interest rate on reserves. Note that if the interest-on-reserves (IOR) rate is set to a negative number, then banks would in effect be paying the Fed a "service fee" for the privilege of holding reserve balances with the Fed. But if the Fed is not legally permitted to use negative interest rate policy (NIRP), then the ZLB is obviously a legal constraint.

This legal constraint, however, may not be binding if the ZLB is also an economic constraint. In fact, the traditional explanation for the ZLB is the existence of physical currency bearing zero interest. The idea that arbitrage will effectively keep interest rates from falling below zero is deeply ingrained in the minds of economists. For example, Corriea, et. al. (2012) write:


Arbitrage between money and bonds requires nominal interest to be positive. This "zero bound" constraint gives rise to a macroeconomic situation known as a liquidity trap. It presents a difficult challenge for stabilization policy.

However, we know from recent experience that the ZLB appears not to be an economic constraint.  Several central banks today have set their deposit rates into negative territory: 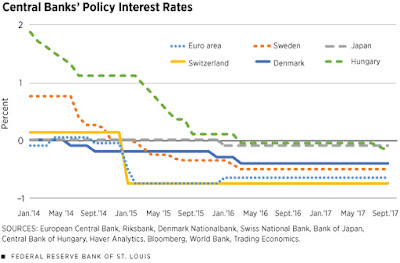 There is currently over $10 trillion of government debt in the world yielding a negative nominal interest rate; see here. As of this writing, even long bonds like the German 10-year Bund are in negative territory.

Well, alright, so the ZLB is evidently not an economic constraint. But surely there is some limit to how low nominal interest rates can fall? This lower limit is called the effective lower bound (ELB). And economic theory is clear: if we're at the ELB in a recession, then monetary policy has done about as much as it can be expected to do.

But what exactly is the ELB? Is it -1%, -2%, -5%, or perhaps even lower? Economists like Miles Kimball believe it to sufficiently negative to warrant NIRP as an effective policy tool; see here (see also the discussion by Ken Rogoff in chapter 10 of his book). These arguments, however, did not seem to gain much traction. For example, in the present discussions concerning the Fed's new long-run monetary policy framework, the possibility of NIRP is not even mentioned. But perhaps it should be if the ELB is in fact significantly below zero. In what follows, I want to make my own (related) argument for why the ELB is probably a lot lower than most people think.

Suppose the Fed was to set the IOR to -10% (in a deep demand-driven recession, this would presumably be accompanied with a promise to raise the IOR at some point in the future). The traditional economic argument suggests that any security dominated in rate of return by cash would in this case be driven out of circulation.

The first thing we could imagine happening is banks attempting to convert their digital reserves into vault cash. Banks are presently holding over $1.6 trillion in reserves with the Fed. The largest denomination Federal Reserve note is $100. This is what $1 trillion in $100 bills apparently looks like: 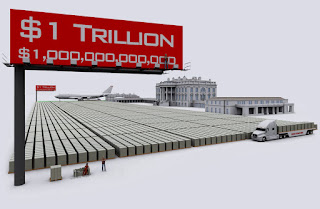 That's about the size of a football field. Banks would not convert all of their reserves into cash--even if it was costless to do so--because they'd need about $20-30 billion or so to make interbank payments. Of course, managing all that cash would be far from costless. But there is a simpler reason for why banks would not make the conversion. The Fed could simply charge banks a 10% service fee on their vault cash.

Alright, well what effect is the -10% IOR rate going to have on the deposit rate (or fees) that banks offer (or charge) their depositors? Banks are not likely to pass the full cost on to their depositors, especially if they view the NIRP to be temporary, because they'll want to maintain their customer relationships.

But let us take the extreme case and suppose that NIRP is perceived to be permanent. Then surely deposit rates will decline (or bank fees will rise) significantly. Deposit rates may even decline to the point where depositors start withdrawing their money from the banking system. Banks may well let this source of funding go if they could borrow more cheaply from the Fed (banks would need to borrow reserves to honor the withdrawal requests of their customers). Of course, the Fed lending rate is also a policy variable and could, in principle, be lowered to negative territory as well.

But how realistic is it to imagine all or most bank deposits converted to cash? While this might be the case for small value accounts, it seems unlikely that the business sector would be able to manage its payments needs without the aid of the banking system. Even money market funds need to work through the banking system. I suppose one could imagine a new product created by (say) Vanguard in which they create a cash fund with equity shares redeemable for cash that is collected and stored in rented Las Vegas vault. But the moment the activity is intermediated, it becomes taxable. If the Fed is not permitted to tax (oops, charge a service fee) such entities, the fiscal authority could, in principle, implement a surcharge that is set automatically off the IOR rate in some manner.

I think in this way one can see how the ELB might easily be well below -5% (or more). This is probably low enough to allow us to disregard the ELB as a binding economic constraint. The relevant constraint is always a legal one. And laws can be changed if it is deemed to serve the public interest.

Keep in mind that in a large class of economic models, ranging from Keynes (1936) to New Keynesian, there is potentially much to be gained by eliminating the ZLB. If these models are wrong, then let's get rid of them. But if they're roughly correct, why don't we take their policy prescriptions seriously? Let's stop talking about the ZLB as if it's a force of nature. It is a policy choice. And if it's a bad policy choice, it should be changed.

Posted by David Andolfatto at 8:51 AM