In my previous post (Inflation and Unemployment), I reviewed what I thought was a fair characterization of the way the Federal Reserve Board staff organize their thinking about inflation and unemployment, as well as how this view of the world was at least partly responsible for the "hawkish" overtone of current Fed policy. I also suggested that the inflation and unemployment dynamic might be better understood through the lens of an alternative theory that emphasized the supply and demand for money (broadly defined to include U.S. treasury debt).

I want to thank Paul Krugman for taking the time to critique my post and draw attention to an important issue that concerns U.S. monetary policy makers today (see: Immaculate Inflation Strikes Again). I was only a little disappointed to learn that I agreed with almost all of what he wrote in his column. But if this is the case, then what are we debating? And more importantly, how does it matter, if at all, for monetary policy?

The amount of disagreement in macroeconomics is often exaggerated and I think this has definitely been the case here. While we may disagree on some things, we seem to agree on the most important part, namely, on the present conduct of U.S. monetary policy.

Krugman begins his piece by stating three questions. Let me state the questions, followed by my own answers and comparisons.

1. Does the Fed know how low the unemployment rate can go? I have quipped before that this is one case in which the Fed can definitely count on a zero-lower-bound being in effect (and this is not just in theory, Switzerland had virtually zero unemployment throughout the 1960s, with low inflation I might add). But what this question is really asking is how low can the "natural" rate of unemployment go? I agree with Krugman: we don't know. But I'll further add: we don't even know if a "natural" rate of unemployment exists in the first place. It's just a theory, after all (which is not to say it shouldn't be taken seriously, only that we need to keep that important caveat in mind).

2. Should the Fed begin tightening now, even though inflation is still low? This is legitimately debatable--and the FOMC is presently debating it. My own view, on balance, seems presently more aligned with the "doves" on the committee. And so I also agree with Krugman on this score, namely, that the Fed could be tightening too aggressively. Krugman suggests that there are several reasons supporting his view and he mentions a few of them. They are all legitimate reasons, in my view. But I could add more reasons, based on my own preferred theory of inflation. The demand for money (broadly defined to include U.S. treasuries) appears to remain elevated. This disinflationary force has been in place for a long time and could, as I explain here, account for the lowflation phenomenon (see also here). If you follow that link, you'll note that I quote Krugman approvingly in regard to his view about monetary policy in a liquidity trap. Perhaps I am wrong, but I read Krugman here as not recommending that the Japanese lower their unemployment rate to raise inflation. Instead, he appeals to the model I alluded to in my post: a monetary-fiscal theory of inflation. If the Japanese want inflation, just cut taxes and finance social security spending by printing JGBs (as I recommended here). I'm not sure what this has to do with "immaculate" inflation. (I did learn from Nick Rowe that "maculate" is indeed a word.)

3. Is there any relationship between inflation and unemployment? I think it would be odd for any macroeconomist schooled in general equilibrium to suggest that the answer to this question is unequivocally no. The answer is yes. The real question is what type of relationship? In labor market search theories of unemployment, where firms and workers bargain over a joint surplus, a low unemployment rate can result in a higher real wage because workers have greater bargaining power. If a decrease in the unemployment rate leads to a rise in the real wage, it could, ceteris paribus, have an effect on the price-level (and, if prices are temporarily sticky, the adjustment could come along other margins). But an increase in the price-level is not the same thing as an increase in the inflation rate (though short-run price-adjustment costs can transform a price-level effect as a short-term rise in measured inflation). For workers to afford buying goods in the presence of ever-rising prices, their bank accounts are going to have to grow accordingly. Ultimately, this can only happen in aggregate if the aggregate quantity of money is growing, either through the banking sector or through the increase in the supply of outside money (including treasury debt). This is the sense in which I think inflation has to be a monetary phenomenon and that, moreover, the actual rate of inflation is ultimately not governed by whether unemployment is living above or below its "natural" rate, whatever that is.

So perhaps there's some room for debate on point 3. But we should be careful not portray the question as an "either/or" issue. We could just be two blind men, feeling different parts of the elephant--the two interpretations are not necessarily inconsistent with each other. We should try to work this out. On the plus side, it seems we are led to the same policy recommendation. This is something worth noting. (I plead guilty on the score of needlessly antagonizing people who "believe in" the Phillips curve. Rather than suggesting we abandon the theory, I could instead have suggested we supplement it with the monetary view.)

Does the debate over question 3 matter? Yes, it could, because different interpretations of how the world works usually--though not always---implies something different about optimal policy. The Phillips curve theory of inflation suffers from a free parameter problem: the natural rate is unobservable and hence, one can always appeal to a shift in the natural rate to explain away discrepancies with the data. However, the monetary theory I prefer also suffers from a free parameter problem: money demand is not directly observable either. I can always appeal to some unobserved shift in money demand to explain away discrepancies with the data. For this reason, it would be useful for economists to identify "robust" policies--policies that can be expected to deliver good results regardless of which theory best describes the world we are living in.

Is the Phillips curve view of inflation contributing to a policy mistake? I wanted to suggest in my post that it is, although this is not necessarily a fault of the theory as much as how it is applied. That is, there may be no policy mistake in the making if the FOMC simply lets its estimate of the natural rate fall freely as evidence of impending inflation fails to materialize. However, this is not what is happening. As Jim Bullard explained to me, he believes that Phillips curve proponents have a (strictly positive) lower bound on their estimate of the natural rate. The unemployment rate is so low now -- how can it possibly go any lower -- this has to lead to inflation in the near future -- it just has to. We'd better start raising now, before we find ourselves behind the curve.

Here is where the "monetarist" view could temper such resolve. Granted, the global outlook is looking relatively rosy, and fiscal policy seems expansionary--these are both inflation risks from a monetarist perspective. On the other hand, there is considerable uncertainty in this outlook, not the least of which is presently being fueled by talk of a global trade war. In uncertain times, consumers and investors are likely to lower their demand for goods and services--increasing their demand for safe assets, like U.S. dollars and U.S. treasuries. We can see these concerns weigh on long-bond yields. Market-based inflation expectations (like the 5yr-5yr forward) seem well-anchored. Current inflation is running below target. All of this suggests that the Fed can afford not to move aggressively at this time (to be fair, the FOMC regularly emphasizes the "data dependent" nature of its policy path). And yes, this is consistent with PC advocates that are willing to let their estimate of the NRU decline in line with the evidence.

This post is already getting too long and so I wouldn't blame you if you stopped reading here: the main points I wanted to make have been made. Still, I have a bit more to say, so in case you are interested...

Krugman presents the following data for Spain. He writes "Consider, for example, the case of Spain. Inflation in Spain is definitely not driven by monetary factors, since Spain hasn’t even had its own money since it joined the euro. Nonetheless, there have been big moves in both Spanish inflation and Spanish unemployment:" 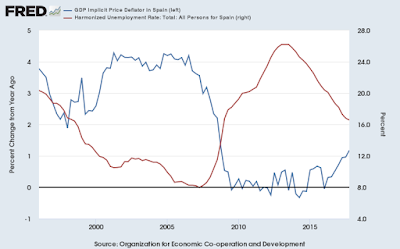 Krugman asserts because Spain doesn't have its own monetary policy, that monetary factors were not responsible for swings in Spanish inflation and unemployment. But my interpretation of the great crash and subsequent rise in unemployment is that it was caused by a large positive money demand shock (where again, I stress, by money I include safe government debt). This positive money demand shock (flight to safety) is just the opposite side of what Krugman and others would label a negative aggregate demand shock. So once again, I think Krugman is digging moats (perhaps unintentionally) where he could be building bridges.

Finally, on Krugman's broader point: "economics is about what people do, and stories about macrobehavior should always include an explanation of the micromotives that make people change what they do. This isn’t the same thing as saying that we must have “microfoundations” in the sense that everyone is maximizing; often people don’t, and a lot of sensible economics involves just accepting some limits to maximization. But incentives and motives are still key."

Posted by David Andolfatto at 10:22 AM