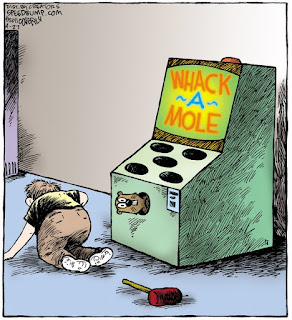 In my previous post I took a crack at understanding Paul Romer's mathiness critique. As far as the post related to Romer (most of it was devoted to Brad DeLong's careless embellishment of the idea), my assessment was that Romer is basically just frustrated that his ideas have not swept away the competition in the field of growth theory. I do not believe that the academics Romer called out are defending indefensible positions for the sake of academic politics. To me, the present situation looks more like a healthy competition between theories of growth emphasizing different mechanisms. This is just what one would expect in a field where the forces at work are complicated and the answers to important questions are hard to come by.

Judging by his reply to my post here, it seems that Romer has a rather low opinion of me. Evidently, I am an "Euler-theorem denier." Admittedly, this is not the worst thing I've ever been called. But in addition to this, I am apparently motivated to deny the truth of this mathematical proposition because doing so signals my commitment to an academic club of serpents that includes the likes of Nobel prize-winning economists Bob Lucas and Ed Prescott. Paul, you flatter me.

I want to take some time here to address the specific charge leveled against me by Romer:

Andolfatto’s brazen mathiness involves a verbal statement about a mathematical model that flies in the face of an impossibility theorem. No model can do what he claims his does. No model can have a competitive equilibrium with price-taking behavior and partially excludable nonrival goods.

Consider an economy where people combine raw labor (n) with skill (x) to produce labor services (e) according to the formula e = xn. Interpret n as hours worked over given period of time and assume, for simplicity, that everyone has the same n. On the other hand, people generally differ in their skill level, x. People with greater skills (or skill sets) are represented by larger values of x.

What makes people operating in the same environment more or less skilled than one other? Well, it could be several things. Consider two laborers, one of which is endowed with a physical tool that doubles labor productivity. Then we can write x = 1 for the one laborer and x = 2 for the other. Now consider two entrepreneurs, one of which is possessed with a "mental tool" (an idea, or some general know-how) that doubles labor productivity. Then we could similarly write x = 1 for the one entrepreneur and x = 2 for the other.

Physical and mental tools can differ along an important dimension called "rivalry." Economists call physical objects "rival"(or "subtractable") goods because a physical tool can be in the possession of only one laborer at any given time. The same need not be true for a mental good like an idea. Suppose that "knowing how to perform a task at level x" requires knowledge of a certain recipe. Unlike a physical good, an idea is not subtracted from your mind if you share it with someone else. If I teach you my calculus tool, this in no way diminishes my capacity to use the same calculus tool (or what amounts to the same thing, a perfect replica of my calculus tool). Economists call goods with this property "non-rival" or "non-subtractable" goods.

Alright then, let's proceed to the next step. Assume that the aggregate production function takes the form Y = aE, where a > 0 is a scalar and E represents the aggregate labor input measured in "efficiency units." That is, E equals the sum of e = xn over a population of size N. Let me normalize n = 1 and define X as the sum of x over population N. In this case, E = XN.

Notice that the aggregate production function exhibits constant returns to scale in E. The function is also linear in N. Of course, the function displays increasing returns in X and N together. That is, if we double both X and N, output Y is more than doubled.

The question Romer might ask at this point is "where are the books in this economy?" What he means by this is why can't the smartest person in this economy (the one with the largest x) not publish his knowledge in a recipe book and sell it to the others for a huge gain? This is an excellent question. The answer to it is that knowledge is not always very easily communicated and absorbed by all members of society in this manner. To the extent that knowledge transfer is difficult, the smartest guy in the room has a temporary monopoly over the idea that generates the highest x. Personally, I am surprised that Romer is so offended by this assumption of a missing market. Any university professor knows that distributing the course text book does not, by itself (re: Lucas quote 2009), lead to a growth of his/her students' knowledge base. Some types of knowledge can be sold, but other types of knowledge must be absorbed through effort, not through simple purchase. It is an empirical question as to which type of knowledge transfer mechanism is more or less important.

Next, I want to impose perfect competition. I do this not because I am wedded to the idea that this is how one must model the economy. I do it because Romer claims that it cannot be done.

But wait a minute...how can I assume perfect competition when the smartest person has a monopoly over his/her x? The answer is simple. The people in this economy are competing over the supply of efficiency units of labor e. There is no monopoly over the supply of labor services, e. Under perfect competition, the equilibrium price of an efficiency unit of labor is given by w* = a.  Of course, the measured wage per unit of raw labor (w*x) differs across people according to their skill x. The person with the highest x commands the highest price per unit of raw labor.

I should like Paul to note that Euler's theorem does indeed hold in my economy. The entire output is exhausted as payments for labor services (measured in efficiency units). Would people ever devote costly effort to learn something that would give them a higher x in this competitive economy? Sure, why not? Suppose that some raw labor time can be moved away from work and into a learning activity (l). The opportunity cost of this time is the person's foregone wage w*xl. The benefit is the expected value of learning something new (a higher x).

Anyone with an elementary training in economics can plainly see that the model described above has a competitive equilibrium with price-taking behavior and partially excludable non-rival goods. Ergo, Romer is wrong.

I am led to speculate how Romer might object to my counterexample. I suspect he might claim that the x in my model is not really a non-rival good. I get the feeling he might be defining a non-rival good as an idea that can be costlessly disseminated and instantaneously absorbed throughout the population (unless the use of the idea is protected by patent, etc.). If this is the case, then the argument would seem to be one of semantics.

In any case, I have made my point. Romer's proposition above is invalid. One can model a competitive equilibrium with price-taking and partially excludable non-rival goods. This should not be taken as a criticism against Romer's preferred modeling strategy. I'm actually a fan of his research program. My complaint with Romer's mathiness critique is that it ascribes unseen and unknown ulterior motives to a class of economists that find it fruitful to view growth through the lens of competitive equilibrium.

***
PS. I see that Nick Rowe has offered a thoughtful response to Romer's "whack-a-mole" comment.

Posted by David Andolfatto at 1:03 PM