How far are we from trend?

I am always amazed at how well a log-linear trend line seems to fits real GDP (or per capita GDP) in the United States. Through a great depression, sandwiched by two world wars, secular changes in the relative importance of different sectors (agriculture, manufacturing, services), the baby boom, the increase in female labor force participation, etc. Through it all, the U.S. economy just seems to revert to the same log-linear trend. Maybe it was just a fluke. Whatever the case may be, that trend seems to have broken down since the great recession. We've all seen the diagram (the red line in the graph below -- thanks to my colleague Fernando Martin for the nice pictures). 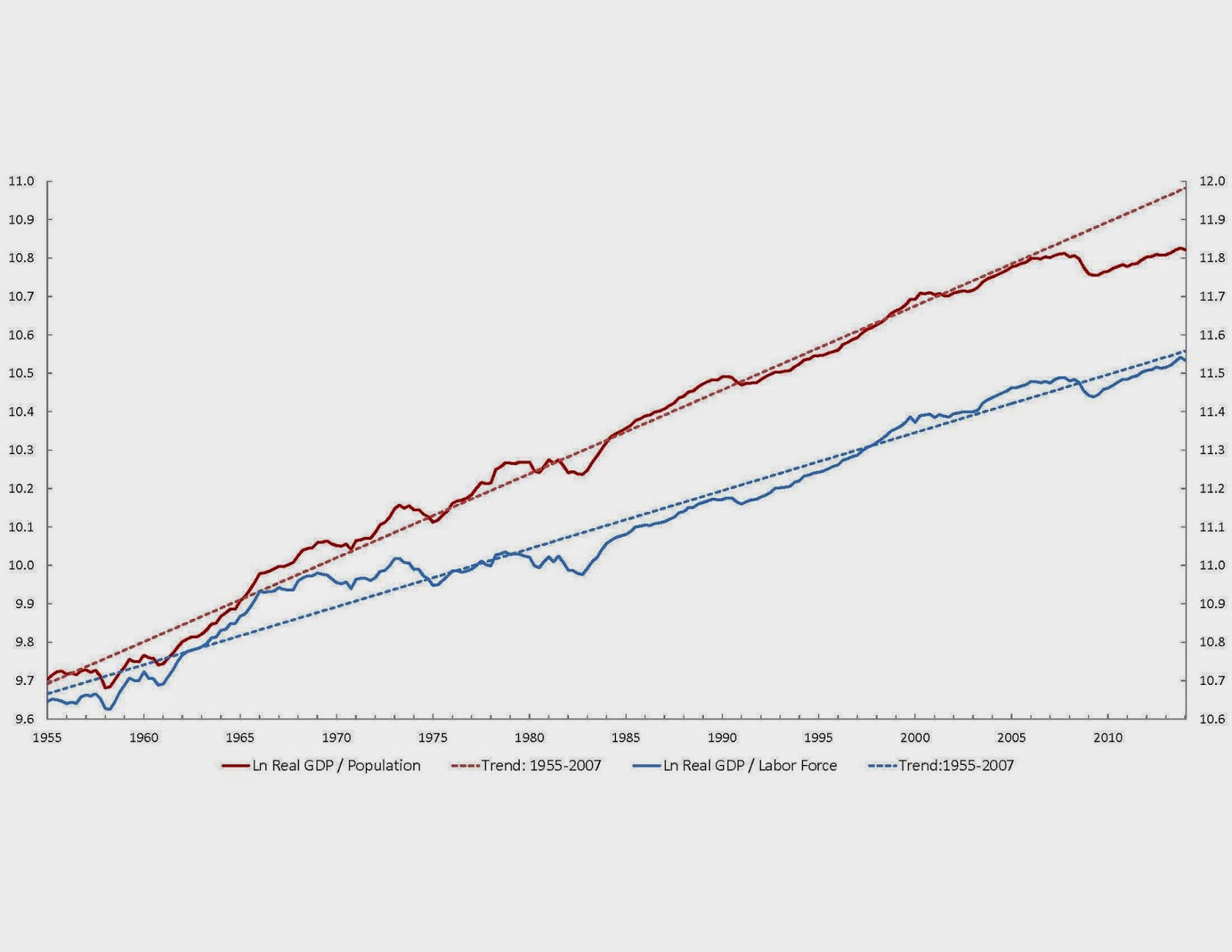 But given what we know about U.S. demographics--in particular the large rise, then fall in labor force participation, is the red line really the best way to look at things? A rough way to control for demographics is to consider the real GDP as a ratio of the labor force, instead of population. That is what the blue line does above. Once again, the trend line is computed for the same period 1955-2007. The average growth rate here is 1.5% per annum. What this tells us is that a lot of our measured growth over this period was due to nonstationary labor force behavior, and not just productivity. Oh, and the output gap near the end of the sample is considerably smaller. (It is too small to the extent that the recent decline in the labor force is attributable to "discouraged workers" who plan to return once conditions improve.)

Here is the same analysis for Canada: 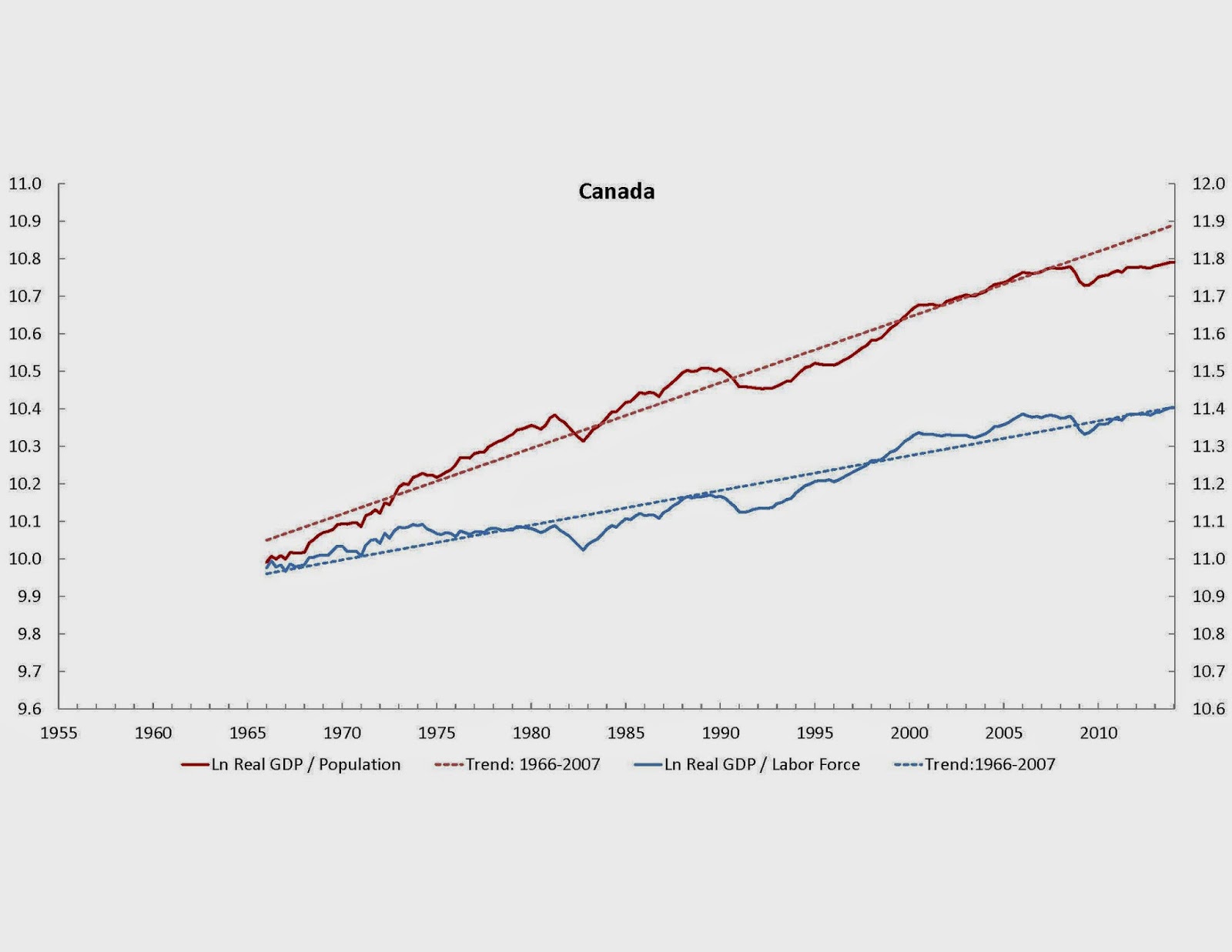 The average growth rates are 1.7% (red) and 0.9% (blue), per annum. The blue line suggests that the Canadian economy is right on trend.

I think it's instructive to compare the U.S. to Canada. Consider, for example, the employment-to-population ratio for males aged 25-54: 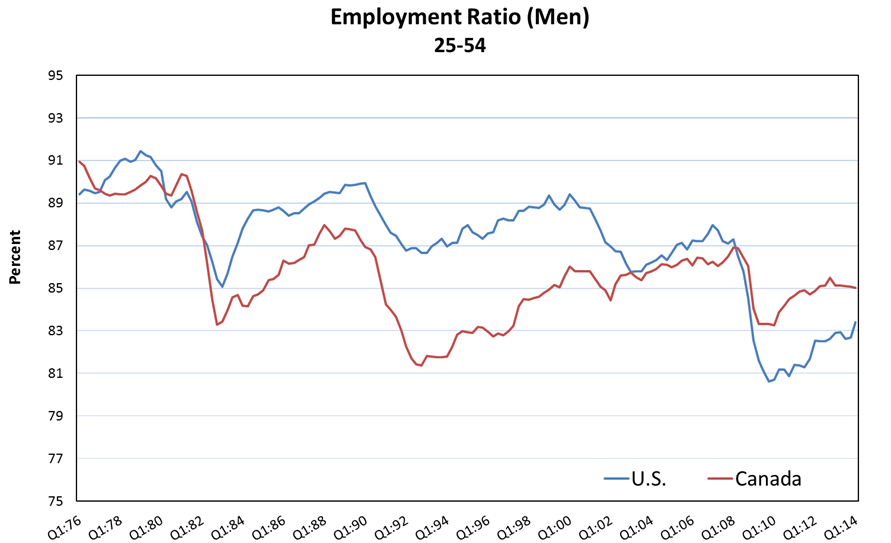 There is a modest secular decline in the employment ratio in both countries.The Canadian employment ratio is currently not too far from its historical average, while the U.S. number still has some way to go. Of course, the great recession hit the U.S. much harder than Canada. Canada's great recession began in 1990 and it took about a decade for that economy to recover.

I began thinking about the similarity of the recent U.S. experience with Canada's earlier experience in this post: The Great Canadian Slump: Can it Happen in the U.S.? I followed up with a cross-country comparison of labor market behavior through the two episodes here: Employment Slumps in Canada and the U.S. Let me update the data there for males aged 25-54: 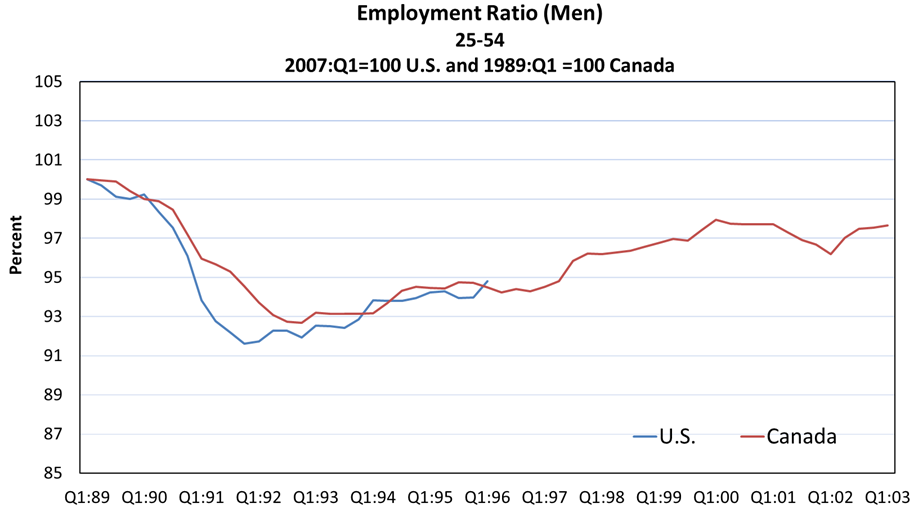 If the Canadian experience through the 1990s (red line) serves as a guide, then employment growth in the U.S. (blue line) will remain in recovery mode for another 4 or 5 years. While much of the gap has already been filled (it is not as dramatic as the first diagram suggests), there is still a considerable way to go when one looks at employment (instead of unemployment). So perhaps we are closer, but not as close to our goals as Jim Bullard suggests here: A Tame Taper.

Posted by David Andolfatto at 9:32 AM