What is the OLG model of money good for?

I want to say a few things in response to Brad DeLong's post concerning the usefulness of overlapping generations (OLG) models of money (and on the value of "microfoundations" in general). Let's start with this:

Why is he saying this "over and over again" and to whom is he saying it? What if I had said "As I say over and over again, forcing your model to have hand-waving foundations when they are the wrong hand-waving foundations is not a progressive but rather degenerative research program."? That would be silly. And the quoted passage above is just as silly.

A theory usually take the following form: given X, let me explain to you why Y is likely to happen. The "explanation" is something that links X (exogenous variables) to Y (endogenous variables). This link can be represented abstractly as a mapping Y = f(X).

There are many different ways to construct the mapping f. One way is empirical: maybe you have data on X and Y, and you want to estimate f. Another way is to just "wave your hands" and talk informally about the origins and properties of f. Alternatively, you might want to derive f based on a set of assumed behavioral relations. Or, you may want to deduce the properties of f based on a particular algorithm (individual optimization and some equilibrium concept -- the current notion of "microfoundations"). Some brave souls, like my colleague Arthur Robson, try to go even deeper--seeking the biological foundations for preferences, for example.

I don't think we (as a profession) should be religiously wedded to any one methodological approach. Which way to go often depends on the question being asked. Or perhaps a particular method is "forced" because we want to see how far it can be pushed (the outcome is uncertain -- this is the nature of research, after all). And I'm not sure what it means to have the "wrong" microfoundations. (Is it OK to have the wrong "macrofoundations?") Any explanation, whether expressed verbally or mathematically, is based on assumption and abstraction. Something "wrong" can always be found in any approach -- but this is hardly worth saying--let alone saying "over and over again."

Now on to the OLG model of money. Here is DeLong again:


Yes, it seemed to me that handwaving was not good. But saying something precise and false–that we held money because it was the only store of value in a life-cycle context, and intergenerational trade was really important–seemed to me to be vastly inferior to saying something handwavey but true–that holding money allows us to transact not just with those we trust to make good on their vowels but with those whom we do not so trust, and that as a result we can have a very fine-grained and hence very productive division of labor. 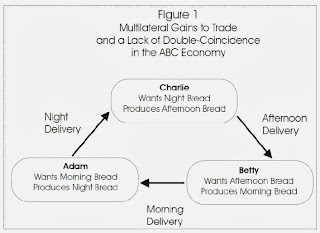 In the model economy above, there are no bilateral gains to trade (if we were to pair any two individuals, they would not trade). Sometimes this is called a "complete lack of coincidence of wants." There are, however, multilateral gains to trade: everyone would be made better off by producing when they can, and eating when they want to (from each according to their ability, to each according to their need).

I've always considered Wicksell's triangle a useful starting point for thinking about what might motivate monetary trade (sequential spot market trade involving a swap of goods for an object that circulates widely as an exchange medium). In particular, while there is an absence of coincidence of wants, we can plainly see how this does not matter if people trust each other (a point that DeLong alludes to in the quoted passage above). If trust is lacking--assume, for example, that only Adam is trustworthy--then Adam's IOU (a claim against period N output) can serve as a monetary instrument, permitting intertemporal trade even when trust is in short supply.

An exchange medium is valued in an OLG model for precisely the same reason it is in the Wicksell model or, for that matter, any other model that features a limited commitment friction. So if anyone tries to tell you that the OLG model of money relies on money being the only store of value to facilitate intergenerational trade, you now know they are wrong. The overlapping generation language is metaphorical.

In any case, as it turns out, the foundation of monetary exchange relies on something more than just a lack of trust. A lack of trust is necessary, but not sufficient. As Narayana Kocherlakota has shown (building on the work of Joe Ostroy and Robert Townsend) a lack of record-keeping is also necessary to motivate monetary exchange (since otherwise, credit histories with the threat of punishment for default can support credit exchange even when people do not trust each other).

Also, as I explain here, a lack of coincidence of wants seems neither necessary or sufficient to explain monetary exchange. (Yes, I construct a model where money is necessary even when there are bilateral gains to trade.)

Are any of these results interesting or useful? Well, I find them interesting. And I think the foundations upon which these results are based may prove useful in a variety of contexts. We very often find that policy prescriptions depend on the details. On the other hand, I have nothing against models that simply assume a demand for money. These are models that are designed to address a different set of questions. Sometimes the answers to these questions are sensitive to the assumed microstructure and sometimes they are not. We can't really know beforehand. That's why it's called research.

Finally, is a "rigorous microfoundation" like an OLG (Wicksell) model really necessary to deduce and understand the points made above? I suppose that the answer is no. But then, it's also true that motor vehicles are not necessary for transport. It's just that using them let's you get there a lot faster and more reliably.

Posted by David Andolfatto at 11:41 AM