There's been a lot of talk lately about the threat of global deflation. According to Christine Lagarde, Managing Director of the IMF:


“With inflation running below many central banks’ targets, we see rising risks of deflation, which could prove disastrous for the recovery.”

And closer to home:


Ms Lagarde’s comments were echoed by Charles Evans, president of the Chicago Fed. “The recent news on inflation has not been good,” he said in a speech on Wednesday. “Inflation is too low and is running well below the FOMC’s 2 per cent target.” 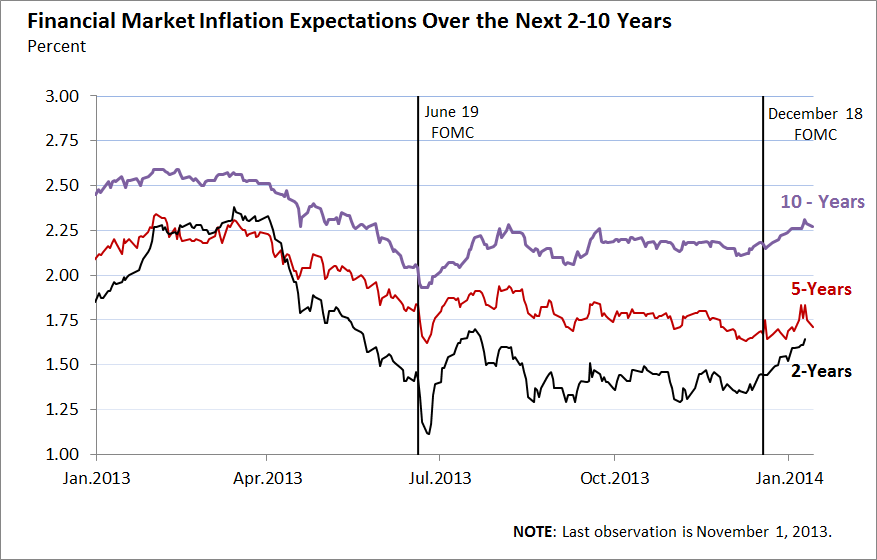 But it is interesting to note that immediately after the taper tantrum, inflation expectations recovered and stabilized, albeit at low levels (especially at the two and five year horizons). At the same time, nominal yields rose and remain elevated (with the 10 year hovering at or just below 3%).

What is even more interesting the reaction of inflation expectations after the December 2013 FOMC meeting, where the taper was actually implemented (the timing of which came as a surprise to most market participants). Short-run inflation expectations, in particular, appear to be on an upward trajectory. The effect is less evident at longer horizons.

I'm not going to offer any interpretation of what economic forces are at play here (I'll leave it up to you to offer your take on things in the comments section). One thing I can say though is that this data will provide at least a small measure of comfort to Fed policy makers concerned about the threat of deflation.

Posted by David Andolfatto at 6:43 PM