The hawkish nature of the Evans Rule

The headline above seems to capture the general sentiment surrounding the FOMC's recent  policy announcement. The recent move is characterized by many as "dovish" in nature because


...the Fed will keep short-term interest rates near zero as long as unemployment remains above 6.5 percent and the inflation it expects in one to two years is no higher than 2.5 percent. That replaces the previous plan to keep rates near zero until mid-2015. Given the slow pace of job growth, the current plan could mean that rates stay super-low past mid-2015.

Sure. Of course, the FOMC could alternatively have just extended the "lift off" date into the more distant future (as they have done in the past). But that's neither here nor there. What I want to talk about is the move to a state-contingent policy that makes explicit reference to the unemployment rate. St. Louis Fed President James Bullard has long advocated a move to state-contingent policy (see here). The actual form of the policy turned out to be one subsequently advocated by Chicago Fed President Charles Evans (hence, the "Evans Rule"). Maybe it's not perfect, but perhaps it's a move in the right direction.

In any case, here is the relevant part of the FOMC statement:


In particular, the Committee decided to keep the target range for the federal funds rate at 0 to 1/4 percent and currently anticipates that this exceptionally low range for the federal funds rate will be appropriate at least as long as the unemployment rate remains above 6-1/2 percent, inflation between one and two years ahead is projected to be no more than a half percentage point above the Committee’s 2 percent longer-run goal, and longer-term inflation expectations continue to be well anchored.

According to the Bloomberg article above,


This is essentially what Charles Evans, President of the Federal Reserve Bank of Chicago, has been arguing for over the last year. Dubbed the Evans Rule, the argument holds that monetary policy shouldn’t be tightened until the economy heals pasts a certain predetermined threshold.

This makes it sound like that by making explicit reference to the unemployment rate in a policy rule, one necessarily makes the rule more "dovish" in nature. A comment left by "K" in my previous post got me to thinking, however, that the opposite might be true in this case.

To see what I mean by this, consider the following visual depiction of the Evans Rule: 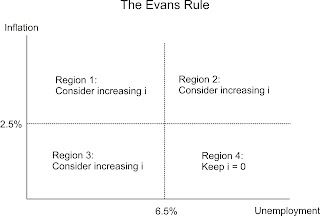 Since near term inflation is currently projected to be less than 2.5% and since the unemployment rate is currently above 6.5%, the U.S. economy is currently located in Region 4 of the diagram above. The Evans Rule in this case says: keep the policy rate at zero (actually, 0.25%). The rule also suggests that if the economy happens to drift into any one of the remaining four quadrants, the Fed would consider increasing the policy rate.

What role is the 6.5% threshold playing in the Evans Rule? One could make a case that its role is to dictate a tighter monetary policy over a greater range of circumstances.

To see this, simply ask what the diagram above would look like absent the 6.5% threshold on unemployment. Region 3 would now look like Region 4. That is, the rule would now specify that the policy rate should remain low over a greater range of unemployment rates.

Posted by David Andolfatto at 10:43 AM