Evil is the root of all money

A basic question in the theory of money is "why does money exist?"  Or, put another way: where does the demand for money come from?

The phenomenon of monetary exchange is so familiar to us that many may view the question ridiculous and/or the answer obvious. But if we stop and think about it, we'll discover that a surprising number of our everyday transactions are made without any reference to money at all. In particular, we regularly trade favors with family members, friends, and associates via implicit credit arrangements known as gift-giving economies. Indeed, the phenomenon seems quite prevalent in smaller (and more "primitive") communities throughout history.

So if money is not necessary in transactions--even credit transactions--then why is it used? Monetary theorists have been asking this question for a long time. The standard answer to be found in virtually every undergraduate macro textbook is that "money solves the double coincidence problem."  That is, without money, trade is restricted to barter transactions. And because it is difficult to find a trading partner who happens to want precisely what you have to sell and vice versa (a double coincidence), barter exchange is inefficient.

What does seem fundamental to the question is a lack of commitment. Kiyotaki and Moore label this friction an evil (hence, their play on Timothy, which I borrow as the title of this post). But the basic insight, as far as I can tell, seems attributable to Doug Gale (The core of a monetary economy without trust).

Before I proceed, I should take a moment to define what I mean by monetary exchange.  I define money to be an object that circulates as payment instrument across a sequence of spot exchanges. In the models I describe below, money takes the form of a perfectly divisible and portable income-generating asset. Equivalently, it takes the form of perfectly divisible, non-counterfeitable, and enforceable claims to an income-generating asset. It is not even important what form these claims take--they can be paper or book-entry objects, for example. The only requirement is that the claims constitute well-defined property rights (the same assumption is made by the fact of possession of a physical asset).

This economy features a complete lack of double-coincidence. That is, for any pairing of individuals, there are no bilateral gains to trade. On the other hand, this economy features a triple-coincidence of wants: there are multilateral gains to trade. The efficient allocation has everyone getting the good the value highly, and disposing of the good they value less. 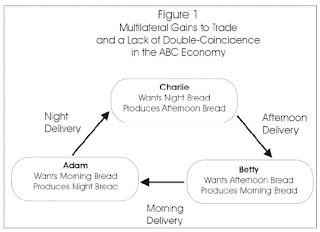 Notice that each person is in a position to issue an IOU promising a bread delivery at some specified date (morning, afternoon, or evening).

Just to start things off, imagine that our group meet at the beginning of time (just before morning) to arrange their affairs. If everyone is perfectly trustworthy, then everyone can just promise to "do the right thing" and that's the end of the story. That is, if people can commit to their promises, then monetary trade is not necessary, despite the lack of double coincidence.

Suppose instead that our group is not so trustworthy. Suppose Adam takes his morning delivery of bread and consumes it, but then refuses to make his promised night-delivery (consuming it for himself)? Well, in this case, our traders could agree to swap bread-machines at the beginning of time or--equivalently--swap securities (IOUs) representing clear titles to machines and their produce. (This latter type of exchange is what happens in an Arrow-Debreu securities market). In this case too, there is no role for an asset to circulate as a payment instrument.

O.K., let me now give the double-coincidence problem more bite by assuming that people meet sequentially and bilaterally over time. In particular, assume that Adam meets Betty in the morning, Betty meets Charlie in the afternoon, and then Charlie meets Adam in the evening. In each pairwise meeting, there are no gains to trade. But as long as people are committed to "doing the right thing," then this should pose no problem. In the absence of evil, money is not necessary.

But what if the members of this society are not so trustworthy? Then Adam asks for Betty's morning bread, Betty will demand a quid-pro-quo exchange of property. The only thing Adam has to offer is his night-bread machine--something that Betty has absolutely no taste for. Nevertheless, she will take it as payment because she expects to be able to use it as money at a later date. Indeed, Charlie should be willing to make his afternoon delivery to Betty in exchange for the night-bread machine because Charlie wants to consume at night. Evil--the lack of commitment--is a problem that can be solved here by the institution of monetary exchange. (Technical note: money is the unique solution if allocations cannot be conditioned on individual trading histories.)

My ideas about monetary exchange and the role of exchange media in general began to evolve after reading Gary Gorton's informative paper Slapped in the Face by the Invisible Hand (I recall telling Gary that getting slapped in the face by the visible hand was no less painful, but he only laughed).

I was intrigued by Gorton's description of how the shadow banking sector worked hard to create high-grade assets (e.g., senior tranches of diversified pools of mortgage debt) that ended up playing an important role in the payments system. The activity looks a lot like standard banking, i.e., issuing a set of senior liabilities backed by a diversified portfolio of assets. In standard banking, these senior liabilities (whether in the form of banknotes or book-entry items) circulate as money. The shadow banking sector's liabilities seem to have "circulated" as collateral in repo markets. The stuff sort of looked like money. And yet, it did not seem to be solving any double coincidence problem.

So here is my little model. There are only two people this time, Adam and Betty, but still 3 periods. Each person is in possession of two assets: a human capital asset, and some other asset (K) that produces some specialized product that only the original owner values.

The efficient trading pattern should be clear enough: Betty makes a morning delivery to Adam, Adam makes an afternoon delivery to Betty, and then both parties retire in the evening to consume the fruit of their special asset K.

As before, if people could commit to their promises, then a credit market implements the efficient allocation: Adam borrows bread from Betty and pays her back in the afternoon.

But what if people cannot be trusted to keep their promises? If I replaced "human capital" with the earlier bread machines, then a simple swap of bread machines would do the trick. But suppose it is impossible to transfer human capital in this way (indentured servitude is legally prohibited). What can be done?

Well, it would seem that one solution would be for Adam to use his special asset K to pay for his morning service. But why would Betty agree to such a transfer? After all, she does not attach an intrinsic value to Adam's special asset.

The answer seems clear. Betty could use Adam's K asset as money in the afternoon. In particular, she could offer to return the asset to Adam in exchange for the afternoon service she desires. Adam should be amenable to such an exchange as he attaches an intrinsic value to this special asset.

(Technical notes: the monetary object here cannot be playing any record-keeping role. Also, I realize that bilateral credit relationships can be sustained via the threat to suspend all future trade in the event of default. Understanding this does not diminish the role played by the special asset above--it can still be used to increase the threatened pain of default, thereby expanding the supply of credit.)

Relation to the repo market

Another way to implement the efficient allocation above is via a sale and repurchase agreement (repo) or, what amounts to be the same thing--a collateralized loan.

Note that the fundamental role played by Adam's special asset is that of a hostage. Betty is saying "you better pay me back, or you'll never see your beautiful asset again!"

And so, Adam and Betty might agree beforehand to a repo transaction: Betty agrees to buy the asset in the morning and resell back to Adam in the afternoon. Equivalently, Adam borrows a morning service using his special asset as collateral. In all of these transactions what is important is that property rights are transferred to Betty (the creditor).

How these rights are most efficiently transferred would seem to dictate the method of payment--i.e., whether by quid pro quo exchange, a repo agreement, or as a collateralized credit arrangement. In all of these cases, the asset is playing the same economic role--it is being used to support an intertemporal credit arrangement in the absence of commitment. In this sense, we could legitimately label the asset an exchange medium, even if it is not literally circulating from hand-to-hand (it is circulating from account-to-account, however).

A lack of double coincidence is neither necessary or sufficient to explain the demand for money. Evil appears to be the root of all money. The sermon is now concluded!

Posted by David Andolfatto at 8:18 AM