Is wage rigidity the problem? 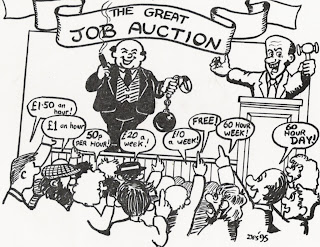 I've always been somewhat skeptical of these stories (note: Keynes himself did not emphasize stick wages in the GT--in fact, he argued that wage flexibility makes matters worse!).

My skepticism is fueled by stories like the one I read today: Majority of New Jobs Pay Lower Wages, Study Finds. An excerpt:


The report looked at 366 occupations tracked by the Labor Department and clumped them into three equal groups by wage, with each representing a third of American employment in 2008. The middle third — occupations in fields like construction, manufacturing and information, with median hourly wages of $13.84 to $21.13 — accounted for 60 percent of job losses from the beginning of 2008 to early 2010.

Lower-wage occupations, with median hourly wages of $7.69 to $13.83, accounted for 21 percent of job losses during the retraction. Since employment started expanding, they have accounted for 58 percent of all job growth.

Seems to me that even if nominal wages appear to be sticky within occupational groups, there is a high degree of de facto flexibility via occupational choices (on both the supply and demand sides).

My gut feeling is that theories that rely on some "wage stickiness hypothesis" are barking up the wrong tree. The assumption of wage stickiness is often supported by appealing to the empirical evidence. But as I explain here, wages that appear to be sticky to an econometrician may not be sticky in any economically meaningful sense. And as the evidence above suggests, there seems to be much more wage flexibility out there than is commonly assumed. But I'm willing to listen to the other side of the story...
Posted by David Andolfatto at 11:11 AM